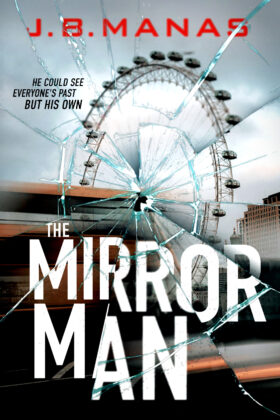 Tagline: He could see everyone’s past but his own.

Synopsis: Julian Black avoids people. Tormented by the ability to experience their most intimate, painful memories with a single touch, he reluctantly begins using his skill to assist tenacious Philadelphia police detective Lela Mars. But his life is soon upended when he’s captured by an equally gifted man claiming to be from his past—a suave master thief who can make people forget.

Now this mysterious stranger is ordering Julian to obtain a vital government secret that could shift the balance of world power. With Lela Mars as his only ally, Julian faces an impossible choice: Comply or pit his wits against the world’s most secretive and deadly crime organization.

“You know I can’t.”
“You’re in a prison of your own making,” she said, scrubbing the spaghetti pot. “You’ll never be like Cary Grant if you don’t leave the house.”
“I’ll never be like Cary Grant anyway, so I’m already ahead of the game.”
“Don’t say that,” she said. “You’re thin. You have a full head of brown hair. A nice, friendly face.”
“I’m afraid that doesn’t qualify me.”

“Wait a minute,” said Blaine, interrupting. “You must be mistaking me for James Bond. I like my drinks and women, but the similarities end there.”

“Good. I’ll put it simply then. The risk of catastrophic loss due to hostile actions by an unfriendly nation—with the West unable to defend itself—is significant and growing by the minute. It is not a matter of ‘if’ someone will plunge us all into the dark ages. It’s ‘when.’”

SARA was the most important asset on the planet. Did he really want the fate of the world decided by his own self-interest? This was a no-win situation if there ever was one.

She couldn’t imagine what it must be like doubting your own memory or having large chunks of it missing.

“We’re having Beef Wellington for dinner,” said Blaine. “It’s comfort food. I ordered us a bottle of 1990 Margaux to go with it.”
“I’d like to say I’m impressed, but I don’t know wine. I wouldn’t know the difference between a Margaux and a Manischewitz.”
“About fifteen hundred dollars. Twice that in taste buds.”

“It’s not just the money, Julian. Sometimes it’s the principle of the thing. I have a distaste for the privileged.”
Julian looked around the room. “The irony is staggering. We’re literally sitting in the Ritz.”

Barrie reached back and handed her a gun.
“You’re hereby licensed by MI5 to carry,” he said. “If this is our Waterloo,” he said, “let’s hope it has a better ending.”

Today it’s okay to make a few choices by going with your instincts.
Fame and fortune are coming your way.
Your moods signal a period of change.
More Fortunes >