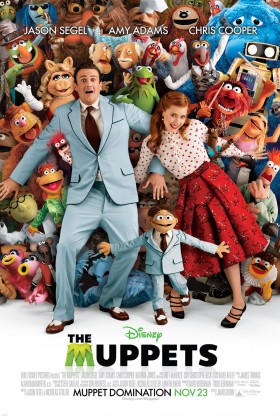 Based On: Characters created by Jim Henson

Synopsis: A Muppet fanatic with some help from his two human compatriots must regroup the Muppet gang to stop an avaricious oil mogul from taking down one of their precious life-longing treasures.

Declassified by Agent Palmer: Long Live The Muppets, Even if Disney owns them

Statler: I always dreamed we’d be back here.
Waldorf: Dreams? Those were nightmares!

Lew: We all agreed that a celebrity isn’t a people.

Statler: If I didn’t know any better, I’d say you were reciting some sort of important plot point.
Waldorf: I hope so. Otherwise I would’ve bored half the audience half to death.
Statler: You mean half the audience is still alive?

Gary: You always believe in other people, but that’s easy. Sooner or later, you gotta believe in yourself, too, because that’s what growing up is. It’s becoming who you want to be. You have to try.

Fozzie Bear: Wow, that was an expensive looking explosion! I can’t believe we had that in the budget.

Rowlf: How come you didn’t use me in the montage? I thought my story was pretty interesting.
Kermit the Frog: Rowlf?
Rowlf: Huh?
Kermit the Frog: You wanna get back together?
Rowlf: Okay.
Rowlf: Heh heh. Classic.

Jack Black: I’m being held captive by these weirdos!
Statler: Now you know how we’ve felt for the last forty years.

Kermit the Frog: Listen everybody, we’ve got nothing to be ashamed of. And you know why? Well because, thanks to Walter here we tried. And if we failed, we failed together and to me that’s not failing at all. And I don’t care what anybody says, I don’t care if no one believes in us because… I believe. I believe in you. And you. And you. You know what’s important isn’t this building or name, it’s each other. So I say fine, let’s just start from the bottom and work our way back up to the top. Let’s all walk out through these doors with our heads held up high, as a family because that’s what we are.

Uncle Deadly: Enough! Just because I have a terrifying name and an evil English accent, does not preclude the fact that, in my heart, I am a Muppet, not a Moopet! Looks like it’s I who will have the last laugh!
Tex Richman: What does that mean?
Uncle Deadly: It’s an idiom, you idiot, because you cannot laugh! Ha ha!

Rico Rodriguez: Are you one of the Teenage Mutant Ninja Turtles?
Kermit the Frog: Yes I am!

Statler: Is this movie in 3-D?
Waldorf: Nope! The Muppets are as one-dimensional as they’ve always been!

Look forward to great fortune and a new lease on life!
Today it’s okay to make a few choices by going with your instincts.
Fame and fortune are coming your way.
More Fortunes >