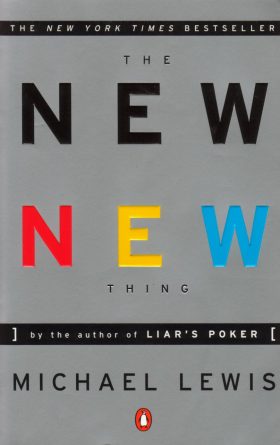 Synopsis: Lewis focuses on Jim Clark, the founder of several Silicon Valley companies, while diving into the entrepreneurial culture that dominated the area during the height of the Internet boom.

Declassified by Agent Palmer: In constant pursuit of “The New New Thing”

This book is about a search that occurs on the frontiers of economic life. Maybe the best way to introduce it is to explain why I bothered to write it.

But a certain type of person who has recently made it big in Silicon Valley could have made it big at no other time in history. He made it big because he was uniquely suited to this particular historical moment.He was built to work on the frontier of economic life when the frontier was once again up for grabs. He was designed for rapid social and technological change. He was the starter of new things.

The sensation that defines the search is the sweet, painful feeling that you get when you can’t think of a word that feels as if it’s right on the tip of your tongue.

Often starting with the best intentions, or no intentions at all, he turned people’s lives upside down and subjected them to the most vicious force a human being can be subjected to, change.

Back in 1921 Veblen had predicted that engineers would one day rule the U.S. economy. He argued that since the economy was premised on technology and the engineers were the only ones who actually understood how the technology worked, they would inevitably use their superior knowledge to seize power from the financiers and captains of industry who wound up on top at the end of the first round of the Industrial Revolution. After all, the engineers only needed to refuse to fix anything, and modern industry would grind to a halt. Veblen rejoiced at this prospect. He didn’t much care for financiers and captains. He thought they were parasites.

The venture capitalist John Doerr, Clark’s friend and Valley co-conspirator, like to describe the Valley as “the greatest legal creation of wealth in the history of the planet.”

“Growth is just another word for change,” said Romer, when he paused for breath between equations.

The metaphor that Romer used to describe the economy to noneconomists was of a well-stocked kitchen waiting for a brilliant chef to exploit it. Everyone in the kitchen starts with more or less the same ingredients, the metaphor ran, but not everyone produces good food. And only a very few people who wander in the kitchen find entirely new ways to combine old ingredients into delightfully tasty recipes. These people were the wealth creators. Their recipes were wealth. Electricity. The transistor. The microprocessor. The personal computer. The Internet.

“A certain tolerance for nonconformism is really critical to the process,” as Romer put it. Qualities that in eleventh-century France, or even 1950s America, might have been viewed as antisocial, or even criminal, would be rewarded, honored, and emulated, simply because they led to more…recipes. In short, the new theory conferred a stunning new status upon innovation, and the people responsible for it.

Irritation, for him, was not an ordinary low-level emotional event. Along with its brother, impatience, irritation was the sensation Clark felt most keenly. He was rarely irritated by machines, but he was most often irritated by people, especially when they stood between him and what he was after.

For that matter, it was as difficult to spot the silicon in Silicon Valley as it was to find the valley. The silicon had been Part One of the Valley’s story, and Part One was over.

“In 1955, I attempted to start a transistor business in California,” a Nobel Prize winner, the co-inventor of the transistor, William Shockley, told a U.S. congressional subcommittee in the late 1960s. “One of my motivations was that I had come to the conclusion that the most creative people were not adequately rewarded as the employees of industry.” The engineers Shockley talked into moving to the Valley and joining his company soon quit in a dispute with Shockley and created Fairchild Semiconductor; from there several moved on to create Intel; and from Intel and industry was born. Intel invented the microprocessor; the microprocessor made possible the boom in personal computing; the personal computer boom led inexorably to the Internet boom; where the Internet boom might lead nobody knew, though if Clark has is way, and history continued its trend, it would be bigger than the Internet. This mind-boggling chain of events had been triggered by the technical man’s desire to find his place where he could take what he felt was rightfully his.

At some point in the early 1990s the engineers had figured out that they didn’t need to build new computers to get rich. They just had to cook up new things for the computers to do. The thrill was in the concepts; the concepts were the recipes. The notion of what constituted “useful” work had broadened.

Eventually, I saw a kind of logic in his grazing: this was how he left himself open to accident. If nothing surprising or interesting was happening to him, he moved on until the situation corrected itself.

A stunning ignorance of mass tastes was a common problem with high technology. When a brilliant engineer dreamed up a product, he tended to build the sort of things only a brilliant engineer would appreciate. Typically, he overestimated the average person’s willingness to learn how to use some new machine and underestimated the cost of making the machine. When you page through the history of computing, you find a lot of very weird examples of just this.

The genealogy chart of Silicon Valley companies that decorated the walls of every office (Shockley spawned Fairchild, Fairchild spawned Intel, Intel spawned…) was a cheery face on a violent truth. The new companies often put the old ones out of business; the young were forever eating the old. The whole of the Valley was a speeded-up Oedipal drama. In this drama technology played a very clear role. It was the murder weapon.

The truth was that no casual observer could say when Clark was working and when he was playing. In part this was because, to Clark’s way of thinking, the big distinction wasn’t between “work” and “play” but between “creating new technology for money” and “creating new technology for pleasure.” In part it was because there was no distinction at all.

Any other human being would have been tossed into an asylum for thinking such grandiose thoughts. Clark had invented Jim Clark, and so he was taken seriously.

Now the adventure was reckless; Clark was making it up as he went along. Deep in his intuitive soul he thought “business plans” and “business models” and “management structures” were a waste of time. Time was the one commodity you could not waste if you wanted to make a billion dollars from the Internet.

“It was three A.M.,” he recalls. “I’m sitting there drinking espresso, listening to music, and writing up some notes about the software and… I could never explain this to anyone…not even my wife… I was so happy. I just laughed to myself.” [Stuart Liroff]

Even if he wanted to, which, occasionally, he claimed he did, he couldn’t stop trying to force the hand of the future. He was doomed to be forever searching for the new new thing.

Circumstance had made him an insider, but temperament kept him forever an outsider.

It read “Smart People Spend Hours Learning to Use Technology. Smarter People Find Ways to Weasel Out of It.”

Allan had cut the deal cut by every captain of one of Clark’s new enterprises: endure the humiliation of not fully understanding your job, and you might never need to work again.

The man who groped for the new new thing was in many ways ill suited for mainstream business.

His role in the Valley was suddenly clear: he was the author of the story. He was the man with the nerve to invent the tale in which all the characters–the engineers, the VCs, the managers, the bankers–agreed to play the role he assigned them. And if he was going to retain his privilege of telling the stories, he had to make sure that the stories had happy endings.

Very deep inside him Clark harbored the desire to be a good boy. The real rebels never exactly play the assigned role.

A plan was merely a theory of how he might spend his day; at all times it clashed in his mind with half a dozen other theories.

We would follow Columbus’s route, though we’d need only ten days to make the same trip. Imagine! The rest of us did; only Clark didn’t, or wouldn’t, or couldn’t. He was not one of those people who can be sustained for long by other people’s fictions. He required his own. He saw the romance in the journey, or at any rate he saw that there should be romance in it.

With computer people, the appearance of inaction masks the drama of their thoughts.

“If I died tomorrow, someone else could come into my world and pick up where I left off–because there is a logical way of doing it. A structure.” He paused. “If you want to be a good engineer you have to be willing to be replaceable. This who ‘I’m irreplaceable’ thing dives me bloody nuts.” [Robert]

That was the burden of the technical man. He knew the many ways technology could fail. And he realized that he alone was responsible for its success.

Clark was far happier doing something that he had just decided to do than something he had decided long ago. No decision was worth sticking to unless it had replaced several other decisions.

When asked what advice he might give other Serious American Executives who were talked into running one of these Silicon Valley businesses, he’d say, “It’s not about business plans. You can’t plan chaos.” [Mike Long]

He was a good winner; poor losers often are.

To let another into your heart, first let yourself in.
Fame and fortune are coming your way.
Good clothes open many doors. Go Shopping.
More Fortunes >