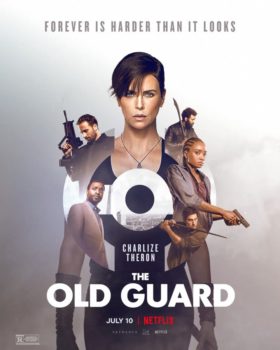 Tagline(s): Forever is Harder Than It Looks
Whatever it takes.

Based On: The Old Guard (Graphic Novel) by Greg Rucka

Synopsis: A covert team of immortal mercenaries is suddenly exposed and must now fight to keep their identity a secret just as an unexpected new member is discovered.

Declassified by Agent Palmer: The Old Guard is an Action flick With Heart (But Don’t Watch the Trailer First!)

Soldier: What is he? Your boyfriend?
Joe: You’re a child. An infant. Your mocking is thus infantile. He’s not my boyfriend. This man is more to me than you can dream. He’s the moon when I’m lost in darkness and warmth when I shiver in cold. And his kiss still thrills me, even after a millennia. His heart overflows with the kindness of which this world is not worth of. I love this man beyond measure and reason. He’s not my boyfriend. He’s all and he’s more.
Nicky: You’re an incurable romantic.

Andy: Well, sometimes you got to work with people, you don’t want to eat with.

Nile: So are you good guys or bad guys?
Joe: Depends on the century.

Nile: Andy did all this herself?
Booker: Yeah. That woman has forgotten more ways to kill than entire armies will ever learn.

Nile: So why is this happening to me?
Andy: I wish I knew.
Nile: You said you had answers.
Andy: I didn’t say you’d like them.

Andy: The world can burn for all I care.

Andy: I can’t remember what my mother looked like. Or my sisters. None of them.
Nile: Time steals it all away, I guess.
Andy: It’s not what time steals… it’s what it leaves behind. Things you can’t forget.

Merrick: How old are you?
Andy: Come closer and I’ll tell you.

Andy: It’s nearly impossible to disappear in the world we live in today.

Andy: We don’t get a say on how it ends, we never have. But we can control how we live.

Andy: I lead a group of immortals. An army I guess. Soldiers, fighters like you.

Andy: You’ve got questions kid, I get it. You want answers, get back in the car.

Quynh: I’ve never been burned alive before, what do you think it’s going to be like?

Andy: I know you are scared, Nile. Me and those three men in there will keep you safe.

To let another into your heart, first let yourself in.
Even the greatest of whales is helpless in the middle of a desert.
Today it’s okay to make a few choices by going with your instincts.
More Fortunes >