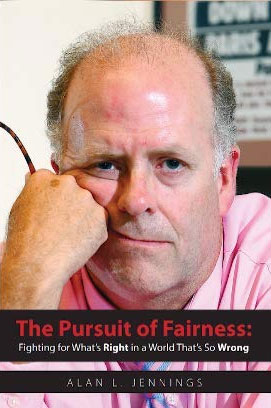 The Pursuit of Fairness

Tagline: Fighting for What’s Right in a World That’s So Wrong

Declassified by Agent Palmer: How To Make A Difference: A review of Alan Jennings’ The Pursuit of Fairness

Real people are too unwilling to pick these fights. And that’s just one of the reasons why we as a nation of communities are making so little progress.

So I’m fighting back, standing with the oppressed, with the marginalized, with the left out. I hated how Charlie Brown was knocked down. I got between the bully and his victim. When choosing sides for our backyard football or baseball games, or any other game I was always organizing, I often picked the kid who was likely to be picked last earlier so he didn’t get picked last.

My hope is that, when this book has lost any appeal it might ever have had people will say it moved dozens, maybe thousands, preferable every single nonprofit to do community problem-solving, advocacy, lobbying, and any other activity that will improve the lives of the folks next door.

And set term limits. This is one of my biggest beefs with nonprofit boards of directors. It is difficult enough to challenge an executive director effectively if there are long-term relationships between the board and top staff. Also, new ideas, new ways of looking at things, new ways of doing things are difficult to conjure if new blood isn’t coursing through the veins of the organization.

We have a saying: “There’s cheap. Then there’s CACLV cheap.” Our agency has consistently kept its administrative costs under 10 percent of our budget. That’s outstanding. Anything under 15 percent is pretty damn good. Donors, taxpayers, the public at-large all deserve responsible overhead expenses. We are obsessed with stewardship. You should be, too.

By definition, an advocate is one who speaks for or on behalf of another. There are plenty of reasons why we need advocates, although I wish there was not a single one. I wish each and every one of us, given the promise of democracy, had a voice, that we knew how to use it, we knew how to amplify that voice, how to bring together many voices in unison or even harmony to demand better for ourselves. Alas, our system does not lend itself very effectively to such a wish. Not everyone is comfortable challenging the system. Not everyone understands the rules. Not everyone has the resources to grease the skids and get politicians to pay attention. Not everyone speaks the language of power. Not everyone can find the words. Not everyone has the self-esteem to feel sufficiently self-confident to seize an opportunity. Not everyone is able-bodied. And not everyone has any confidence that their voice would make anything better. That’s called hopelessness.

Don’t Recruit Wimps
I’m not saying you only want people with testosterone coursing through their bodies. I am saying that you need people with a backbone, people who are resolved, people who are willing to throw a high, inside fastball, if necessary. People in our field tend to be tolerant; they try to see, consider and put themselves in the position of others in the debate. Get over that. People in positions of power can afford to be genteel. We can’t.

They say that patience is a virtue. I don’t agree. Patience is the luxury of the powerful, the affluent, the comfortable. Don’t be patient on behalf of those who can make no such claims.

I’m guilty of letting my obsession with justice, my intensity, passion, anger, empathy, sympathy, impatience get the best of me.

You see, George Bailey was gone, and, with him, the quaint old days when the same company that booked the loan celebrated with the homeowner when the mortgage was paid off.

When it comes right down to it, our ideology is useless without its practical application.

Your moods signal a period of change.
Nothing in the world can take the place of persistence.
The path of life shall lead upwards for you.
More Fortunes >