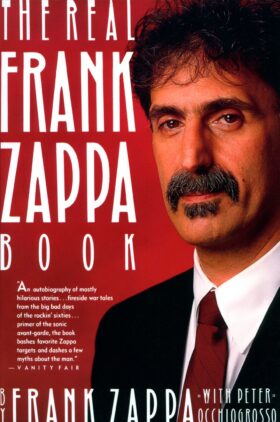 Synopsis: Inside the life and mind of Frank Zappa.

Declassified by Agent Palmer: The Real Frank Zappa Book is Worth Your Time, No Matter Who You Are

One of the reasons for doing this is the proliferation of stupid books (in several languages) which purport to be About Me. I thought there ought to be at least ONE, somewhere, that had real stuff in it. Please be advised that this book does not pretend to be some sort of ‘complete’ oral history. It is presented for consumption as entertainment only.

It’s hard to be a drummer-in-training, because there are very few apartments that are soundproof enough to practice in. (Where do good drummers really come from?)

People who have never been in a rock band maintain the most ridiculous fantasies about how glamorous and exciting and endlessly gratifi-ing Life On The Road must be. It’s not that I haven’t had a few laughs out there–but let’s just say the ration isn’t that terrific.

“Information is not knowledge, knowledge is not wisdom, wisdom is not truth, truth is not beauty, beauty is not love, love is not music. Music is the best.”  – Frank Zappa, Joe’s Garage, 1979

When someone writes a piece of music, what he or she puts on the paper is roughly the equivalent of a recipe–in the sense that the recipe is not the food, only instructions for the preparation of the food. Unless you are very weird, you don’t eat the recipe.

With the 1988 band, I didn’t have to play very much in the show, because the focus was on the horn arrangements and the vocals. I didn’t have to play fifteen-minute guitar solos, and, really, there’s not much of a market for that anymore–the interest span of the audience has shriveled to about eight bars, and in those eight bars, you are expected to play every note you know.

One of the things I’ve said before in interviews is: Without deviation (from the norm), ‘progress’ is not possible.”
In order for one to deviate successfully, one has to have at least a passing acquaintance with whatever hormone expects to deviate from.

People who think that classical music is somehow more elevated than ‘radio music’ should take a look at the forms involved–and at who’s paying the bills. Once upon a time, it was the king or Pope So-and-so. Today we have broadcast license holders, radio programmers, disc jockeys, and record company executives–banal reincarnations of the assholes who shaped the music of the past.

I feel that if you live life in pursuit of ‘certification,’ ‘appreciation,’ or ‘compensation’ in any form from your parents, you’re making a big mistake. The sooner you can say, “Okay, they’re them and I’m me, and let’s make the best of it,” the better off you’re going to be.
We could improve worldwide mental health if we acknowledge that parents can make you crazy.

“All the old history was written for the amusement of the ruling classes. The lower classes couldn’t read, and their rulers didn’t care about remembering what happened to them.”
My Dad (something he told me when I was a kid)

(It isn’t necessary to imagine the world ending in fire or ice–there are two other possibilities: one is paperwork, and the other is nostalgia. When you compute the length of time between The Event and The Nostalgia For The Event, the span seems to be about a year less in each cycle. Eventually within the next quarter of a century, the nostalgia cycles will be so close together that people will not be able to take a step without being nostalgic for the one they just took. At that point, everything stops. Death by Nostalgia.)

I would say that today, dishonesty is the rule, and honesty the exception. It could be, statistically, that more people are honest than dishonest, but the few that really control things are not honest, and that tips the balance.
I don’t think we have an honest president. I don’t think that he is surrounded by honest people. I don’t believe that most of the people in Congress or in the Senate are honest. I don’t think that most people who head up businesses are honest. We have let them get away with it because we’re not honest enough to face up to the fact that we are ‘owned and operated’ by a bunch of really bad people.

There are phases that kids go through to develop the social skills necessary to work and interrelate with other people. Somewhere along the line, you’re either going to learn to be a ‘good employee’ or a ‘good boss’; there’s not much in between.

Why, then, do so many Americans, while professing to adore Freedom and Democracy, support–even demand–that actions be taken buy their own government which bear a striking resemblance to Old-Style Evil Empire Communism? (Censorship? Disinformation? The Public Library Spy-Squealer Program?) Are we really that unspeakably stupid?

Failure is nothing to get upset about. It’s a fairly normal condition; an inevitability in ninety-nine percent of all human undertakings. Success is rare–that’s why people get so cranked up about it.

Let’s finish this up now, someone is waiting for you on that.
A difference, to be a difference, must make a difference.
Your moods signal a period of change.
More Fortunes >