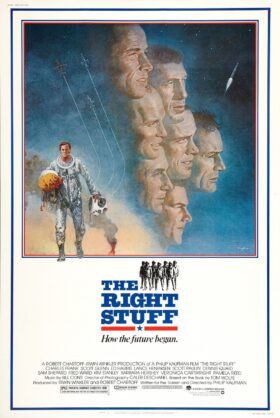 Tagline(s): By flying higher and faster than any other man had ever dared before, Chuck Yeager set the pace for a new breed of hero. Those that had just one thing in common…THE RIGHT STUFF.
The spectacular story of America’s first astronauts.
How the future began.
America was looking for a hero who had what it takes to become a legend. America found seven of them.

Based On: The Right Stuff by Tom Wolfe

Synopsis: The story of the original Mercury 7 astronauts and their macho, seat-of-the-pants approach to the space program.

Declassified by Agent Palmer: After All this Time The Right Stuff Still Inspires Despite Historical Inaccuracies

Narrator: There was a demon that lived in the air. They said whoever challenged him would die. Their controls would freeze up, their planes would buffet wildly, and they would disintegrate. The demon lived at Mach 1 on the meter, seven hundred and fifty miles an hour, where the air could no longer move out of the way. He lived behind a barrier through which they said no man could ever pass. They called it the sound barrier.

John Glenn: Annie, listen to me, OK? You listening? If you don’t want the Vice President or the TV networks or anybody else to come into the house, then that’s it, as far as I’m concerned. They are NOT coming in, and I will back you all the way, a hundred percent on this. And you tell them that, OK? I don’t want Johnson or any of the rest of them to set as much as one TOE inside our house.
Annie Glenn: OK.
John Glenn: You tell them that- that Astronaut John Glenn told you to say that.

Chuck Yeager: I’m a fearless man, but I’m scared to death of you.
Glennis Yeager: Oh no you’re not. But you oughta be.

Gordon Cooper: Look, the man has got to go! Now it’s either that or we get out the lug wrench and pry him out…
Chief Scientist: Do it… in the suit.
Gordon Cooper: José, permission to wet your diapers anytime son.

Recruiter: Funding. That’s what makes your ships go up. I’ll tell you something, and you guys too: No bucks, no Buck Rodgers.

Chuck Yeager: Monkeys? You think a monkey knows he’s sittin’ on top of a rocket that might explode? These astronaut boys they know that, see? Well, I’ll tell you something, it takes a special kind of man to volunteer for a suicide mission, especially one that’s on TV. Ol’ Gus, he did all right.

Narrator: The Mercury program was over. Four years later, astronaut Gus Grissom was killed, along with astronauts White and Chaffee, when fire swept through their Apollo capsule. But on that glorious day in May 1963, Gordo Cooper went higher, farther, and faster than any other American – 22 complete orbits around the world; he was the last American ever to go into space alone. And for a brief moment, Gordo Cooper became the greatest pilot anyone had ever seen.