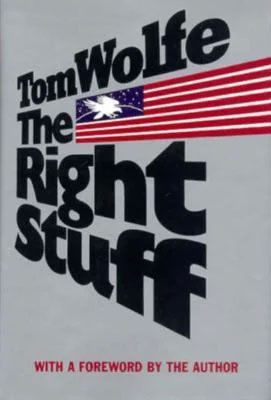 Synopsis: Millions of words have poured forth about man’s trip to the moon, but until now few people have had a sense of the most engrossing side of the adventure; namely, what went on in the minds of the astronauts themselves – in space, on the moon, and even during certain odysseys on earth. It is this, the inner life of the astronauts, that Tom Wolfe describes with his almost uncanny empathetic powers, that made The Right Stuff a classic.

Declassified by Agent Palmer: Wolfe certainly has The Right Stuff to open the space race

…there was a better than even chance, a 56 percent probability, to be exact, that at some point a career Navy pilot would have to eject from his aircraft and attempt to come down by parachute.

Kaboom. Believers in the right stuff would rather crash and burn.

Ever since the end of the Second World War the phrase “govern ment bureaucracy” had invariably provoked sniggers. But a bureaucracy was nothing more than a machine for communal work, after all, and in those grueling and gorgeous weeks of the spring of 1961 the men and women of NASA’s Space Task Group for Project Mercury knew that bu reaucracy, when coupled with a spiritual motivation, in this case true pa triotism and profound concern for the life of the single-combat warrior himself-bureaucracy, poor gross hideously ridiculed twentieth-century bureaucracy, could take on the aura, even the ecstasy, of communion.

For he (Shepard) was introducing the era of precreated experience. His launching was an utterly novel event in American history, and yet he could feel none of its novelty. He could not feel “the awesome power” of the rocket beneath him, as the broadcasters kept referring to it. He could only compare it to the hundreds of rides he had taken on the centrifuge at Johnsville. The memory of all those rides was imbedded in his nervous system.

Today it’s okay to make a few choices by going with your instincts.
Things are turning for the bright side.
Good clothes open many doors. Go Shopping.
More Fortunes >