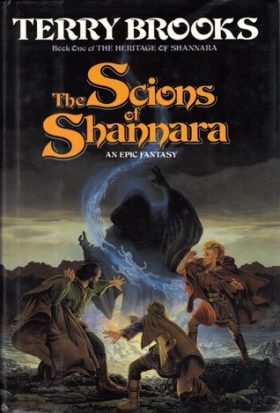 The Scions of Shannara

Tagline: Book One of The Heritage of Shannara

Synopsis: Since the death of Allanon, the Four Lands has changed, though not all of the magic is gone. And when a message from the Shade of Allanon reaches the Shannara bloodline, Par, Walker, and Wren are tasked to save the four lands with three charges.

Declassified by Agent Palmer: The Scions of Shannara: Is A Great Start for The Heritage of Shannara Series

They came to Varfleet because Varfleet was an open city, free of Federation rule, a haven for outlaws and refugees but also for ideas, a place where people still listened with open minds, a place where magic was still tolerated–even courted.

He had grown tired of telling the same stories to the same few listeners over and over. Others needed to hear the stories as well, to know the truth about the Druids and the magic, about the struggle that preceded the age in which they now lived.

They had established their positions on these subjects fairly well by this time, positions that, for the most part, weren’t within a week’s walk of each other. That being the case, they were reduced to communicating with each other across vast stretches of intractability.

He was a visionary, but he lacked Coll’s sensitivity. He foresaw so clearly life’s possibilities, but Coll was the one who understood best its sacrifice.

“…Don’t wait for events to catch up with you; go out and meet them head-on!” – Morgan Leah

The whole world belonged to her, because she was tied to no part of it. She could go where she wanted and do what she pleased, and that was more than most could say.

No moon showed itself, it was the promised time when the sun’s pale sister wore black.

“Magic is as much a force of nature as the fire at the earth’s core, the tidal waves that sweep out of the ocean, the winds that flatten forests or the famine that starves nations. It does not happen and then disappear without effect!” – Cogline

“Life has always been cyclical. Power comes and goes; it takes different forms. Once, it was science that gave mankind power. Of late, it has been magic.” – Cogline

Magic in and of itself–if you believed in it as Par did–was never bad or good; it was simply power. That was the lesson of the wishsong. It was all in how the magic was used.

“Confound it, Par, how can we lose by trying when by trying we have everything to gain?” – Morgan Leah

“The Federation has saddled the Four Lands with three hundred years of revisionist history.” – Coll

Padishar Creel was either very brave or very foolish, and it bothered the Valeman that he wasn’t sure which it was.

It seemed logical despite the old man’s protestations that his time was past–but Walker was astute enough to recognize that where Druids and their magics were concerned logic often traveled a tortuous path.

“There hasn’t been a single moment during this entire expedition or trek or whatever you want to call it that you haven’t needed help from someone.” The dark eyes narrowed. “Don’t misunderstand me. I’m no saying you were the only one. We’ve all needed help, needed each other–even Padishar Creel. That’s the way life works.” One strong hand lifted and a finger jabbed Par roughly. “The thing is, everyone but you realizes and accepts it. But you keep trying to do everything on your own, trying to be the one who knows best, who has all the answers, recognizes all the options, and has some special insight the rest of us lack that allows you to decide what’s best. You blind yourself to the truth. Do you know what, Par? The Mole, with his family of toy animals and his underground hideout–you’re just like him. You’re exactly the same. You create your own reality–it doesn’t matter what the truth is or what anyone else things.” – Coll

He became convinced that he had learned all from it that he was going to learn. There was no other course of action left to him but to go in search of the Black Elfstone and to discover by doing what he could discover in no other way.

Sometimes you had to make your own luck.

He would never heal–not completely. Having once used the magic, he was changed irrevocably. He couldn’t give it up; he wasn’t the same man without it. Though he had possessed it only briefly, the effect of having had it for even that long was permanent. He hungered to have it back again. He needed to have it back. He was lost without it; he was confused and afraid. That was the reason he had failed to act during the battle with the Creeper. It was not that he lacked a sense of what he should do or how he should do it. It was that he no longer could invoke the magic to aid him.

He was isolated, an island within the heart of a battle that had somehow caught him up, lost in a sea of indecision and doubt.

“It is only a word that others have used to label something they don’t fully understand. If you can forget the lies you have been told and think of the possibilities, you will be better able to understand what I am telling you.” Rimmer Dall