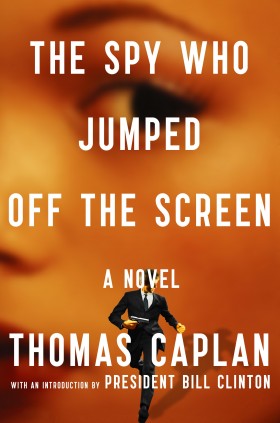 The Spy Who Jumped Off the Screen

Synopsis: Former covert operative Ty Hunter, has become, almost by accident, the number one film star in the world. When he is recruited on a clandestine mission to thwart the transfer of nuclear warheads into rogue hands, he must deploy every skill he has as an actor, soldier, and spy. Donning his fame as a disguise, Ty matches wits and muscle with the enigmatic billionaire Ian Santal and his nefarious protégé Philip Frost-two supremely sophisticated adversaries- even as he falls in love with the entrancing young woman closest to them both, the jewelry designer Isabella Cavill.

Declassified by Agent Palmer: The Spy Who Jumped Off the Screen by Thomas Caplan is a Wonderful Read

You’re judged by the company you keep—

It had always amazed the young man how incompletely most people understood the world in which they lived, how innocent they remained of the forces that determined their fate.

“In that case, Andrej, I’ll tell you: The world’s simply not paying attention. It’s asleep.”

Lacking the instinct to connect the dots of life’s affairs, they went about their business in workmanlike fashion, focusing only as much concentration as was required upon their jobs and reserving all the rest for the mix of joy and disappointment, anxiety and satisfaction they called their personal lives.

“There are no differences so profound as those between very similar peoples,” Philip said. “Who is more like an Englishman than an Irishman or more like a Jew than an Arab.”

“Real admiration is based in fear,” Andrej declared coolly.

The business had changed. What business hadn’t? He was grateful to have cleared its hurdles when he had, even as he recognized that success was never a passive state for long. One rose or fell. Stars formed or died.

“The world’s gone mad,” Ian said. “At least too many of the people in it have.”

Such was the nature of the human condition., locked in its morphing death dance of evil and good, he thought, that no individual could be expected to fix with clarity. “History,” he [Ian] said “has arrived at stranger conclusions.”

“There’s a first time for everything,” Garland White replied. “Do you know what your last commanding officer wrote about you? He said Hunter will do ‘fifty percent more to make a thing five percent better.’ That’s it in a nutshell. You are a proven performer. And you’re right: We have nowhere else to turn. If we’re wrong, then it was all in a good cause. But if our suspicions prove not to be unfounded and the wild animals should get free of the zoo, if something does happen, what then, Ty? We would have no notion of what or where or when or who was behind it. Then again, at T plus one second will anyone be counting!”

“Granted, there’s always the danger you’ll turn out to be the cat we can’t walk back,” [George Kenneth]

“We can’t escape the times we live in,”

“A man on the move needs a place where he can stop,” Dorothy said, “and just be who he is for a little while.”

A man’s past is part and parcel of his future, he reminded himself as he reawakened. The context of his or any life was inescapable.

When the fates aligned, Philip mused, success came almost too easily, but when they didn’t, even the most heroic efforts could not always prevent calamity.

By example Ian had taught Philip his technique of conducting the most sensitive conversations in public, on the move, and in venues that no one who might have an interest in overhearing them could predict.

“What sorts of questions?” Philip replied.
“Banal on the surface, but they are questions with implications. In my experience those are the most dangerous kind.” [Andrej]

“The essential thing, at moments such as these, is to retain a Zen-like calm, to keep one’s balance and distance from events.” [Andrej]

What was beauty anyway, but a moment in time.

Imagining the trajectory of her career paralyzed her, and she had long ago learned that the only thing that could dispel anxiety was work.

“Another perk of the undeserving, but then you can’t fight nature. Women are affected by the physical attributes of men, Ty. There’s no getting around that fact. From fourteen to eighteen, it’s the face that counts with them. From eighteen to twenty-five, maybe thirty, it’s the body. After then, except for a precious few, it’s the wallet.” [Oliver]

“Indeed,” Oliver agreed. “Anyway, you know what they say. There are no such things as secrets, only people who find things out a little later.”

“What you fail to understand is that understatement never flourished for very long where overstatement is possible.”

“Listen, I’m nothing if not brutally honest with myself. That young woman is a perfectionist, and I am rather blatantly imperfect.”

‘A man should both appreciate and fear his rivals.’

“…This is not our grandfathers’ world, where the righteous and the evil retreated to their separate base camps. We live side by side in a world of very few uniforms now.”

“That could be a perilous place to be in a collision,” Raisa suggested.
“The much-predicted clash of civilizations?” Ina asked. “Not to worry, civilizations don’t collide. Ideas do.”

“The future is and always has been scary,” Ian mused., “but it has always come to pass. Strength creates resistance that in turn creates strength and so on. The world survives because, before it’s too late, people inevitable find an equilibrium point from with they can manage to stand each other off, just as we, as individuals, survive by finding a similar point at which out warring instincts cancel out each other.”

“It’s as though Matt Damon really were Jason Bourne, isn’t it?” [Isabella]

“Those kids!” Cotton exclaimed. “They never cease to amaze. When I was a boy, there was a run of films about aliens arriving on earth from outer space and taking control of all the levers of power. Some of them were so realistic they gave you nightmares for weeks. Who could have imagined that those aliens would turn out to be our own children?”

“In my experience it often comes down to a tribal thing with politicians and civil servants,” Cotton reflected. “Sooner or later a line of demarcation develop between those who believe the world is abstract and those who know it’s real.”

“What’s privacy?” Bingo said. “Only people above a certain age remember or expect it.”

“We’ve got to get this right,” Ty said. “My dad always said, ‘There are many wrong ways to do the right thing—’”
“‘But no right way to do the wrong thing,’” Oliver chimed in, completing the maxim.