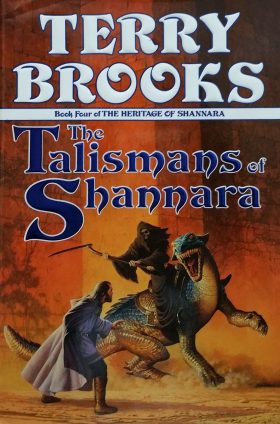 The Talismans of Shannara

Tagline: Book Four of The Heritage of Shannara

Synopsis: The Shadowen still swarm over the Four Lands, poisoning everything with their dark magic. And their leader is determined to destroy all the Scions of Shannara. For Walker Boh, he dispatches the Four Horsemen. For Wren, he sends an untrue friend. And for Par, he devises the most terrible fate of all. With these traps cleverly laid, the charges given by the shade of the Druid Allanon are doomed to failure—unless Par can discover a way to harness the power of the Sword of Shannara.

Declassified by Agent Palmer: Lessons Learned from Fantasy: A Spoiler Free Review of The Talismans of Shannara

The danger of grappling with the beast is that you will become it.

He was sick of questions without answers, of secrets being kept from him, of lies and twisted half-truths that circled him like scavengers waiting to feast. If he could break just a single link of this chain of uncertainty and confusion that bound him, if he could sever but a single tie . . .

“Love seems to cause all sorts of foolish talk.” – Padishar

“Hasn’t it always been left to the Ohmsfords to discover the truth of things on their own? Gamesplaying, you once called it. But isn’t it really much more than that? Isn’t it the nature of life? Experience comes from doing, not from being told. Experiment and discover. Seek and find. It is not the machinations of the Druids that compel us to do so; it is our need to know. It is, in the end, the way we learn, I think it must be your way as well, Walker?” – Cogline

So little distance traveled to come so far, he mused. So little time to have discovered so much.

He was weary of having questions with no answers.

Strength alone was not enough. The power of the Druid magic was impressive, but it had never been enough by itself even for those Druids come and gone. Knowledge was necessary as well. Cleverness, Resolve. Unpredictability. This last most of all, perhaps–an intangible that was the special province of survivors.

Famine, Pestilence, War, and Death the Four Horsemen of the Apocalypse, come to claim his soul. But on this day he was Fate, and Fate would determine the destiny of all.

The old man had been his friend. He had cared about him, had looked after him in ways that on reflection Walker knew were the ways that a father looked after a son. He had instructed and guided and been present when he was needed. Even when Walker was grown, and there was that distance between them that comes when fathers and sons must regard themselves as equals without ever quite believing it, Cogline stayed close in whatever ways Walker would allow. They had fought and argued, mistrusted and accused, and challenged each other to do what was right and not what was easy. But they had never given up on or forsaken each other; they had never despaired of their friendship.

It was that way with everyone’s life. All people kept parts of who and what they were and how they had lived to themselves, things that belonged only to them, things that no one else was meant to share. At death, those things were dark holes in the memories of those who lived on, but that was the way it must be.

He felt some bitterness beginning to fade. The bitterness was wrong. Regrets were wrong. They were chains that bound you tight and dragged you down. Nothing good could come of them. What was needed was balance and perspective if the future was to have any meaning. Walker could remember and should. But memories were for shaping what would come, for taking the possibilities that lay ahead and turning them to the uses for which they were intended.

The past was a reminder of the vicissitudes of life, chance playing off opportunity and giving back what she would.

And memories, he knew, were not glass treasures to be kept locked within a box. They were bright ribbons to be hung in the wind.

He tried not to think too closely about what might be happening there. Too much imagination could be a dangerous thing.

The words repeated themselves, a litany in his mind, mixing with the whisper that held him bound to his course of action, to the certainty that it was right. He could not explain the feeling, could not justify it beyond the believe that sometimes you did not question, you simply accepted. He was torn by the truth he sensed in it and the possibility of its fraud. Reason advised caution, but passion insisted on blind commitment. The feelings warred within him as he waited, pulling and twisting into knots.

Life delegated responsibility as need required and never in equal shares. The trick was in not being afraid when you learned that this was so.

Well, yes and no. It was so. And not. Like so many things, the truth lay somewhere in between.

Mistakes and contradictions, misconceptions and false beliefs–they knotted together to make the madness possible. Reason had no place here, Wren thought disgustedly. But then in war, she supposed, it seldom did.

This was the end of their quest, the conclusion of a journey that had stripped them of everything but their determination to go on.

“The power that gives life to the earth and its creatures is too dangerous to tamper with.” – Walker

“The Druids are the land’s conscience. They do not simply manipulate and control. The seek out what troubles the land and her people, and they help to put it right again. It might seem sometimes as if they serve only their own purposes, but the misperception comes from fear of the power they wield. It remains a judgment for each of them, of course–for me, as well, I know–but the reason for their being comes from a need to serve.” – Walker

You are interested in higher education, whether material or spiritual.
Let’s finish this up now, someone is waiting for you on that.
Even the greatest of whales is helpless in the middle of a desert.
More Fortunes >