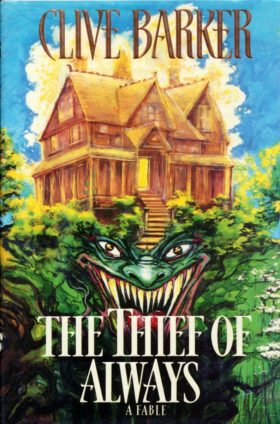 The Thief of Always

Synopsis: Mr. Hood’s Holiday House has stood for a thousand years, welcoming countless children into its embrace. It is a place of miracles, a blissful rounds of treats and seasons, where every childhood whim may be satisfied…

There is a price to be paid, of course, but young Harvey Swick, bored with his life and beguiled by Mr. Hood’s wonders, does not stop to consider the consequences. It is only when the House shows it’s darker face — when Harvey discovers the pitiful creatures that dwell in its shadows — that he comes to doubt Mr. Hood’s philanthropy.

The House and its mysterious architect are not about to release their captive without a battle, however. Mr. Hood has ambitious for his new guest, for Harvey’s soul burns brighter than any soul he has encountered in a thousand years…

Declassified by Agent Palmer: The Thief of Always by Clive Barker: A Fable for Now, A Fable for Always

I’ve got nothing better to do,’ Harvey said, without looking round.
‘Well then, you can make yourself useful,’ his Mum said.
Harvey shuddered. Useful? That was just another word for hard labour.

We short folk gotta watch out when it’s raining this hard. One wrong step and you’re swimming.
Rictus

‘Questions rot the mind!’ he called back as he went. ‘Keep your mouth shut and we’ll see what comes your way!’

The House was more wonderful inside than out. Even on the short journey to the kitchen Harvey glimpsed enough to know that this was a place built for games, chases and adventures. It was a maze in which no two doors were alike. It was a treasure-house where some notorious pirate had hidden his blood-stained booty. It was a resting place for carpets flown by djinns, and boxes sealed before the Flood, where the eggs of beasts that the earth had lost were trapped and waiting for the sun’s heat to hatch them.

‘It’s perfect!’ Harvey murmured to himself.
Mrs. Griffin caught his words. ‘Nothing’s perfect,’ she replied.
‘Why not?’
‘Because time passes,’ she went on, staring down at the flowers she’d cut. ‘And the beetle and the worm find their way into everything sooner or later.’

‘All right,’ he said, allowing himself a tiny smile. ‘There’ll be other nights.’
‘Always,’ said Wendell. The reply pleased him ‘That’s what this place is,’ he said, as the light went out. ‘It’s the House of Always.’

As he spoke he realized he was breaking the rule he’d made on the porch: whether the winged creature was real or not didn’t matter. This was a place of illusions. Wouldn’t he be happier here if he just stopped questioning what was real and what wasn’t?

She waved her hand casually in Harvey’s direction, and he felt the power that had filled his limbs and transformed his face drain out of him. It was a relief, of course, to feel the magic unmade, but a little part of him mourned the loss. In a matter of moments he was once again an earth-bound boy, wingless and weak.

Evil, however powerful it seemed, could be undone by its own appetite.

‘We’re all tempted to do things we regret once in a while. Sometimes we choose badly and make mistakes.’

There were five doors ahead of him, every one of them ajar a few inches, as if to say:
There are no secrets here, not from a boy who wants the truth. Come and look! Come and see! If you dare.

There were enough real reasons to be fearful here without inventing more.

‘I only took the days you didn’t want,’ Hood protested. ‘The rainy days. The grey days. The days you wished away. Where’s the crime in that?’
‘I didn’t know what I was losing,’ Harvey protested.
‘Ah,’ said Hood softly, ‘but isn’t that always the way of it? Things slip from your fingers and when they’re gone you regret it. But gone is gone, Harvey Swick!’

‘We’re both thieves, Harvey Swick. I take time. You take lives. But in the end we’re the same: both Thieves of Always.’

‘You want something quiet and powerful. Tigers! That’s what you want! Tigers!’
No sooner said than they padded into view in the hallway below; two white tigers, with eyes like polished gold.
‘Nowhere to keep ‘em!’ Harvey said.
‘That’s practical!’ Rictus conceded. ‘I like a practical kid.’

Tears started to cloud his eyes. He wiped them away with his fists. They were both useless, fists and tears.

Today it’s okay to make a few choices by going with your instincts.
Courtesy is the password to safety.
A difference, to be a difference, must make a difference.
More Fortunes >