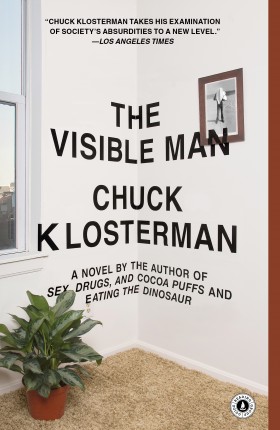 Synopsis: Therapist Victoria Vick is contacted by a cryptic, unlikable man who insists his situation is unique and unfathomable. As he slowly reveals himself, Vick becomes convinced that he suffers from a complex set of delusions: Y__, as she refers to him, claims to be a scientist who has stolen cloaking technology from an aborted government project in order to render himself nearly invisible. He says he uses this ability to observe random individuals within their daily lives, usually when they are alone and vulnerable. Unsure of his motives or honesty, Vick becomes obsessed with her patient and the disclosure of his increasingly bizarre and disturbing tales. Over time, it threatens her career, her marriage, and her own identity.

Declassified by Agent Palmer: A Spoiler Free Book Review of “The Visible Man” by Chuck Klosterman

“The creation of expectation is its own independent process…”

“Even the invisible are insecure. It’s the most universal problem we have. It’s so universal, it might not even count as a problem.”

“Kids live through computers now. They make all their friends over the Internet, so they don’t understand how non-verbal communication works. They don’t understand body language or casual sarcasm. They love irony, but they never understand any joke they don’t make themselves. In a hundred years, no one will be able to talk in public. Talking will be like blacksmithing.”

Even the greatest of whales is helpless in the middle of a desert.
The path of life shall lead upwards for you.
Let’s finish this up now, someone is waiting for you on that.
More Fortunes >