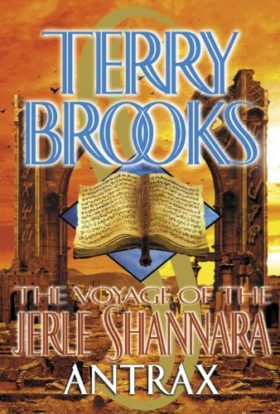 The Voyage of the Jerle Shannara: Antrax

Synopsis: In his last acclaimed novel, Ilse Witch, a brave company of explorers led by the last Druid, Walker Boh, traveled across unknown seas in search of an elusive magic. Yet perhaps Walker and his team were lured there for sinister, unforeseen purposes . . .

Now in Antrax, as the crew aboard the airship Jerle Shannara is attacked by evil forces, the Druid’s protege, Bek Rowe, and his companions are pursued by the mysterious Ilse Witch. Meanwhile, Walker is alone, caught in a dark maze beneath the ruined city of Castledown, stalked by a hungry, unseen enemy.

Declassified by Agent Palmer: The Voyage of the Jerle Shannara: Antrax is a Wonderful Continuation and a Definite Book Two

Hesitation and doubts were for others, she thought dismissively, for those who would never find their own way in the world and never make anything of their lives that mattered.

Your father was a scholar and did not believe in violence. In his mind, the Druids represented violence. But violence doesn’t care anything about whether or not you believe in it. It comes looking for you regardless.

It was so far away, so removed from the present, that it was little more than a memory, fading with a past that seemed lost in another lifetime.

Sooner or later, she would be threatened by something or someone toughened by years of wilderness living, and she wanted to be ready for that. Nor did she ever want to be considered just a girl or even a woman, somehow reduced in stature by her sex and not regarded with caution.

Endurance demanded sacrifice, but gave back life. Endurance was always the tougher choice, but gave the truer measure of a heart.

Built almost three thousand years earlier, in a time when artificial intelligence was commonplace and thinking machines proliferated, it was advanced for its kind even then, a prototype created in the heat of events that culminated in the Great Wars. Skirmishes had begun already, and its creators suspected where things were heading when they first conceived of it. They were archivists and visionaries, people whose primary interest was in preserving for the future that which might otherwise be lost. Lesser minds dominated the thinking of the times, they manipulated the rules of power and politics to stir within the populate a mix of rage and frustration that eventually would consume them all. To thwart the madness that was overtaking them, the creators determined that those who would destroy what they would not concede should not be allowed to undo the progress of civilization.

The seer and the Elven Prince followed, the former without hesitation, the latter with nothing but.

What sort of magic, he wondered, is kept in a metal shell of spinning disks and blinking lights? It was books they had come to find, but there were no books here–at least, none that he could see. Perhaps they were deeper underground, and the cabinets and their machinery served as protector of some sort.

“You are surrounded by obsequious followers and liars of all sorts. You have separated yourself from the truth for so long that you wouldn’t recognize it if it jumped in front of you…”

“A whistle, but only Rocs can hear it, not humans. Stealth and silence are the rest of it, Little Red.” He grunted. “And luck, of course. That, most of all.”

All that was left was a fatalistic and dogged determination to stay alive for another day, to escape the thing that hunted him, and ultimately to regain enough space to allow something back into his life of who and what he had been.

It was odd that she should have the sight, could see so clearly into the future, and yet be denied so much of its meaning.

A Druid knew better than anyone that life was a myriad of twists and turns that no one could unravel, a path must be traveled to be understood.

Your moods signal a period of change.
Fame and fortune are coming your way.
Sharing little joys offer great hope to others.
More Fortunes >