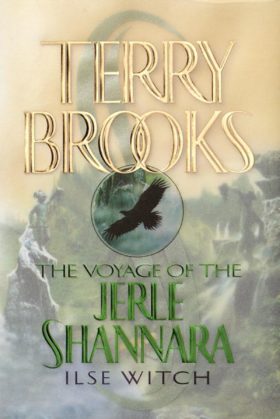 The Voyage of the Jerle Shannara: Ilse Witch

Synopsis: When a half-drowned elf is found floating in the seas of the Blue Divide, an old mystery resurfaces. Thirty years ago, an elven prince led an expedition in search of a legendary magic said to be more powerful than any in the world. Of all those who set out on that ill-fated voyage, not one has ever returned. Until now. The rescued elf carries a map covered with mysterious symbols–and Walker Boh, the last of the Druids, has the skill to decipher them. But someone else understands the map’s significance: the Ilse Witch, a ruthless young woman who wields a magic as potent as his own. She will stop at nothing to possess the map–and the magic it leads to.

Declassified by Agent Palmer: The Voyage of the Jerle Shannara: Ilse Witch is a Great Start to another Brooks’ Trilogy

A life was a small price to pay for an edge on her greatest enemy.

Time and cunning, and the power of the magic she was born to, would yield her a world.

It was bad enough that he must pretend at civility with a man who had done so little to deserve it. But in a world in which alliances were necessary and, in his case, tended to be few and infrequent, he must play at games he would otherwise forgo.

First bring strength to bear, then reason. Power commanded respect, and respect provided a platform from which to enjoin reason. He had neither. He was an outcast, solitary and anachronistic in the eyes of almost everyone. The Druids had been gone from the Four Lands since the time of Allanon. Too long for anyone to remember them as they once were. Too long to command respect. Too long to serve as a catalyst for change in a world in which change most often came slowly, grudgingly, and in tiny increments.

Sometimes, she knew, you became dependent on the things that gave you comfort. She would never be one of those. Dependency on anything was for fools and weaklings.

Quentin’s view was that bad things happened mostly when you thought too much about them.

“You can live your whole life worrying about what you don’t know, or you can accept your limitations and make the best of it. Secrets don’t harm you, Bek. It’s fussing about them that does you in.” – Quentin

Could he manage without a seer’s visions in this endeavor? Allanon had done so, years earlier. But Walker was not chiseled from the same rock as his predecessor and made no claims to being his equal. He did what he could with what he had, mostly because he understood the need for doing so and not because he coveted the role into which he had been cast. Druids had traditionally desired their positions in the order The mold had been broken with him.

Because life’s dictates did not allow for quick and easy distinctions between right and wrong or good and bad. Choices were made between shades of gray, and there was healing and harm to be weighed on both sides of each.

“Listen to me,” Ryer Ord Star intoned softly. “Listen to what I have seen in my dreams. You will make your voyage across the Blue Divide in search of something precious – more to you than to any who go with you. Those who accompany you will be both brave and strong of heart, but only some will return. One will save your life. One will try to take it. One will love you unconditionally. One will hate you with unmatched passion. One will lead you astray. One will bring you back again. I have seen all this in my dreams, and I am meant to see more. I am meant to be your eyes, Walker. We are bound as one. Take me with you. You must.”

Life went on, no matter the magnitude of the events that influenced it.

But Bek Rowe was inclined to wonder if one day soon they would have cause to remember the danger of getting what you wished for.

Men, women and children fell victim to the weaknesses of spirit and morality that plagued mankind. All of the races were susceptible, and all participated in the savagery. There was no end to it, no lessening of it, no sense that it had ever been other than this.

How would it have felt to have power that could destroy entire cities? What sort of havoc would it play with your soul to be able to snuff out thousands of lives at a touch? It made him shiver to imagine it. It made him feel frightened and sick inside.

Even the greatest of whales is helpless in the middle of a desert.
Sharing little joys offer great hope to others.
A difference, to be a difference, must make a difference.
More Fortunes >