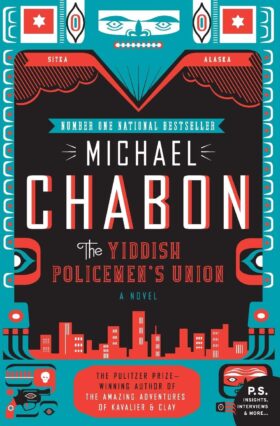 Synopsis: “For sixty years, Jewish refugees and their descendants have prospered in the Federal District of Sitka, a “temporary” safe haven created in the wake of revelations of the Holocaust and the shocking 1948 collapse of the fledgling state of Israel. Proud, grateful, and longing to be American, the Jews of the Sitka District have created their own little world in the Alaskan panhandle, a vibrant, gritty, soulful, and complex frontier city that moves to the music of Yiddish. For sixty years they have been left alone, neglected and half-forgotten in a backwater of history. Now the District is set to revert to Alaskan control, and their dream is coming to an end: once again the tides of history threaten to sweep them up and carry them off into the unknown.

But homicide detective Meyer Landsman of the District Police has enough problems without worrying about the upcoming Reversion. His life is a shambles, his marriage a wreck, his career a disaster. He and his half-Tlingit partner, Berko Shemets, can’t catch a break in any of their outstanding cases. Landsman’s new supervisor is the love of his life—and also his worst nightmare. And in the cheap hotel where he has washed up, someone has just committed a murder—right under Landsman’s nose. Out of habit, obligation, and a mysterious sense that it somehow offers him a shot at redeeming himself, Landsman begins to investigate the killing of his neighbor, a former chess prodigy. But when word comes down from on high that the case is to be dropped immediately, Landsman soon finds himself contending with all the powerful forces of faith, obsession, hopefulness, evil, and salvation that are his heritage—and with the unfinished business of his marriage to Bina Gelbfish, the one person who understands his darkest fears.”

The problem comes in the hours when he isn’t working, when his thoughts start blowing out the open window of his brain like pages from a blotter. Sometimes it takes a heavy paperweight to pin them down.

‘That’s a new one,” Springer says. “Tying off with tefillin.”

“…he plays goalkeeper as a squad of unprofitable regrets mounts a steady attack on his ability to get through a day without feeling anything.”

“I always figured this was the place to plan my misdeeds, if I ever found myself with misdeeds that needed planning.”

You have to look at Jews like Bina Gelbfish, to explain the wide range and persistence of the race. Jews who carry their homes in an old cowhide bag, on the back of a camel, in the bubble of air at the center of their brains. Jews who land on their feet, hit the ground running, ride out the vicissitudes, and make the best of what falls to hand, from Egypt to Babylon, from Minsk Gubernya to the district of Sitka. Methodological, organised, persistent, resourceful, prepared… A mere redrawing of borders, a change in governments, those things can never faze a Jewess with a good supply of hand wipes in her bag.

Every generation loses the messiah it has failed to deserve. Now the pious of the Sitka District have pinpointed the site of their collective unworthiness and gathered in the rain to lay it in the ground.

“His aberration. The freakish streak. The twist in his soul. That is your fault. A son like that is the fruit of his mother’s tree.”

On a Friday night in season, you can buy or sell anything from moose meat to ketamine, and hear some of the most arrant lies ever put to language.

It is solid, well built, new-looking, white concrete and gray-painted beams. It boasts of engineering and the logistical needs of men with money.

“In my experience, Detective Landsman, if I may,” the doctor concludes his own jag, “the people who worry about losing their edge, often they fail to see they already lost the blade a long time ago.”

Like a true hermit, he takes his duties as a host very seriously.

Every Messiah fails, writes Litvak, the moment he tries to redeem himself.

As a foundation for a partnership, mutual pity is not to be despised.

A Messiah who actually arrives is no good to anybody. A hope fulfilled is already half a disappointment.

A difference, to be a difference, must make a difference.
Sharing little joys offer great hope to others.
Even the greatest of whales is helpless in the middle of a desert.
More Fortunes >