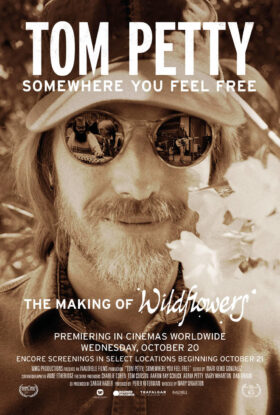 Tagline: The Making of Wildflowers

Synopsis: “In early 2020, a collection of 16mm film from 1993-95 was discovered in the archive of legendary artist Tom Petty. The film was shot while Tom was on a prolific songwriting streak for years making what he intended to be a double album called Wildflowers. Tom Petty was known for being reclusive about his personal life and his creative process. “Somewhere You Feel Free” allows you to spend 90 minutes immersed in the candid and musically rich world of Tom’s creativity as he makes his first album with legendary producer Rick Rubin. With collaborators providing unrivaled access and featuring never before seen footage captured during the making of Wildflowers – Tom’s personal favorite album.”

Tom: In this time in particular, this day in particular, this time of my life, I feel much more comfortable being myself. It’s soul music. I think that’s what I am. I think I’m a soul singer, because you have to connect with your soul in a way. . That’s what’s going on with me artistically, you know? I feel very prolific right now. I feel more like me.

In early 2020, a collection of 16mm film was discovered in the Tom Petty archive. Shot between 1993 and 1995 by Petty’s longtime filmographer Martyn Atkins while Petty was recording the Wildflowers album and on the tour that followed, most of this material has never been seen before.

Tom: This has become a real, kind of pet project for me, this–this solo album, and I’m really enjoying working on it. And I really enjoy being able to take my time with it.

Tom: A way of avoiding politics within the Heartbreakers was to just step out of it and say this is a solo record. Because you don’t want to stay in one little circle all the time. I mean, it’s been almost 20 years of the Heartbreakers. And if I only made records with the same four people all the time, I’d never meet anyone, I’d never learn, I’d never grow. But I really needed to do it, you know, I’d been in a band my whole life, it felt like. And I wanted the freedom. I really wanted to be free of the democratic process. But I think it was time to just turn the corner and try to find another place to go, and the result was “Wildflowers.”

Rick: And that’s another interesting thing about the times. It’s like Tom was able to manage the changes of the styles of music that happened, still sounding like Tom Petty, but being in the moment as well.

Tom: I think Rick, he was really pretty accurate in his evaluation of what I was playing him. But I never really did hire him, he just kept coming back. And we’d have another session, and then we’d stop. And then I’d write some songs and I’d call him, and he’d come over to my house and sit and give me his opinions of the songs and what he thought could be better or worse. It went on, and on, and on, you know, for about a year and a half.

Tom: Songwriting is the most fun I have. When you finish one, there’s no better feeling. I think compared to all the different things we do that are–a lot of them are gratifying, none of them are quite as gratifying as finishing a song. Sometimes it’s really hard to write a song. The best ones–they’re not always, but usually the best ones are the ones that seem to come kinda quick and they just fall out.

Rick: Tom knew that he wanted this to be a solo record. And because it was a solo album, I think he felt even more like it was all on his shoulders. And I think he felt like it was on his shoulders all the time. But for the solo albums, he felt it even more so. It was just more personal in a way. It wasn’t a band offering. It was a Tom Petty offering.

Adria: At the time that “Wildflowers” was being written, he was definitely going to therapy for the first time. And I think that that was an interesting door of perception that was opening. I think that that feeling of confidence and self-examination that he was going through at that time made him want to make a lot of different decisions about his life. And he did them slowly, methodically, carefully, and they were painful for him.

I’m not obligated to bare my soul to nobody, especially in public. You know, it’s a tough thing, but nobody wants to hear you moan about it. And I do appreciate that people are interested enough to want to interview me or to want to know anything about me at all, I am flattered. But it is very hard to sit down and just talk about yourself constantly. I just want to be a musician and play music.

Tom: “Wildflowers” is really not a solo album in the sense that you’d say, “I went off and did it without the band.” Because–especially with Stan gone now, it is the band. All the rest of them were there, which kind of happened piecemeal. Like Mike was going to be there, and then Ben was there. And then, “Who am I going to sing with? I want to sing with Howie.”

Rick: I think for a long time, Tom’s been making records with a lot of guitars on them, but they’re layered guitars. And if you have 6 or 12 guitars playing the same thing, it stops sounding like a guy playing guitar and more just like guitar. What we’re trying to get at now is getting away from the idea of guitar as a bed and more as a prominent instrument played by a person with string sounds and finger sounds and the personality of a guy playing the guitar as opposed to just the sound of a guitar.

Benmont: If you have a song like “Crawling Back To You,” the music has a mood. Music has an absolute mood. And so you dial in. Now, I remember my hands on the piano, seeing my hands on the piano. I remember recording the sounds there at the beginning of it. I don’t really have a recollection of playing the actual take, and that’s a good sign. If you black out, stone cold sober, during a take, then you’re inside the music. And that’s–to me, that’s one of the best things on there. That’s one of my favorite things that we ever did.

The path of life shall lead upwards for you.
Today it’s okay to make a few choices by going with your instincts.
Let’s finish this up now, someone is waiting for you on that.
More Fortunes >