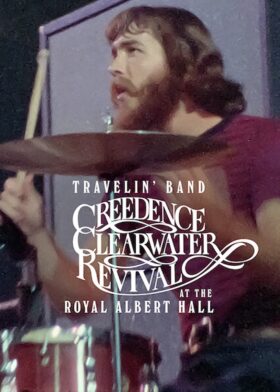 Based On: Based on Creedence Clearwater Revival’s career from their beginnings to their performance at the Royal Albert Hall.

Synopsis: Follow the legendary Creedence Clearwater Revival concert as well as unreleased material from the band.

Declassified by Agent Palmer: Travelin’ Band documentary reminds us how great CCR is

1969 had been a magical year for Creedence. In only 12 months, the band had achieved five top ten singles and three top ten albums on the American charts, outselling The Beatles. They had appeared on the legendary Ed Sullivan Show and played [to] over a million people across America, including the hundreds of thousands gathered at Woodstock.

John, Tom, Stu, and Doug may not have had the familiar ring to it of John, Paul, George, and Ringo, but Creedence were challenging The Beatles for the title of the biggest group in the world.

In April 1970, Creedence arrived at Heathrow Airport to begin their first ever European tour. The tour would include concerts in Berlin, Stockholm, Rotterdam, Paris, and London. The band’s British debut was to take place at the most prestigious music venue in the UK, London’s Royal Albert Hall, which had previously hosted concerts by The Beatles, The Rolling Stones, Led Zeppelin, Cream, and Jimi Hendrix. For Creedence Clearwater Revival, the Royal Albert Hall concert would be a high point of their tour of Europe. The concert was filmed, but never fully released until now. This is also the story of how they got there.

What set Creedence apart from many of their contemporaries, was their ability to produce the sound of their records, on stage and the primal excitement and joy of their concerts, which came from their love of live performance.

As 1969 was drawing to a close, John Fogerty was considered one of America’s most politically significant songwriters.

Creedence’s highly anticipated sold-out concerts at London’s Royal Albert Hall would take on even greater significance when just days before news broke that shook the world.

With the London audience reeling from the news of The Beatles’ breakup, Creedence was now poised to take on the mantle of the biggest group in the world.

Things are turning for the bright side.
Whoever wants to reach a distant goal must take small steps.
Look forward to great fortune and a new lease on life!
More Fortunes >