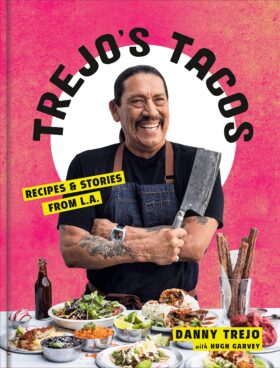 Tagline: Recipes and Stories from L.A.: A Cookbook

Synopsis: Long before he was a Hollywood star, Danny Trejo used to joke with his mom that they should open a restaurant. A few arrests, a couple boxing championships, and more than 300 movies later, Hollywood’s favorite bad guy did just that with Trejo’s Tacos. His unexpected journey from ex-con to actor to Narcotics Anonymous/Alcoholics Anonymous counselor to successful restaurateur is a true rags-to-riches story. Now, in Trejo’s Tacos, Trejo not only shares 75 recipes for cantina favorites like succulent carnitas, vegan cauliflower tacos, and pillowy-sweet cinnamon-sugar lowrider donuts, but offers insights into his life and pays respect to his hometown, his roots, and all of the colorful characters who helped him along the way, creating a delicious tribute to L.A. and the city’s vibrant Latino culture.

How does a man known for playing merciless, shirtless, tattooed, gun-toting, vengeance-thirsty, knife-throwing tough guys become the face of a restaurant group selling award-winning tacos, authentic barbacoa, and kale salad? I say this a lot and Trejo’s Tacos is proof of it: It’s not how you start. It’s how you finish.

When I wasn’t in prison or getting into trouble, there was always home, and I was always welcome. Even more important than home was Mom, who, no matter whether I was being good or bad, would cook the best food. I loved it. Trejo’s Tacos exists because of that love.

That kitchen was always a safe haven, a place where I could stay out of trouble.

I know what people think about celebrity restaurants: a celebrity puts their name on it, and in a year it’s out of business. Not for me. Trejo’s Tacos isn’t a vanity project. It’s a love letter to L.A.

I wish I’d had the book you’re holding in your hands twenty years ago. It would’ve made my life a lot easier. But back then it wouldn’t have been possible. There wasn’t a modern Mexican food revolution happening across the country – there was no such thing as a vegan cauliflower taco! Now there are hundreds of Mexican cookbooks that claim to offer the most authentic, regional, cheffy, easy, technique-drive, healthy, mind-blowing recipes out there. My book is none of those things. It’s a crazy mash-up of the sometimes healthy, Mexican-adjacent, vegan-ish, always delicious food we serve at Trejo’s.

We’re going to give you our recipes just as we prepare them, and yes, some of them have a lot of steps because we believe in putting in the time to build layers of flavor. But you don’t have to cook every single component each time if you don’t feel like it. Look at a recipe and cook it the way it makes sense for you and your life.

Because we’re always layering flavors at the restaurant, we present some rice recipes in this book that are a little more involved than the instructions you see on a box or bag of rice. If you’re pressed for time, go ahead and just substitute plain white or brown rice –even takeout Chinese rice works!

…blot the steak dry with paper towels and lightly salt it again. Removing the surface moisture is key to getting a good crust and making the meat even more flavorful.

People ask me what it was like growing up a Latino in L.A. in the 1950s and ‘60s. I got to tell you something — I never really experienced racism. People that I ran with, my gang, we were all people who had been thrown out of every other gang because of our general insanity–and we were a diverse crew. Frank Russo, an Italian, was one of the guys who saved my life, as far as getting clean and getting sober. Marty Hart was a white guy: Harry Ross was Jewish. We came from different backgrounds and we stood up for each other. No one ever told us we weren’t allowed to go somewhere or be someplace.

L.A. has a long tradition of doing whatever the hell it wants with tacos.

To Blend or Not to Blend

If you don’t have a blender or food processor to make the carne asada marinade, that’s fine. Our marinades are about the flavor, not the smoothness of the puree. Hand-chopping and -mixing ingredients might take a little more time, but a rough-cut marinade will still do the trick. Just be sure to scrape any extra bits of marinade off the meat before grilling so they don’t get burned when you cook it.

That is if you end up making tacos–the chicken tikka is so good, you may just end up eating it on its own!

At Trejo’s our griddles run 500℉, which allows us to char meat in a way few home cooks ever attempt. If you want to pan-sear your chicken or other protein rather than grill it, this is the time to turn on your overhead exhaust fan if you’ve got one and open the windows. Heat a large cast-iron pan or skillet over high heat for 2 minutes. Add 2 tablespoons neutral oil, like saltflower or canola, and heat until it starts to smoke, 3 to 5 minutes. Then add you protein and cook as directed in the recipe you’re using.

Mexican markets and lots of groceries around L.A. sell crunchy prepared tostadas in the tortilla section. (Yes, we have vast tortilla sections at supermarkets in L.A. Yes. I love L.A.) If you can’t find them at yours, just make your own.

“Gringo Taco” is sort of a joke name because a lot of non-Mexicans first started loving tacos thanks to Taco Bell, which for the record did not invent the hard-shell taco filled with spiced ground meat, which is basically what a Gringo Taco is. It’s beefy and mildly spicy and really good. Its origins are a little fuzzy but it most likely was first cooked up in Texas, where beef was plentiful and Mexican immigrants made the most of what they had at hand.

Avocado toast has nothing on these tacos. Because you can’t fry avocado toast! The crunchy exterior and creamy inside of this taco is unexpectedly satisfying. It’s rich and, yes, vegetarian. So they’re good . . . but they’re fried. So they’re bad? The duality! This is another multistep frying project that pays off big-time.

At Trejo’s we make a point to support locally owned businesses so while it might be easy to buy some big-name brand at a supermarket, we suggest you try to find a tocal tortilla chip maker and keep your money in the community.

Sports was kind of about getting out of everything, whatever you were going through, whatever was happening. When you were sitting in the Coliseum screaming for the Rams or just being in Dodger Stadium with all the energy around you, there was nothing else going on. It was a beautiful thing back then, and it’s an even more beautiful thing now that I get to use sports to support my friends, my family, and the teams.

Your moods signal a period of change.
Let’s finish this up now, someone is waiting for you on that.
Courtesy is the password to safety.
More Fortunes >