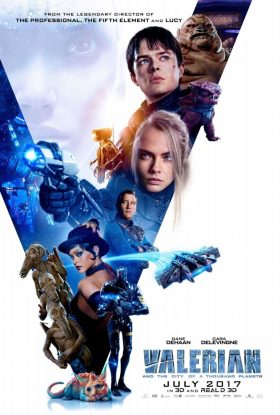 Valerian and the City of a Thousand Planets

Tagline: A universe without boundaries needs heroes without limits.

Based On: Valerian and Laureline by Pierre Christin and Jean-Claude Mézières

Synopsis: A dark force threatens Alpha, a vast metropolis and home to species from a thousand planets. Special operatives Valerian and Laureline must race to identify the marauding menace and safeguard not just Alpha, but the future of the universe.

Declassified by Agent Palmer: No Spoilers: Valerian and the City of a Thousand Planets didn’t “Bomb,” it just isn’t a Movie for “Everyone.”

President of the World State Federation: The Alpha intergalactic space station has reached critical mass in orbit. Its weight and size now poses a serious threat to mother Earth. In its great wisdom, the Central Committee has decided to use all resources necessary to release the space station from Earth’s gravity. Its new course is set with the Magellan Current. Like the great explorer Magellan, the Alpha station will journey into the unknown. The symbol of our values and knowledge, it will carry a message of peace and unity to the furthest reaches of the universe. Our thoughts and prayers go with you. Godspeed, and good luck.

Bubble: Bussing tables! Every artist’s worst nightmare! Never mention this to anybody, okay?

Igon Siruss: I’m fighting for a noble cause, too. Mine.

Jolly the Pimp: Rules are rules and this is a place where we make love, not war.

Doghan-Dagui: You are your own worst enemy, Commander. Unless you make up with your past, you won’t have a future.

A difference, to be a difference, must make a difference.
Even the greatest of whales is helpless in the middle of a desert.
To let another into your heart, first let yourself in.
More Fortunes >