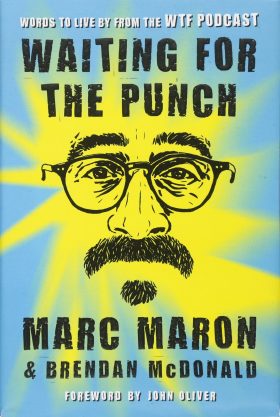 Waiting for the Punch

Tagline: Words to Live by from the WTF Podcast

Synopsis: Each week over a million and a half listeners tune into WTF with Marc Maron to hear Marc and a guest do something remarkable: talk.

Waiting for the Punch is not simply a collection of these interviews, but instead something more wondrous: a running narrative of the world’s most recognizable names working through the problems, doubts, joys, triumphs and failures we all experience. With each chapter covering a different topic: parenting, childhood, relationships, sexuality, success, failures and others, Punch becomes a sort of everyman’s guide to life.

Declassified by Agent Palmer: With “Waiting for the Punch” Marc Maron & Brendan McDonald have Created Something for Everyone

“We have a lot to thank garages for.” – John Oliver

I wanted to hear stories. I wanted to be engaged by people who had interesting lives, thoughts, ideas, and information. I needed it.

I think the pastime of chatting or candidly talking to people about anything or nothing is fading away. People don’t even want to leave voice messages anymore, let alone talk. We keep distance from each other because we can. It’s odd and sad. Because just by talking to each other, we can put all the aspects and challenges and joys and horrors of life into perspective, even if that is not what we are talking about. It’s relieving, comforting, and enjoyable.

I have no idea what is going to happen when I talk to a guest. I’m not sure where the conversation will go. I don’t have a plan other than to talk, to connect. I know I don’t want to be talked at or through. I don’t prepare in the same way other interviewers prepare because I don’t see myself as an interviewer. I am a conversationalist and a somewhat needy one at that.

The effect of listening to an uninterrupted, long-form conversation with emotional ups and downs, depth and lightness, humor and sadness, is an essentially human experience.

“When you feel like you’re okay with where your life is at, it’s good to see the smaller place it came from.” – John Darnielle

I get e-mails all the time from people who are either sober or trying to get sober telling me that hearing people they only knew from TV or music or movies talking to me about addiction made them feel less alone in their fight. I count this as one of the most important reactions to the show. I’m very grateful to provide this help and solace.

I credit the podcast for getting me fully on to myself. Because I was in such trouble when I started it I really needed to talk to people. I needed to hear them. I needed to engage and grow my empathy. I needed to listen. I needed to see myself in others and also hear of struggles that were harder and deeper than mine.

After years of talking to people, I can honestly say that I have learned to accept myself for who I am and accept my issues and problems for what they are. If you learn to shut the fuck up and listen and empathize with others, your emotions start to regulate a bit, your problems become manageable, and your issues become tedious to you and maybe you can let them go for a while, or temper them.

Sometimes you just have to be ok with who you are.

I am pretty crazy, too. I’ve got a lot of rage. Frustration, rage. It’s one of the things I’ve been facing up to, and I’ve always known this as true. So many things about yourself that you someday have to confront are things that you always knew. Then the day comes, and you’re like, “Argh! Damn it! I thought I wouldn’t have to!” – Bob Odenkirk

“I often say if you’re not at least a little bit depressed you’re just not fucking paying attention.” – Todd Hanson

“I don’t think anybody’s special-good or special-bad, and I think we’re sort of all in it together.” – Rob Delaney

“Life is super hard. Once we achieve peace with that knowledge, then happiness can then be possible.” – Rob Delaney

With a failure state of mind you are susceptible to massive resentment, jealousy, bitterness, self-hatred, creative paralysis, anxiety, and dread. Most of these are just fuel for the fire of failure. They were also the engine of my creativity. They were my themes. They drove me. I thought they were all the keys to my success. The bitterness started to erode my ability to create. Bitterness is just amplified self-pity, and self-pity in any form is not entertaining, but I insisted that all people must feel the same way I did.

I used to think people who didn’t fail were somehow shallow sellouts who just knew hot to sell themselves.I still think that is partially true, but what I have learned from talking to people is that those who work really hard and harness their talent, if they have it, can find a way.

It wasn’t until I let go of expectations and let the humility settle in as opposed to anger, self-pity, and the idea of failure that I became grounded in my body and a fucking grown-up.

Marc Maron: Also, in sports sometimes you lose. My biggest regret in life is I was not taught some sort of reasonable sense of competition. For me, losing or being rejected is life threatening. If you like sports or you played sports, even if you weren’t good at it, I think the most important lesson is that losing is not the end.
Stephen Tobolowsky: I think it was, and I believe it was Eugene O’Neill who said, “I hope always to have the courage to push on to greater failures.” I think it is important to understand that failure is not part of the bad stuff. Failure is actually a building block of the good stuff, if you have the courage to keep going. But it can break you.

Despite several years of conversations on the podcast with very talented and successful people, talk of success comes up much less frequently than discussion of failure. I guess it makes sense. People are often driven by their failure, sometimes entirely defined by them. Success is fleeting and elliptical.

These are the stories about making it, in spite of what seemed like a stacked deck. These are personal triumphs amidst professional chaos. These are the things that happen when everything lines up in that once-in-a-lifetime way.

“If you’re not lucky enough to die young, and just get to be a flaming asshole, you will be humbled. Everybody gets humbled, everybody.” – Bob Odenkirk

“My outlook now is to not be afraid of death. This is a stupid thing to say for a mortal–if you can stop your fear of death or at least stop thinking about it for a while, you can give some thoughtful moments to the things that actually mean something to you.” – Bob Saget

Try to shut up and listen, and listen with your heart.
If you don’t know something, admit it. Don’t pretend like you do. Learn.
Don’t exhaust yourself with anger at things you have no control over.
Most of the shit you are reacting to most of the time is stuff that your brain is making up, and you have some control over that.
If someone needs help, try to help, if you can.
Be honest.
Be nice.
Learn and know your limitations and work from there.
Talk to people. It helps everyone involved.
No yelling.
Get your yearly physical.
Try to accept who you are.
Don’t hurt yourself because you don’t like yourself.
Apologize.

“If you want to live a life, you’ve got to realize you are not going to be the writer of your own script. Life is something that happens. You don’t happen to it. It happens to you. You’ve got to allow it, in all of its often-uncontrollable chaos, to come into your life.” – Bruce Springsteen

Your moods signal a period of change.
Look forward to great fortune and a new lease on life!
Today it’s okay to make a few choices by going with your instincts.
More Fortunes >