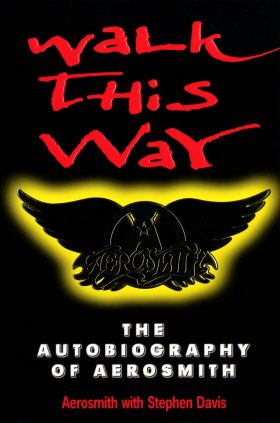 Tagline: The Autobiography of Aerosmith

Synopsis: From their respective origins through to the release of Nine Lives told in their own words and by the people around them including Agents, stage hands, wives, ex-wives, and friends.

Declassified by Agent Palmer: Walk This Way: The Autobiography of Aerosmith is The Definitive Story of The Definitive Rock Band Told In Their Own Words.

Because I’m the lead singer, the focus of attention, the fuckin’ guy who gets paid to be crazy onstage. I’m the guy that has to climb the fuckin’ trees! I’m the guy who’s not afraid to say things and more often than not be sorry for it later, but that’s how I am. I’m a tree climber, living out on a limb because how else are you supposed to pick the fruit? I’m the guy who everybody’s old lady hated to death. And what the fuck did they think would happen to my talent, to my ability to be Steven Tyler, when my life and personality were smoothed out by rehab and therapy? Didn’t they realize I was nothing without my drugs? – Steven Tyler

My mom smoked in the car, we counted phone poles until I went crazy, and it was great to stop for a picnic of bread and hard-boiled eggs near Bellows Falls, Vermont, which was always called Fellows Balls in our family (hence my love for lyrical twists). Steven Tyler

Today you’d say I was hyperactive, but back in the 1950s I was a problem child. People were always yelling at me and my mantra was “Now what’d I do?” – Steven Tyler

To say I worshipped the Stones at this point would be a gross understatement. – Steven Tyler

Immortality. It’s not much to ask for, is it? I wanted to sing on a record so after I died I’d still be singing. That way I could live forever. – Steven Tyler

Steven was a musicians’ musician, with a very keen ear; the Strangeurs were a tight band, mainly because Steven would freak if someone made a mistake. – Peter Agosta

Steven only wore blue. That was his trademark, his thing. I can’t remember him in any other color. Once I asked him why and he said, “Liz, blue is the closest color to truth.” – Liz Derringer

Are You Experienced? No, but I wanted to be. Timothy Leary was saying, “Turn on, tune in, drop out,” so eventually I wanted some pot to see what it was like. It was just something you had to experiment with. I never went for the dropout part. I thought that was for losers. I didn’t think you had to give the finger to everything in life. – Tom Hamilton

Look at this guy. . . I knew a kindred spirit and fellow traveler when I saw one. Something in my deepest being knew instinctively that if I could get into a groove with him and start writing songs, we could combine what I knew with this looseness that they had. – Steven Tyler on Joe Perry playing at The Barn

It started from a single premise: “Rock till I drop.” – Steven Tyler

When we were desperate, we’d go to the Stop & Shop (we called ie the Stop & Steal) supermarket and stuff a couple steaks under our jackets. It was survival. You didn’t call it stealing in those days. “Liberating” was the politically correct term. – Tom Hamilton

The first Aerosmith rehearsals were in the basement over at B.U., and it was like we were students and Steven was the teacher. He taught us order and discipline and we taught him energy and raw power. That’s what drew us together at the start; it forms the basis of the love/hate relationship we share to this day. – Joe Perry

Typical conversation between Steven and Joe:
“Joe, you can’t play that note there.”
“Why not?”
“It isn’t right.”
“But I like the way it sounds.”
“You can’t go there from there. It isn’t right!”
“What the fuck!?!”
Actually, it hasn’t changed that much.
– Tom Hamilton

“Look,” Joe said, “to get this kind of sound, these amps need to be loud. They don’t even really start to sing until you get them up into distortion mode. That’s just the way it is.”
This got to be another of those big problems that’s still not quite reconciled even today. – Tom Hamilton

…and Steven got a winged heart on his left bicep. The lettering under the heart read MA KIN, which was the name of a song Steven was working on. He told me it was gonna be the song that would make them rich and famous. He loved this song and had so much faith it, he tatooed it on his fuckin’ arm. – Gary Cabozzi

Before MTV, there was amazing mystery in rock ‘n’ roll: You had to go see a band to find out what they actually looked like. A lot of that mystery is gone. If you think about it, it was a terrible thing to have lost. – Brad Whitford

I knew immediately they would be successful because they were the voice of the mills and the malls–working-class suburban kids who had grown up on English rock. – Judy Nylon

We believed that anything worth doing was worth overdoing. – Steven Tyler

It turned out Aerosmith was the last act Clive signed to Columbia. – David Krebs

My philosophy was the only thing a hard rock band should play slow was a slow blues. – Joe Perry

The title is a joke on [William Golding’s novel] Lord of the Flies, which came out as a movie around that time. The critics hated us for this. We weren’t supposed to be smart enough to use literary references. – Steven Tyler

Rolling Stone gave Get Your Wings a good review. [“Maintaining an agile balance between Yardbirds- and Who-styled rock and seventies heavy metal, Aerosmith’s second album surges with pent-up fury . . . They think 1966 and play 1974, something which a lot of groups would like to boast.”]

CREEM
“It is Tyler’s ability to project crude, leering sexuality that makes Aerosmith attractive. Coming after a brief era when rock ‘n’ roll fans in their adolescence were bombarded with the exaggerated sexual ambiguity of Alice, Bowie, and Reed, it must be reassuring to have a band that knows everything we’ve wanted to know about sex all along: It’s dirty. (September 1975)”

After a single of “You See Me Crying” [released in November (1975)] didn’t make the charts, David Krebs persuaded Columbia to rerelease “Dream On” as a single in December, two years after it first came out. By early 1976, “Dream On” was #6 in the Billboard singles chart, Aerosmith’s first Top 10 record. It had taken five years. – Brad Whitford

We call them “the wonder years” because we wonder what happened to them. – Steven Tyler

“In 1976 only Kiss and ZZ Top can rival Aerosmith’s claim as the hottest new band in America,” opined Circus magazine. “What sets the five Yankees from Boston apart from the other sensations of ‘76 is the purity of their roots. They are virtually the only natural heirs to the hard rock tradition founded by the Yardbirds and passed down into the seventies through Led Zeppelin.”

“I was in seventh grade and just going through the whole 1978 music thing that was happening for kids–which was like Cheap Trick and the Cars. Anyway, there was this chick that I was going after that was considerably older than me, and she was pretty hot. And I’d been trying to be cool enough to take her out and have my way with her at some point. This went on for months. Finally I sort of weaseled my way into her apartment. So we’re hanging out and she put Rocks by Aerosmith on, and I was mesmerized by it. It was like the be-all-and-end-all, best attitude fuckin’ hard rock record. This was before I had started to play guitar . . . I’d grown up with music, but this was like my record. I must have listened to it about half a dozen times, completely ignored her, and then got on my bike and rode. I was totally in there, I was at least gonna get a decent french kiss out of it, and I completely dropped the ball for Aerosmith, and that was that. It’s probably one of the records that sums up my tasted in hard rock bands to this day. Meanwhile, she’s out there somewhere and I missed it. But it was worth it. That was the record that changed my life.” – Slash, Guns N’ Roses

That fall they played second on the bill to Journey at the Tangerine Bowl in Miami. (The lineup was Bryan Adams opening, Sammy Hagar, Aerosmith, then Journey.) Journey singer Steve Perry visited Steven’s dressing room to get his autograph and have Journey’s tour photographer take their picture together, which left little wonder about who the real rock legend was at this show.

I don’t want fans to think we’re clean, upstanding American boys, but we are Americans, and we do stand up. – -Joe Perry

I’m getting tired of recovery stories. But I could now actually hear us getting sober on the albums. You could chart the whole story from the musical differences when we started, when we started using a little, when we were using, then we we first got sober, then Pump. – Steven Tyler

The New York Times marked a significant milestone: “Mr. Tyler, even more now than the aging Mick Jagger, is the epitome of the hyperactive rock star.” Sexual philosopher Camille Paglia, writing in the Boston Phoenix: “. . . Jagger has failed to keep pace with dance evolution. After Michael Jackson, Madonna, and Prince, he has ceased to convince as a mobile stage presence . . . His true essence lives on in others today, notably Aerosmith’s mercurial Steven Tyler, with his swooping, scarf-trailing dips and his slashing thrusts of his microphone stand.” [August 26, 1994]

There’s more. The two years between Get a Grip and Nine Lives were unlike any that had gone before. Just when you think you’ve got it down, all the rules change. Two more years in the Life. And we weren’t the same people coming out of it that we were going into it. – Joe Perry

We’re going on, and the main thing for Aerosmith is still to let the music do the talking, and that we’re still rocking after all these mad, bad, and dangerous years. Ain’t that a bitch? – Joe Perry

In interviews they get the same questions over and over: how does a band with five disparate personalities stay together for 27 years? “Because we don’t change the formula,” answers Brad Whitford. “We don’t put it in a bottle or a box. Aerosmith happens when the five of us get together and do what we do. We’re still the biggest fans of the kind of music we play, so we just keep going to the show.”

Let’s finish this up now, someone is waiting for you on that.
A difference, to be a difference, must make a difference.
Look forward to great fortune and a new lease on life!
More Fortunes >