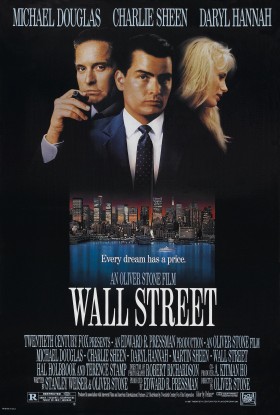 Tagline: Every dream has a price.

Based On: A speech given by Ivan Boesky where he said “Greed is right.’

Synopsis: Enterprising stockbroker Bud Fox (Charlie Sheen) falls under the enticing spell of Gordon Gekko (Michael Douglas), an unabashedly greedy Wall Street arbitrager who tutors him in the unscrupulous tactics that put the corporate raider on top. But when Gekko embroils protege in an insider-trading scheme that may risk the jobs of kith and kin, Fox develops a conscience and decide to turn the tables.

Declassified by Agent Palmer: Wall Street, For Lack of a Better Word, is Brilliant

Gordon Gekko: The richest one percent of this country owns half our country’s wealth, five trillion dollars. One third of that comes from hard work, two thirds comes from inheritance, interest on interest accumulating to widows and idiot sons and what I do, stock and real estate speculation. It’s bullshit. You got ninety percent of the American public out there with little or no net worth. I create nothing. I own. We make the rules, pal. The news, war, peace, famine, upheaval, the price per paper clip. We pick that rabbit out of the hat while everybody sits out there wondering how the hell we did it. Now you’re not naive enough to think we’re living in a democracy, are you buddy? It’s the free market. And you’re a part of it. You’ve got that killer instinct. Stick around pal, I’ve still got a lot to teach you.

Bud Fox: Sun-tzu: If your enemy is superior, evade him. If angry, irritate him. If equally matched, fight, and if not split and reevaluate.

Gordon Gekko: If you need a friend, get a dog.

Gordon Gekko: Wake up, will ya, pal? If you’re not inside, you’re outside, okay? And I’m not talking a $400,000 a year working Wall Street stiff flying first class and being comfortable, I’m talking about liquid. Rich enough to have your own jet. Rich enough not to waste time. Fifty, a hundred million dollars, buddy. A player, or nothing. Now, you had what it took to get into my office; the real question is whether you got what it takes to stay.

Carl Fox: Money’s only something you need in case you don’t die tomorrow…

Gordon Gekko: Ever wonder why fund managers can’t beat the S&P 500? ‘Cause they’re sheep, and sheep get slaughtered.

Gordon Gekko: It’s all about bucks, kid. The rest is conversation.

Lou Mannheim: Man looks in the abyss, there’s nothing staring back at him. At that moment, man finds his character. And that is what keeps him out of the abyss.

Gordon Gekko: It’s not a question of enough, pal. It’s a zero sum game, somebody wins, somebody loses. Money itself isn’t lost or made, it’s simply transferred from one perception to another.

Gordon Gekko: This is the kid, calls me 59 days in a row, wants to be a player. There ought to be a picture of you in the dictionary under persistence kid.

Gordon Gekko: Well, I appreciate the opportunity you’re giving me Mr. Cromwell as the single largest shareholder in Teldar Paper, to speak. Well, ladies and gentlemen we’re not here to indulge in fantasy but in political and economic reality. America, America has become a second-rate power. Its trade deficit and its fiscal deficit are at nightmare proportions. Now, in the days of the free market when our country was a top industrial power, there was accountability to the stockholder. The Carnegies, the Mellons, the men that built this great industrial empire, made sure of it because it was their money at stake. Today, management has no stake in the company! All together, these men sitting up here own less than three percent of the company. And where does Mr. Cromwell put his million-dollar salary? Not in Teldar stock; he owns less than one percent. You own the company. That’s right, you, the stockholder. And you are all being royally screwed over by these, these bureaucrats, with their luncheons, their hunting and fishing trips, their corporate jets and golden parachutes.
Cromwell: This is an outrage! You’re out of line Gekko!
Gordon Gekko: Teldar Paper, Mr. Cromwell, Teldar Paper has 33 different vice presidents each earning over 200 thousand dollars a year. Now, I have spent the last two months analyzing what all these guys do, and I still can’t figure it out. One thing I do know is that our paper company lost 110 million dollars last year, and I’ll bet that half of that was spent in all the paperwork going back and forth between all these vice presidents. The new law of evolution in corporate America seems to be survival of the unfittest. Well, in my book you either do it right or you get eliminated. In the last seven deals that I’ve been involved with, there were 2.5 million stockholders who have made a pretax profit of 12 billion dollars. Thank you. I am not a destroyer of companies. I am a liberator of them! The point is, ladies and gentleman, that greed, for lack of a better word, is good. Greed is right, greed works. Greed clarifies, cuts through, and captures the essence of the evolutionary spirit. Greed, in all of its forms; greed for life, for money, for love, knowledge has marked the upward surge of mankind. And greed, you mark my words, will not only save Teldar Paper, but that other malfunctioning corporation called the USA. Thank you very much.

Carl Fox: Stop going for the easy buck and start producing something with your life. Create, instead of living off the buying and selling of others.

Gordon Gekko: You’re walking around blind without a cane, pal. A fool and his money are lucky enough to get together in the first place.

Lou Mannheim: The main thing about money, Bud, is that it makes you do things you don’t want to do.

Gordon Gekko: I opened the doors for you! Showed you how the system works! The value of information! How to *get it*! Fulham oil! Brant resources! Geodynamics! And this is how you fucking pay me back you COCKROACH? I GAVE you Darien. I GAVE you your manhood. I gave you EVERYTHING! You could’ve been one of the great ones Buddy. I looked at you and saw myself.

Gordon Gekko: Because it’s WRECKABLE, all right? I took another look at it and I changed my mind!

Marv: We’re all just one trade away from humility.

Gordon Gekko: Greed captures the essence of the evolutionary spirit.

Carl Fox: I don’t go to bed with no whore, and I don’t wake up with no whore. That’s how I live with myself. I don’t know how you do it.

Lou Mannheim: You can’t get a little bit pregnant.

Gordon Gekko: Money never sleeps, pal. Just made 800,000 in Hong Kong gold. It’s been wired to you. Play with it. You’ve done good, but you gotta keep doing good. I’ve showed you how the game works. Now School’s out.

Gordon Gekko: Ah, Jesus. I wish you could see this. Light’s coming up. I’ve never seen a painting that captures the beauty of the ocean at a moment like this. I’m gonna make you rich, Bud Fox. Yeah. Rich enough, you can afford a girl like Darien. This is your wake-up call, pal. Go to work.

Gordon Gekko: The most valuable commodity I know of is information.

Gordon Gekko: If you’re not inside, you’re *outside*!

Bud Fox: Life all comes down to a few moment…

Gordon Gekko: It’s not always the most popular person who gets the job done.

Lou Mannheim: Kid, you’re on a roll. Enjoy it while it lasts, ’cause it never does.

Carl Fox: You told the truth and gave the money back. All things considered in this cockamamie world, you’re shooting par…
Bud Fox: Dad, I’m going to jail and you know it.
Carl Fox: Yeah, well, maybe that’s the price, son. It’s gonna be hard on you, that’s for sure. But maybe in some kind of screwed-up way, it’s the best thing that could’ve happened to you. You stop going for the easy buck and produce something with your life. Create instead of living off the buying and selling of others.

Sharing little joys offer great hope to others.
Look forward to great fortune and a new lease on life!
Things are turning for the bright side.
More Fortunes >