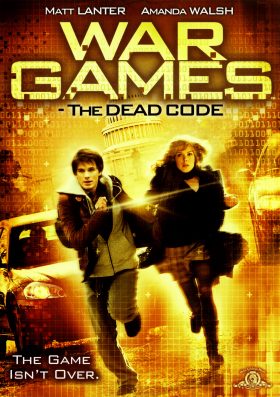 Tagline(s): Are you ready to play?
The game isn’t over.

Synopsis: The United State’s Department of Homeland Security is led to believe an American teen hacker playing a terrorist-attack simulator game online is a real terrorist out to destroy the U.S.

“These are terrorists, people. Eliminated in an automated operation with 98.6% efficiency. 98.6, the temperature of blood. And not a drop of ours was spilled thanks entirely to our girl RIPLEY. RIPLEY defeated this particular terrorist cell through one of her honeypot sites. Attractive, high-stakes games hidden in the darker reaches of the Internet… Once a player penetrates level 5, RIPLEY tags him as a security threat. RIPLEY engaged skilled gamers, exhibiting familiarity with weapon systems and terror tactics.”

“Terror is a filthy sewer, filled with hatred and bile that threatens our shores. If we are to protect ourselves, we have to be able to anticipate threats.

“Are we tempting those who would harm us? Damn right. If they’re innocent, truth will out. In the meantime, RIPLEY will be online 24/7, looking to identify our enemies. And the next 16 year-old who is a year away from strapping on a bomb.”

“Oh, yeah. RIPLEY’ll be so far up this guy’s butt, he won’t know whether to scratch his watch or wind his ass…”

Glass half full question
-no matter unless dying of thirst

“You don’t mess with Ripley she messes with you”

Annie: “You’re an easy read for a smart kid. Maybe you shouldn’t take up chess, ‘cause if I faced you over a board, I’d take you apart before your first move.”
Will: “Bring it on, then.”
Annie: “No, you gotta get yourself together before someone can take you apart.”

Annie: “Okay, so, like, when other kids were out playing baseball, you were in a dark room playing with computers?”
Will: “I played baseball. Third base. All-stars. And I didn’t play with computers, I built them.”
Annie: “Okay, can you spell ‘over-achiever?’”
Will: “Hey, my dad taught me about computers, and he was my third-base coach.”

Will’s Dad, the truth
-why is Ripley interested? It’s not just the game… His neighbor MAssude has a bad brother, his mother spoke out when dad died and works in a chemical corporation…

Why doesn’t Ripley Share
“What I don’t get is why RIPLEY won’t share information with us.”
“She’s a computer. Her primary job is to identify and kill terrorists. Anyone who compromises that objective is expendable.”

Enter JOSHUA
“Wow! It’s old.”
“In his day, he was miles ahead of the curve. They sent us both out to pasture at the same time. I had him quietly shipped out of state, and then here to run a power grid. Amazingly, no one cared.”

Whoever wants to reach a distant goal must take small steps.
Courtesy is the password to safety.
Look forward to great fortune and a new lease on life!
More Fortunes >