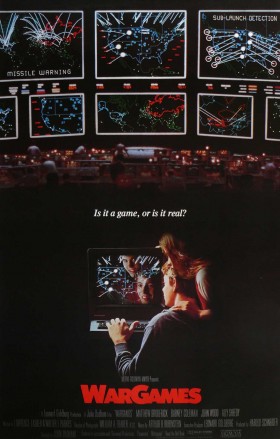 Tagline(s): The only winning move is not to play.
Wouldn’t YOU rather play chess?
Shall we Play!
Is it a game, or is it real?
“Global Thermonuclear War.” You may think it’s one hell of a game. You couldn’t be more right.
To David Lightman, “Global Thermonuclear War” will just be one hell of a game. To everybody else, it will be hell waiting to happen.

Music by: Arthur B. Rubinstein

Synopsis: A young man finds a back door into a military central computer in which reality is confused with game-playing, possibly starting World War III.

Declassified by Agent Palmer: Lessons of WarGames still Ring True, Even with the Dated Technology of the 80s

Stephen Falken: The whole point was to find a way to practice nuclear war without destroying ourselves. To get the computers to learn from mistakes we couldn’t afford to make. Except, I never could get Joshua to learn the most important lesson.

Joshua: A strange game. The only winning move is not to play. How about a nice game of chess?

Stephen Falken: Exactly. There’s no way to win. The game itself is pointless! But back at the war room, they believe you can win a nuclear war. That there can be “acceptable losses.”

Joshua: Shall we play a game?

General Beringer: We’ve had men in those silos since before any of you guys were watching “Howdy Doody”! Now I myself sleep pretty well knowing those boys are down there.

David Lightman: What kind of an asshole lives on an island and he doesn’t even have a boat?

Stephen Falken: Now, children, come on over here. I’m going to tell you a bedtime story. Are you sitting comfortably? Then I’ll begin. Once upon a time, there lived a magnificent race of animals that dominated the world through age after age. They ran, they swam, and they fought and they flew, until suddenly, quite recently, they disappeared. Nature just gave up and started again. We weren’t even apes then. We were just these smart little rodents hiding in the rocks. And when we go, nature will start over. With the bees, probably. Nature knows when to give up, David.

General Beringer: Goddammit, I’d piss on a spark plug if I thought it’d do any good!

Jim Sting: Remember you told me to tell you when you were acting rudely and insensitively? Remember that? You’re doing it right now.

David Lightman: This is unreal! You don’t care about death ’cause you’re already dead! I know a lot about you. I know you weren’t always like this. What was the last thing you cared about?

David Lightman: Hey, I don’t believe that any system is totally secure.

General Beringer: You’re not supposed to be running in here, someone could get hurt.

Stephen Falken: General, you are listening to a machine! Do the world a favor and don’t act like one.

General Beringer: I’ll give it to you in English – somebody broke into Mr. McKittrick’s well-known system and stole the codes that’ll launch our missiles. That right, Mr. McKittrick?

Nothing in the world can take the place of persistence.
Whoever wants to reach a distant goal must take small steps.
A difference, to be a difference, must make a difference.
More Fortunes >