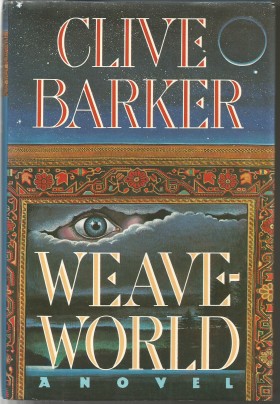 Tagline: What must a lone spy do to survive? The classic spy story that reinvigorated a whole genre!

Synopsis: Clive Barker has made his mark on modern fiction by exposing all that is surreal and magical in the ordinary world — and exploring the profound and overwhelming terror that results. With its volatile mix of the fantastical and the contemporary, the everyday and the otherworldly, Weaveworld is an epic work of dark fantasy and horror — a tour de force from one of today’s most forceful and imaginative artists.

Declassified by Agent Palmer: Clive Barker’s Weaveworld is a Must Read for Fantasy Lovers (No Spoilers)

“…the spirit has its homeland, which is the realm of the meaning of things.” – Saint-Exupéry, The Wisdom of the Sands

“islands in a dust sea.”

“A power like that doesn’t lie,” she said. “It can’t ever die. It sleeps. It waits.” – Imaccolata

Several couples had already retired to the privacy of the bushes, there to do what weddings were made to celebrate.

It still amazed her, this woeful place. Not in its physical particulars, but in its unpredictability. -Immacolata on the Kingdom

… a life of mind places -haunting, soaring- that she’d chosen to forget when she’d took up the cause of adulthood. – Suzanna

That which is imagined need never be lost.

They stood, she sensed, on a threshold; in the realm beyond a little strangeness might be a necessity.

Or was he kidding himself, reading lines from his own story into her face?

“The laws of the Kingdom are the Cuckoo’s laws…” “… The world be haves the way the Cuckoos choose to describe it. Out of courtesy. That’s been proved. Until somebody comes up with a better idea.“ – Lilia

“Everything has its pattern,” Freddy put in. “If you find it, the great can be contained within the small.”

There’d maybe come a time to be proud, to tell his tribe about the terrors and miracles they shared with the world. But this wasn’t it. – On Cal

Sometimes, of course, the war required that he be cruel, but what cause worth fighting for did not require cruelty of its champions once in a while? – Hobart

It would be, he idly thought, a fine time to die.
And a finer time still to live, with so much laid out before him. -Cal

Was the dog owner wandering familiar streets, unable to see beyond the cell of his assumptions?

After all, the business of pursuit and punishment was just a way to spit in the eye of one who had already spat on you. The Law, just another word for revenge.

Lemuel’s smile faded. “I wish what you dreamed were true,” he said. “But the Kingdom’s all too real. It’s just that a thing that grows to certain of itself becomes a kind of lie. That’s what you dreamed. That the other place is a place of lies.”

“Paradise always has to be stranger than you expect, doesn’t it? or it loses its power to enchant. And you are enchanted.” Chloe to Cal

Intentionality, Jerichau had said, was the easiest way to get caught. I never intend to steal…

Maybe letting go was the only true control.

Nobody has ever promised that Heaven would be a light load to carry.

Talk of Power and Might would always attract an audience. Lords never went out of fashion.

What is now proved was once only imagined.

“Holy wars are easier to start than rumors, among your Kind or mine.”

Life and wisdom. What more could anybody ask?

…each adventurer reimagined the stories for themselves. There were as many Wild Woods as there were readers to wander there.

…you know what they say about poets: a little mad, all of them.

Imagination was true power: it worked transformations wealth and influence never could.

There was such sanity in his voice; a politician’s sanity, as he sold his flock the wisdom of the bomb.

Such divisions were for Cuckoos, who believed they lived both inside their heads and out; to whom thought was only life’s shadow, and not its own true self.

That what could be imagined need never be lost.

Let’s finish this up now, someone is waiting for you on that.
Your moods signal a period of change.
Fame and fortune are coming your way.
More Fortunes >