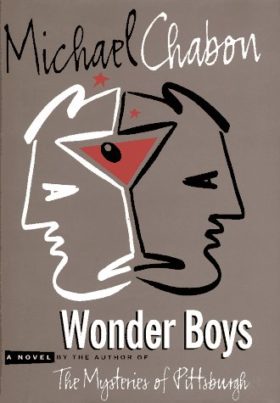 Synopsis: Pittsburgh professor and author Grady Tripp is working on an unwieldy 2,611-page manuscript that is meant to be the follow-up to his successful, award-winning novel The Land Downstairs, which was published seven years earlier. On the eve of a college-sponsored writers’ and publishers’ weekend called WordFest, Tripp’s wife walks out on him, and he learns that his mistress, the chancellor of the college, Sara Gaskell, is pregnant with his child. To top it all off, Tripp finds himself involved in a bizarre crime committed by one of his students, an alienated young writer named James Leer. During a party, Leer shoots and kills the chancellor’s dog and steals her husband’s prized Marilyn Monroe collectible: the jacket worn by the actress on the day of her marriage to Joe DiMaggio.

In any case he was, now that I consider it, the first writer of any sort to cross my path, real or otherwise, in a life that has on the whole been a little too crowded with representatives of that sour and squirrelly race.

Let’s just say that I’d read Kerouac the year before, and had conceived the usual picture of myself as an outlaw-poet-pathfinder, a kind of Zen-masterly John C. Fremont on amphetamines with a marbled dime-store pad of lined paper in the back pocket of my denim pants. I still see myself that way, I suppose, and I’m probably none the better for it.

I’m a man who falls in love so easily, and with such reckless lack of consideration for the consequences of my actions, that form the very first instant of entering into a marriage I become, almost by definition, an adulterer. I’ve run through three marriages now, and each time the dissolution was my own fault, clearly and incontrovertibly.

A sober man at a party is lonely as a journalist, implacable as a coroner, bitter as an angel looking down from heaven. There’s something purely foolish about attending any large gathering of men and women without benefit of some kind of philter or magic dust to blind you and weaken your critical faculties. I don’t mean to make a bid deal out of sobriety, by the way. Of all the modes of human consciousness available to the modern consumer I consider it to be the most overrated.

I’d spend my whole life waiting to awake on an ordinary morning in the town that was destined to be my home, in the arms of the woman I was destined to love, knowing the people and doing the work that would make up the changing but essentially invariable landscape of my particular destiny.

“Every story is the story of somebody’s hard luck,” I said, quoting the silver-haired cowboy writer in whose class we had met twenty years before.

“Hush now,” said Hannah, as she reached up and put her arms around my neck.
“I’m going to regret this tomorrow,” I said.
“That’s nice,” she said. “Everybody ought to have a hobby.”

Writers, unlike most people, tell their best lies when they are alone.

“Rich people are never happy.”
“Aren’t they?”
“No,” said James, gravely. “I mean, people with no money haven’t got much of a shot at happiness in life, either, of course. But rich people, I think, have, like, none.”

She was a natural blonde, with delicate hands and feet, and in her youthful photographs one saw a girl with mocking eyes and a tragic smile, the course of whose life would conspire in time to transpose that pair of adjectives.

I liked the way the Jewish religion seemed, on the whole, to have devoted so much energy and art to finding loopholes in its crazy laws; I liked what this seemed to imply about its attitude toward God, that dictatorial and arbitrary old fuck with his curses and his fiats and his yen for the smell of burnt shoulder meat.

All male friendships are essentially quixotic: they last only so long as each man is willing to polish the shaving-bowl helmet, climb on his donkey, and ride off after the other in pursuit of illusive glory and questionable adventure.

I reflected for a moment on the journalistic euphemism that allowed personal demons to writers who were only fucked up.

It struck me that the chief obstacle to marital contentment was this perpetual gulf between the well-founded, commendable pessimism of women and the sheer dumb animal optimism of men, the latter a force more than any other responsible for the lamentable state of the world.

He has known a number of famous and admired authors in his time, and he likes to caution and amuse his young companions with case histories of the incurable disease that leads all good writers to suffer, inevitably, the quintessential fate of their characters.

Whoever wants to reach a distant goal must take small steps.
Sharing little joys offer great hope to others.
Nothing in the world can take the place of persistence.
More Fortunes >