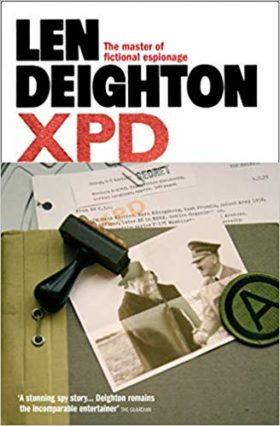 Synopsis: A book about the wartime theft of a top-secret British document propels the intelligence agents of England, America, Germany, and the Soviet Union into a desperate and violent pursuit.

He was given to these abrupt movements and long periods of stillness.

“We have people in the department who will attend to the details, Stuart. We can’t have operations delayed because of a few bottles of milk.”

“Will you be faithful to me while I’m away?” said Stuart, only half in fun.
“I’ll wash my hair every night, and go early to bed with Keats and hot cocoa.”

…the old Polish proverb, “In a house of gold, the hours are lead.”

“I can see why his partner put Jim into semi-retirement,” said Colonel Pitman testily. “You didn’t tell me he was senile. Doesn’t he read the papers? Doesn’t he know that all the world’s governments tell lies all day every day, and show no sign of contrition even when they are caught out in such untruths?”

“Are you trying to tell me that your father-in-law arranged to have you killed? XPD, expedient demise–is that what you are saying?

…he had heard about the generation gap but this was the San Andreas fault!

“Perhaps he doesn’t need to have a job of any kind; he might well have a private income. Rich young trouble-makers. The Western world is full of such people.”

“In any case, sir, I’d like to be assigned to something different.”
“Request refused,” said the DG without hesitation. It was as if he’d prepared himself for this demand.
“Refused, sir?”
“We can’t have field operatives changing their assignments just because they begin to imagine that the department is not handling matters with the sort of deference and decorum that they think necessary. Drink up, Stuart, and have another. Then I must rush. No, we can’t start changing round like that. In next to no time we’d have chaps complaining that they didn’t like the climate in Darwin, or wanted to evade an irate husband in Rio.”

Perhaps that was what they were: not friends or old comrades, simply two strangers who met often.

Masculine embraces might be de rigueur for restauranteurs, footballers and film stars, but not for old comrades.

“… Safe-crackers are extinct, Max. They’ve been replaced by men who carry shotguns and automatic weapons and take a bank by assault.”

“The field agents have to live in that town,” said Stuart. “It’s all very well to sit in London critical of everything the field men do, and impatient to close the dossier, but our man who goes to the travel agent might be storing up trouble for himself, dangerous trouble.”
“This is vitally important, Stuart.”
”It’s all important,” said Stuart angrily. “When was the last time a field agent was briefed to take his time? All the dockets in the traffic room are red ones. Where are the stickers that say ‘Take your time’ or ‘Watch out for your back–this is just something to buy promotion for some London desk man’? Where are they?”

“I’m very busy downstairs, sir, without the added task of compiling explanations for mistakes that we’ve not yet made.”

Rationalization being man’s only natural genius…