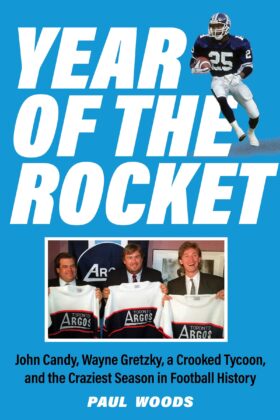 Year of The Rocket

Declassified by Agent Palmer: This ‘Rocket’ Recollection Launched Fond Memories of the Argonauts

The funniest man Canada had ever produced, the greatest hockey player ever to lace up skates, and a slick coin-dealer-turned-sports magnate. As Brian Cooper, whom they hired as executive vice-president of the Argos, described it nearly three decades later: “The king of comedy, the king of hockey, and the guy who owns the Kings it’s a powerful group.”

“If you’re not living on the edge, you’re taking up too much space.”

When speculation he might buy the Argos first surfaced in February 1991, McNall was quoted as saying he had called Montana but “the CFL, with its salary cap, isn’t right for a Gretzky-like acquisition.” A few months after the sale went through, Candy joked publicly about pursuing Montana. The legendary quarterback himself has subsequently indicated that casual discussions about him possibly jumping from the NFL to the Argos did, in fact, take place.

Whatever they felt about how Ismail’s signing affected the competitive balance in the CFL, most in the league enjoyed ESPN’s discomfiture. “I just loved the way the NFL draft was screwed up,” said Edmonton general manager Hugh Campbell. “Very sadly and even respectfully, they had to keep explaining what happened to the Rocket.”
Added Jim Hunt, the veteran columnist for the Toronto Sun: “Watching the NFL and its TV apologists squirm was the next best thing to sex.”

More seriously, he repeated for the Canadian media what he had said in Los Angeles. NFL owners treated a player like “a piece of meat,” but McNall was different. And he felt more “at peace” in Canada. “I got the feeling that when [Canadians] saw me, they looked past the colour of my skin and saw the person…. It was a feeling I hadn’t had before.”
The racial theme was sincere. Ismail’s mother, Fatma, said when her son told her he was going to Canada, “I said, “Honey, get on that freedom train and let’s go.”

Qadry “the Missile” Ismail, a wide receiver like the Rocket, played ten seasons in the National Football League, one more than his brother. Their career NFL statistics are very similar: Raghib caught 363 passes for 5,295 yards and 28 touchdowns; Qadry had 353 receptions for 5,137 yards and 33 TDs. Youngest brother Sulaiman played briefly in the Arena Football League. He was nicknamed “the Bomb.” Fatma Ismail sometimes called herself “the Launching Pad.”

He was the guy pacing nervously on the sideline, sweating over every play. The guy trotting onto the field, against protocol, to tend to an injured player. The guy who swept the floor of the locker room, and was often the last to leave, long after the players had cleared out. The guy who never said “no” to anyone who wanted a moment (or ten) of his time. The guy who, more than any other club owner in a century and a half of Toronto football, genuinely loved the Argonauts.
John Candy was all of the above, and so much more, during the three years in which he held a minority ownership stake in the Argos.

“When John started coming down the tunnel [at a stadium], you would hear this roar as people saw him coming in,” says Pruenster. “The whole stadium would erupt. The Canadian love of John Candy was way more than any kind of rivalry that might be going on in the game.”

In Wayne Gretzky’s eyes, there’s no question about it. Without John Candy, there might be no Canadian Football League today.
“He’s a Canadian icon that people idolized and loved, and he went to every game. He genuinely loved every bit of it. John Candy put his heart and soul not only into a city but into a country.

“He single-handedly, not playing it down, kind of saved the CFL. For a guy who never played a game, he was just as important to the CFL as [star players such as] Russ Jackson and Leon McQuay and Tom Wilkinson. That’s how important John was to the league.”

Hunt, the Toronto Sun columnist who had vowed never to attend another Ismail news conference, now predicted the Rocket’s time in Toronto would be short. “The guy is just too good for the Canadian Football League. So what if he’s only going to be up here a couple of years? It’s going to be a ball while it lasts.”

From the moment Rocket Ismail signed with the Toronto Argonauts, it was no secret what the plan was for him. He was expected to do for Canadian football in Toronto, and, to some extent, all across Canada, what Wayne Gretzky had done for hockey in southern California and indeed much of the U.S. Sun Belt.
Paying top dollar to import a world-beating talent in Gretzky had worked brilliantly for his Los Angeles Kings, so Bruce McNall saw no reason he couldn’t repeat the feat in Toronto with the Argos.

The sun shone brightly for most of the game (the last Grey Cup played in daylight hours), but the Argo sideline was on the shady west side of the stadium. Calgary coach Wally Buono “must have been a good Christian because he sat in the sun all day,” says Rita. “I was in the shade freezing my butt off.”

For nearly three decades it has been a mystery, a bit of Canadian folklore that everyone who saw it remembers vividly. And yet nobody who saw it seems to know the full story. Who threw the beer can at Rocket Ismail?

It was a beer can, spinning its contents out into instantly frozen foam on the rock-hard artificial turf. It had been thrown from the stands. But by whom? Why? And what type of beer?

But none of that could, or ever will, top 1991, when John Candy, Wayne Gretzky, and Bruce McNall ignited the most electrifying year in the history of a team that had been around since Canada was six years old.
A year when the funniest Canadian, the greatest hockey player, and a slick sports magnate with an apparent Midas touch brought Hollywood to Toronto.
When a kid so fast he was nicknamed Rocket became the highest-paid player in history, and rose to the occasion when it mattered most.
When a linebacker with the heart of a quarterback barked out inspirational endured agonizing injections to lead his team to the ultimate victory. raps, and a quarterback with the heart of a linebacker
And so much more…

Fame and fortune are coming your way.
Things are turning for the bright side.
Even the greatest of whales is helpless in the middle of a desert.
More Fortunes >