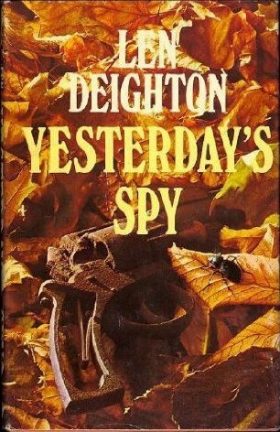 He tapped my report. “Maybe you can shaft the rest of them with your inscrutable sarcasm and innocent questions . . . but me no likee–got it?”

“This is going to be a lousy rotten miserable bummer. I hate these jobs where we are shaking down our own…”

Caterina could cope with things. That was her misfortune in a way. She wanted to be cosseted and looked after but she was ten times more efficient than any of the men who wanted to do it.

“No one can live with a man who is racked with guilt.”

“You don’t have to have something to feel guilt about!” Her voice was high and almost shrill. “Don’t you understand that? Guilt is like pain–it hurts just the same whether it’s real or imagined!”

“He’s changed!” she said. “You must have noticed that yourself. I wouldn’t be surprised what he was mixed up in. He has this sort of schizophrenia and an obsession with secrecy. I don’t know if you get like that in the secret service or whether the secret service chooses that sort of a man. But it’s hell to live with, I’ll tell you that.”

When you read old files, you realize how the paper work itself decides the progress of the inquiry.

Swarms of children made random patterns as they sang, swung, jumped in puddles and punched each other with the same motiveless exuberance that organized becomes war.

It was Dawlish’s genius never to tackle anything he couldn’t handle, and always to have a nearby slave who could.

Tuesday morning was cold and very still, as if the world was waiting for something to happen.

“Ministers never want to know,” said Champion bitterly. “All ministers want is answers to give.” He sighed, “And someone decided that I was the right answer for this one.”

“The days of the entrepreneur are over, Steve,” I told him. “Now it’s the organization man who gets the Christmas bonus and the mileage allowance. People like you are called heros, and don’t mistake it for a compliment. It just means has-beens, who’d rather have a hunch than a computer output. You are yesterday’s spy, Steve.”

Behind him was the skyline of old Nice. The afternoon was dying a slow death, spilling its gory sunlight over the shiny rooftops.

“Trouble is. . . a chap’s got to have a little bread, while he’s figuring out what the better way is.”

“Monsieur Charles Bonnard?” he said.
That was my wartime name: I thought I’d seen the last reel of that one, but now the nightmare came back.

“…Cops have to stick together; bureaucrats arrest only pieces of paper.”

Instinct said, use the gun and get out of here, but training said find out who, what and where.

But such was the monumental ego a job like mine needs that I was already consoling myself fo the distress that killing them would inevitably cause me.

But because they were watching the road ahead, they took in the scene some five seconds before I did–and five seconds in this job is a long weekend elsewhere–ten seconds is forever!

“You’re pitiless, Charlie, do you know that?” It was a pleasant conversational voice she used. “You don’t have flesh and blood, you have clockwork. You don’t live, you tick.” She wiped her nose again. “Tell me, Charlie: do you ever love, or hate, or weep? Tell me!”
“No,” I said. “I just blow a fuse.”

There was a smell of disaster in the air, along with the scent of tile polish and coffee.

“Just tell me your problem,” I said wearily. “You want this in my file? Give me a sheet of paper, I’ll be pleased to oblige you. Anything else you want–crimes you need a confession for? Typewriters missing from the inventory? Petty cash slips without counterfoils? I’ll make it all right in one bumper-size confession.”

That was the sort of man Champion was–he could always convince himself that his cause was right and remember only the evidence he selected.

“When a senior officer, like Champion, confesses to being outwitted–that’s the time to run for your life.”

But in fact the button-through knitted dress clung to her hips and breasts, and revealed enough of her tanned body to interest any man who knew how to undo a button.

“I’ll give you a contract,” I offered. “And if I break the loyalty clause, you can sue me.”

It seemed unlikely that Champion trusted me, for he’d told me countless times that a spy should trust no one.

“You’re a sarcastic bastard, Colonel.”
“Well, I’m too old to change my ways now,” he said.
There was a tiny mark on Schlegel’s face, where I had punched him, in the fracas at Waterloo Station. “That other business . . .” I said.
“My Waterloo,” said Schlegel. He smiled his lopsided smile and explained, “That was Dawlish’s joke.”
“It wasn’t like me,” I said apologetically.
“Funny you say that,” said Schlegel. “Dawlish said it was exactly like you.”

Love has been defined as “a desire to be desired.” Well, I’d been in love enough times to think it unlikely that I was falling in love with Topaz. And yet I knew that curious mixture of passion and pity that is the essence of love. And, in spite of myself, I was jealous of some unknown man who might deprive her of this exasperating composure.

“We said you’d never last,” said Claude. “When you first appeared on the scene, we had bets that you wouldn’t last out.”
“In the war?”
“Of course, in the war. You had us fooled, Charles.”
“That makes two of us.”
“Touche,” he smiled again. “We thought you were too headstrong then, too direct, trop simple.”
“And now?”
“We soon learned that you are anything but direct, my friend. It’s unusual to find a man so ready to let the world think him a clumsy, unschooled peasant, while all the time his mind is processing every possible permutation for every possible situation. Headstrong! How could we have ever thought that?”

“We’re all in whatever we’re in for the money, Claude. I forget the last time I met and unpaid volunteer.”

An atlas might show Marseilles and Nice as two identical dots on the map. But Marseilles is a sprawling Sodom-on-Sea, complete with bidonville and race riots, a city of medieval confusion where the only thing properly organized is crime.
Nice, on the other hand, is prim and neat, its size regulated by the niche of hills into which it nestles. Its cops nod politely to the local madams, and Queen Victoria shakes a stone fist at the sea.

There was nothing perspicacious about that guess.

Through an open window came steam, and I heard Ercole telling someone that a meal was a conversation between diner and chef.

“It’s a long time since I did any swimming,” I said.
“Is that what it was?” said Schlegel. “I thought you were perfecting a horizontal form of drowning.”

I envied him. Not only the ability to swim like a basking shark, but also for his jet-jockey readiness to press buttons, pull triggers and dive into the deep end of life, while people like me drown in indecision, imagined loyalties and fear. If Champion was yesterday’s spy, Schlegel was tomorrow’s. I can’t say I looked forward to it.

I was too late. We were all too late. If you are trying to do a totalitarian job within the permitted limits of a free society, you are always too late.

He sighed as though his life had been filled with brilliant ideas for blackmail that he’d found no chance of using.

“Meanwhile, dig out something on that old bastard Santa Clause. Why do the poor kids get the paper hats, and the rich kids get the ponies?”

“You didn’t discover it,” said Champion. “You sensed it. No plan is proof against a hunch.” He grinned. “You told me there was no place for hunches any more. So perhaps you’re the one who’s ‘yesterday’s spy.’”
“It had crossed my mind,” I admitted.

Only the inevitable is tragic.

Whoever wants to reach a distant goal must take small steps.
A difference, to be a difference, must make a difference.
To let another into your heart, first let yourself in.
More Fortunes >