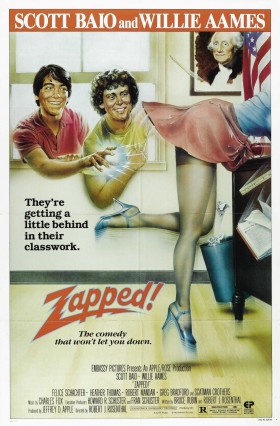 Tagline(s): An A+ comedy that makes the grade!
An A+ comedy you have to get your hands on!
The comedy that won’t let you down!
They’re getting a little behind in their classwork . . .

Synopsis: A high school science nerd gains telekinetic powers after a laboratory accident and uses them for revenge upon bullies.

Declassified by Agent Palmer: Zapped! It’s everything you want in an 80’s Science Fiction Film with extra Boobs

Peyton: Barn, sometimes life is like an onion. When you peel it, it makes you cry.

Dexter: Them women is trouble. First come the woman, then the whiskey… We used to call that the Devil’s double whammy.

Dexter: Mr. Einstein! I’m feeling strange. Someone’s putting some shit on my mind.
Einstein: Sounds like too many chili dogs, Dex. You have to learn to relax!

Principal: Oh,Dexter? Keep this to yourself.
Dexter: Always do. I got a file in my head,two-feet thick,about a whole lot of things that you do,that I keep to myself.

Today it’s okay to make a few choices by going with your instincts.
Things are turning for the bright side.
Fame and fortune are coming your way.
More Fortunes >