One of Magic: the Gathering’s Most Iconic Mascots is Stuffy, the Tortured Doll

One of the most well known mascots in “Old School Magic,” is the Stuffy Doll, created by Richard Thomas. It was on the art for Black Vise, Cursed Rack, The Rack, Leshrac’s Rite, and Wall of Wonder long before it came out as its own card on Oct. 6, 2006 in the Time Spiral set.

Before we get into the Stuffy Doll card itself, let’s take a look at the cards it was featured on back in the day, in the order in which they were printed. This little excursion through Magic: The Gathering’s history will show you just how important this mascot is. 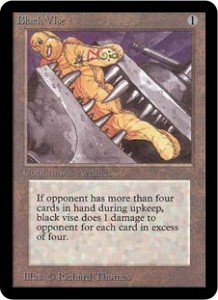 Starting off, the Stuffy Doll was featured in the first Magic: the Gathering set Alpha with Black Vise.

“If opponent has more than four cards in hand during upkeep, black vise does 1 damage to opponent for each card in excess of four,” reads the card in its original incarnation in Alpha. The card was reprinted five more times in Beta, Unlimited, Revised, Fourth Edition, and From the Vault: Relics.

It’s one of the classic staple cards that fit into any deck and was as good a first turn drop as there was. At points in its history, it has found itself on and off of the Restricted and Banned lists for various tournament formats.

It was a boon for Blue many times over, from the days of Ancestral Recall and Braingeyser to Prosperity and beyond.

The artwork, created by Richard Thomas, features Stuffy in a Vise. Although the newest version of the card in From the Vault: Relics doesn’t feature Stuffy, it’s still the first picture people think of if they were around before the new art was released. 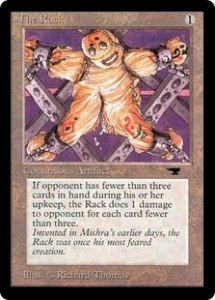 The Rack from Antiquities

The next time players saw Stuffy was twice in Antiquities, with The Rack and Cursed Rack.

The Rack is a discard deck’s best friend.

Like Black Vise, The Rack found has spent plenty of time on the Restricted and Banned lists. It was also reprinted after its Antiquities debut in Revised, Fourth Edition and was “Timeshifted” in the Time Spiral Set.

Again Richard Thomas was the artist who put Stuffy on The Rack which is ripping Stuffy apart at the seams. 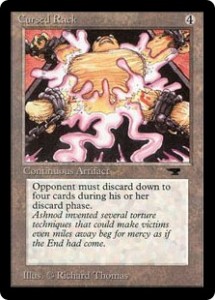 The other Antiquities card featuring Stuffy was Cursed Rack. And although commonly thought of as the antithesis of The Rack, it actually works well with The Rack, especially after the printing of Stronghold‘s Megrim.

Cursed Rack states “Opponent must discard down to four cards during his or her discard phase.” With a standard discard deck, this may hinder The Rack’s ability to damage an opponent, but with a Megrim in play dealing them two damage for each card discarded, they’ll still feel the pain.

When eventually you get them down to having no cards in hand, Cursed Rack moves aside, as it has no effect and The Rack can take over from there.

Richard Thomas again sprawled Stuffy out, this time extremities chained on a black device. Unlike The Rack and Black Vise, Cursed Rack was only reprinted one more time in Fourth Edition. 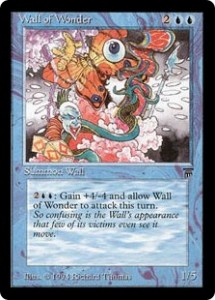 Wall of Wonder from Legends

Following the printing of Antiquities was Legends, and Stuffy wasn’t to be left out in the cold.

Richard Thomas again brought Stuffy into the fold, this time as part of the Wall of Wonder.

Wall of Wonder is a 1/5 Wall that for an activation cost of two colorless and two Blue Mana, which was also it’s casting cost, could become a 5/1 that could attack.

Walls get a bad rap, but Wall of Wonder is fun to play mostly because, even though it can attack, opponents usually see “Wall” and completely forget about it. Also, you can use its ability to buff the Wall of Wonder in defending mode and sacrifice the Wall to kill something with a toughness of up to five.

All in all, Wall of Wonder is useful and I enjoy playing it. It was reprinted twice since it’s original printing in Legends, in Chronicles and again in Seventh Edition. 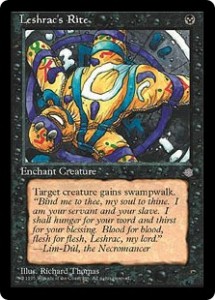 The last time Richard Thomas’ Stuffy was printed in its iconic form was in Ice Age on Leshrac’s Rite.

Leshrac’s Rite was also reprinted in Fifth Edition, Classic Sixth Edition, and Seventh Edition, but Stuffy only appears on the Ice Age artwork. In that artwork Stuffy is is bound and has been painted with purple, aqua and white paint for Leshrac’s Rite.

Because being the featured character on art for staple cards such as Black Vise and The Rack garnered Stuffy some fame, the other cards – Cursed Rack, Wall of Wonder and Leshrac’s Rite – just added to the mystique of Stuffy. Although Richard Thomas did more card art after Ice Age, he never again incorporated Stuffy into any of those works. 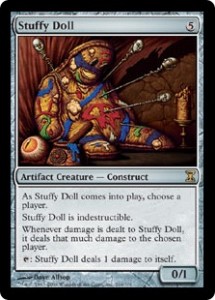 But Stuffy wasn’t done. The doll had one more more hiatus until the printing of Time Spiral when Stuffy got his own card, “Stuffy Doll,” and what an honor it was.

First, the artwork is not done by Richard Thomas but by Dave Allsop, and it is as much in line with any other Stuffy-related card art. If anything, it appears to be Allsop’s ultimate homage to the creator of this mascot.

In fact, look close at the artwork and you’ll see the holes from the Vise, the scars from two Racks, and the remnants of paint from the Rite, as well as the eye from the Wall. Seriously, it’s all there!

But the creators of the card itself had their own homage to this iconic mascot.

The 0/1 Artifact Creature for five colorless Mana has the following abilities:

“As Stuffy Doll comes into play, choose a player.

Whenever damage is dealt to Stuffy Doll, it deals that much damage to the chosen player.

After everything Stuffy has been through, the doll is Indestructible! And to top it off, the errata that added choose a player to Black Vise, The Rack, and Cursed Rack is the first line of the card ability! But the icing on the cake is the damaging opponent part, a hearken back to the two most famous Stuffy cards – Black Vise and The Rack. It really is the perfect storm. 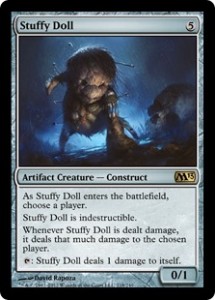 What’s the hook? Why is this important? Well, the creation of the Stuffy Doll card in Time Spiral proves that the creators of the game pay as much attention to the artwork as the players and collectors do. So, you should pay attention to the artwork, too! It also proves that what Richard Thomas created wasn’t just a piece of art used a few times over in various pieces. He created a mascot, and the game followed suit.

It’s a testament to the brilliance of Richard Thomas and to the creators of the game. Stuffy Doll has since been reprinted in M13, with artwork that is more sinister and moves away from Richard Thomas’ original vision more than I would like, but maybe it’s time to move on. Stuffy Doll is already an iconic Magic: the Gathering mascot, and its legacy is to be maintained as long as the cards featuring Stuffy are being cast by players.

Here’s to you Stuffy, the most iconic mascot of Magic: the Gathering! I’d say live long and prosper, but since you’re indestructible, I’ll just say prosper!

A Collection of Stuffy Doll Cards

Even the greatest of whales is helpless in the middle of a desert.
Nothing in the world can take the place of persistence.
The path of life shall lead upwards for you.
More Fortunes >