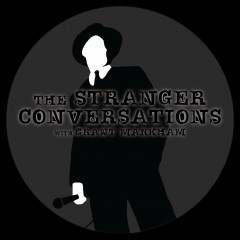 From talking to Jason The Angry Ginger @s7evendaysageek and Grant The Kilted One @insta_grants2 on twitter, I became the 14th guest on Grant’s podcast The Stranger Conversations, even though it’s only episode 13, because he started counting at zero.

Then on to scheduling, which wasn’t bad at all. Grant, the gentleman that he is, told me to pick the Tuesday night in April of my choosing at 8 or 9. So with the excitement of being on my first podcast, mixed with my inner geek’s trepidation at missing a new episode of Agents of SHIELD, I do love that show, I chose April 21st.

So the night came and Grant came up on my Skype and the show was recorded.

[Click below play to listen to the full show.] 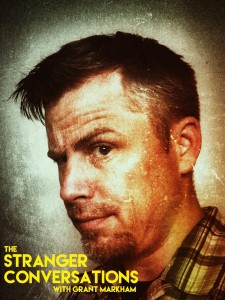 Want to know what it’s like to be on The Stranger Conversations podcast? Grant calls you up, asks you some questions and you talk. That’s it. It’s that simple.

The one thing I will say about being on a podcast for the first time is that I now know what those guys on game shows feel when they can’t think of the obvious answer. A hundred things rushed into my head the moment we stopped recording; things I could have said, things I should have said, but that’s the way it goes sometimes. Something happens to our brains when we know we’re being recorded, it’s something that only practice can remedy.

The next day, after the recording, I decided to look up Grant’s cell phone number to call and thank him, which I did. It surprised him a bit, and we’ve talked a bunch since. So, I can safely report that the next time I appear on The Stranger Conversations with Grant, we will no longer be “strangers,” but that doesn’t mean the conversation won’t be “strange.”

Hopefully by then he’ll have put Batman vs. Vader behind him. I’m sure there’s more I have to say, but I think the next time, I’ll attempt to engage Grant in a little more conversation, as opposed to just talking to him. Looking back, it seems like I spoke to him more, than had a conversation, but having heard every episode of The Stranger Conversations, that’s the way it goes… At least until the next time, that I, Agent Palmer, grace his podcast.

I really didn’t think about what I would get out of being on The Stranger Conversations. In truth, it was my first ever appearance on a podcast. I’m not sure how I came across or how my stories will be received. But it was an opportunity I couldn’t pass up. 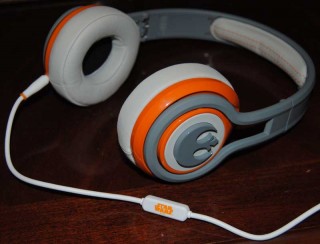 Sitting in my office, with my cup of coffee and a bottle of water, while hooked up to my phone via my Rebel Alliance noise-cancelling headphones, I talked and I talked and I talked. Obviously, I dominated the conversation early on, but the last portion of the podcast, where Grant and I had more discussion than me telling stories, that’s the part I enjoyed the most.

As an original listener to the podcast and having discovered the origins of the idea for this podcast while listening to an old Last Podcaster Standing, in addition to knowing Grant started the podcast to become a better listener, I have to say it was our discussion that was the most fun. Sure, I had a bit of anxiety at telling my stories to the internet, but having my conversation with Grant on the internet seems to make me less anxious.

So, now I’m out there on the internet as a guest on a podcast, which could lead to my getting into podcasting a bit more. But if you’re going to start, if you’re interested in getting out there in audio form, Grant’s the guy to do it with. He made me comfortable and the show’s premise makes it easy to just ease into having a conversation with him. It honestly feels more like a conversation at a diner with a friend of a friend, or a distant relative, than it feels like an interrogation for recording. Interrogations after all, are more my forte.

In fact, after the recording, I put my notes together to interrogate Grant, returning the favor of featuring him on my blog, as he featured me on his podcast.

Was in fun? Absolutely. Would I do it again? I would. Would I suggest it to friends? I already have and I can’t wait to hear them on The Stranger Conversations.

Things are turning for the bright side.
Fame and fortune are coming your way.
You are interested in higher education, whether material or spiritual.
More Fortunes >