A Companion Piece to Agent Palmer on Diamond Minds Podcast 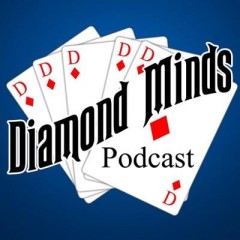 Recently, I had the pleasure of joining the father and son podcasting duo of Paul (Father) and Dave (Son) Maier on their show Diamond Minds. It’s mainly about the two of them catching up and staying in touch, while discussing topics with and without guests coupled with bad jokes and heart warming puns!

Why was I on? Because I was asked! But I wasn’t really asked, it was a suggestion made by Paul on the episode prior to my guest spot on Episode 27 “Secret Agent Man.”

Paul said some very nice things about me after saying he would like me on the show at the end of Episode 26: “New Adventures In A Truck,” so I reached out and we made it happen.

The episode I guested on was full of more than just Paul and Dave Maier, and cousin (or nephew) Chris Maier joined in on the podcasting fun, as well.

We talked about a lot of different things, it was all over the place as far as topics, but never went off the rails and a great time was still had by all. Now, to my stance on higher education.

I’m not against higher education, but I felt someone had to press the issue, so I took a side that I somewhat believe in… I think it made for good podcasting, but that’s for you the listener to decide. So onto my bad jokes!

Every Diamond Minds Podcast starts with groan worthy jokes and I came prepared with four of my own, well, they aren’t actually mine, but these are the ones I used on the show.

The Bad Jokes (Remember, they’re supposed to be bad!)

There was once a young man who, in his youth, professed his desire to become a great writer. When asked to define great, he said, “I want to write stuff that the whole world will read, stuff that people will react to on a truly emotional level, stuff that will make them scream, cry, howl in pain and anger!” He now works for Microsoft writing error messages.

A writer died and was given the option of going to heaven or hell. But first she decided to check each place out.As the writer descended into the fiery pits, she saw row upon row of writers chained to their desks in a steaming sweatshop. As they worked, they were repeatedly whipped with thorny lashes.

A few moments later, as she ascended into heaven, she saw the same rows of writers chained to their desks in a steaming sweatshop. They too were being repeatedly whipped with thorny lashes.

“Wait a minute,” said the writer. “This is just as bad as hell!”

“Oh no, it’s not,” replied an unseen voice. “Here, your work gets published.”

Knock, knock?
Who’s there?
Writer’s.
Writer’s who?
I just don’t know, I seem to have writer’s block!

Why shouldn’t you write with a broken pencil? Because it’s pointless…

So let us know what you think. Tweet @AgentPalmer, @DavidMaier7, @pmaier001, and @ChrisMaierBC, while or after you listen. We are all eagerly awaiting your feedback.

The path of life shall lead upwards for you.
Nothing in the world can take the place of persistence.
To let another into your heart, first let yourself in.
More Fortunes >