What you should listen to: Reasons Are Several Podcast However, what I can tell you is that most of the time it is a combination of at least three of those things which makes it fantastic. It really should be a part of your weekly listening queue.

They describe the show differently depending on where you look. In some places it is described as “a weekly podcast where Scott and Matt riff on sports, movies and everyday shite.” While in other places it’s simply described as “words from on high; sports and otherwise.”

But however they or listeners, such as myself, decide to describe it, it is worth the three episode challenge.

Matt is the host. He introduces most of the topics, paraphrases listener mail and questions, and starts off the show. For more on Matt, check out my recent Interrogation of him.

Scott is the co-host, or so it would appear. He generally reacts to what Matt brings and together they both bring the funny whether intentional or otherwise. But it’s not a “sports podcast…”

Sports of all kinds make regular appearances, but they don’t keep themselves pigeonholed as a “sports podcast.” Luckily for those who don’t seem to care which way the ball bounces, every segment and topic is time-stamped in the show notes, so you can easily get to the parts that are relevant to you.

Sports is a solid theme running throughout each episode, although not all of them. From college to the professional ranks, Matt and Scott talk about football, soccer, golf, basketball and any other sport that has an interesting story-line running either on or off the field.

Every month Matt asks the question “Will Scott Watch it?” These segments are a fun look into the movies coming out in the coming month. This is sometimes, but not always, paired with a look back at how the preceding month’s movies did at the box office.

Also, every so often the boys will discuss lists of the top 5 or top 10 variety. These can be based upon actor or genre, such as our top five Leonardo DiCaprio movies and Top 10 College Movies.

Beyond that you’ll also hear them discuss Matt’s podwhoring, which is Matt’s many appearances on other shows, music, quizzes, odd news stories, and a few other themes that number too many, because they happen at random intervals or annually. Listen Where You Want

If the list of running themes isn’t enough to get you to the conclusion that there is literally something for everyone on Reasons Are Several, then I can’t spell it out for you any clearer. Matt and Scott have great chemistry which is the backbone of the most successful podcasts out there in the ether.

When to enjoy Reasons Are Several?

You can, and probably will, enjoy this podcast where ever you so choose to listen. It may be explicit but it’s not as dirty as some other podcasts with that tag. For the most part, you should be safe listening at work or in public without headphones, although the odd news articles they sometimes discuss might require headphones. So listen without headphones at your own risk.

There are two important extras of note. Once way back in Episode 76, Matt and Scott took us on a thirty plus year adventure through hip hop and then more recently they spent a whole episode (#96) on Star Wars: The Force Awakens… These are anomalies as far as their episodes go, but it’s not too much and they could do it more often…

They also put out a “Bonus Ep: At the Movies — Saw” this past fall with them creating their own commentary track for the film. With plenty of talk about doing this again, I wouldn’t put it out of the realm of possibility. 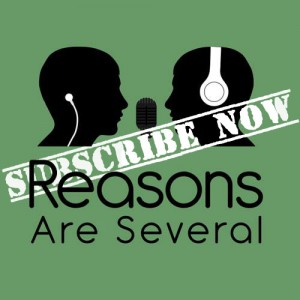 This show should be put into your rotation, even if not heavy rotation. I enjoy because of their chemistry, which is really one of the hallmarks of a great podcast. You may find other reasons. But whatever they’re talking about, they either stick to topics they know, or fake it really well, also another hallmark of great podcasts.

You can hear them on almost every podcast platform there is and interact with them on Twitter @ReasonsAre or on Facebook at facebook.com/reasonsareseveral or email the show at reasonsareseveral@gmail.com. And you can always listen to their wonderful clips on Clammr at www.clammr.com/app/reasonsare. They are always looking for more listener feedback, and (inside joke here) apparently, I don’t count! Go figure…

Neither Matt nor Scott knew that this was going to be written, so please, let them know how well I sold their show!

More reasons to listen to Reasons Are Several.

Sharing little joys offer great hope to others.
To let another into your heart, first let yourself in.
Whoever wants to reach a distant goal must take small steps.
More Fortunes >