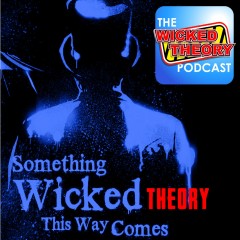 Yes, it was absolute shock! I was completely not ready for it. Bill and the gang got me and they got me good. I would like to assume that a good time was had by all, but you’ll have to ask Bill, Bob and Ed for their thoughts.

Meanwhile, the podcast was what I expected it to be an absolute treat… And they brought pizza from Denino’s, not random junk brand name pizza, but great New York pizza straight from the source!

Now, unfortunately it wasn’t the entire Wicked Theory crew (Dom couldn’t make it), but at the same time, there is still a coffee mug waiting for me in their studio, so arrangements still have to be made for that event. But for a moment, let’s go into why this happened and why the other thing hasn’t happened yet.

First, this was a perfect storm. Bill knew that I was literally doing nothing for the weekend. In truth it was my first weekend off, no podcasting to do, no big projects to work on, seriously, for me it was a bit of an oddity. Now, my first thought upon knowing this was… Quiet weekend just bumming around, literally, it’s been go-go-go for me for quite a while. You can’t blog and proxycast and produce and help behind the scenes with as many pods as I do, without busy weekends. So, no offense to the guys, this being my first weekend without any of that in months, I wasn’t planning on going anywhere, especially since it didn’t really reveal itself to be a free weekend until a few days beforehand.. 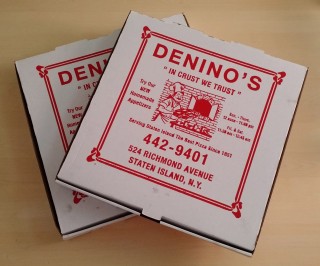 That said, Bill knew I would be around and not busy. Then, with Dom still awol, and no guest for the week, Bill had me standing by as a possible Skype guest. Yeah, I know, I wasn’t going to question the rule of travel if he wasn’t going to bring it up. Then as you’ll hear in more description on the show, the idea of them coming to me was bandied about, championed by Ed O’Ebert.

And so it happened… The start of the periscope that revealed this surprise was that Bob’s car broke down and they were waiting for Ed… That was the cover story Bill told me… And I believed it until I saw my front door!

Anyway, that’s the story, or at least what I’ll tell you now. The rest, you’ll have to listen to Episode 54 of The Wicked Theory Podcast or the 24th episode of my proxycast.

Before I go into my thoughts on this visit, and yes Bill and the boys got me good and I’m not sure I’ll be able to top it, I have to mention one thing that happens to me often, and something that definitely shouldn’t happen when the podcast comes to you.

The thing you should know about appearing on a podcast you listen to on a regular basis is that sometimes even recording with them you just naturally fall back to your default which is listening to them. So despite the fact that Bill, Bob, and Ed had brought and set up the podcast “in my dining room” I had to remind myself that I was not listening to the podcast… I was actually on the podcast.

That may sound like a cop out, but I assure you it is not. It’s probably something that regular listeners turned guests of a show have happen often. It’s not shyness, it’s just that you’re hearing voices that you normally listen to, as opposed to interacting with. So that is a true thing!

But back to the surprise. I’m eternally thankful for it. It was shock and awe, it really was, anyone who’s seen the video knows that. 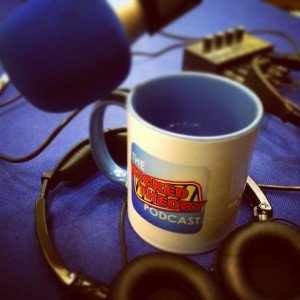 All things equal, as fantastic as it was to meet them in person for the first time and to podcast with them, we didn’t get that much time to just hang out. A lament shared with Grant Markham from last year’s Podtoberfest when Bill showed up they, they prepared, they recorded and then he left, *sad face* – no quality time. We should have. And that’s on me for next time when I’m in their neck of the woods.

Yes, I’ll be making it out to them soon enough, but with schedules as they are, it may take a bit of time but it will happen before October. And now on to the sappy part. Bill, has fast become a very good friend, and the fact that Bob and Ed came along as well was both a treat and an honor.

Now they did announce the surprise on Periscope and Bob did another Periscope during the break with a third and final video after the recording, but we didn’t really tweet, or take pictures like we probably should have. And this is sort of ironic coming from the marketer I am, we didn’t take the pictures or the periscopes or tweet heavily like I would have suggested had I been producing this but those things can fall by the wayside when you are in fact “in the moment.” We weren’t on our phones, we were just there. It was a bit surreal, I must admit, but it did happen and even if you don’t believe it or didn’t see any of the Periscopes, now lost to time, it happened for us. You’ll just have to listen to the podcast and take our word for it.

I know some of it was in fun, but in truth, there’s no chance that this happens if I’m just a random listener. I do help as “the intern” behind the scenes at Wicked Theory, and Bill helps with some of my projects as well, but the community of podcasters that I am privileged to be a part of at Shumway Industries and Diamond Corps, (as well as the many free agent pods that are unaffiliated) are all genuinely comprised of great people behind the mics.

To the arguments that have been made on the definition of friendship, and dare I say “family,” based on just an internet connection, I say you’ve all got it utterly wrong unless you agree with me that friendship can exist despite the distance. And I’m talking true friends, not the fair weather types. 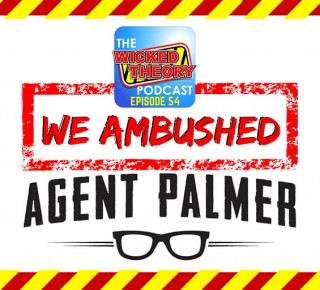 Listen to the Episode

It’s something I hope I never take for granted, because it shouldn’t be. This has become or I should say it is more of a family than a gathering of friends, but all of that aside (enough of the sap already!), I’ll have to get back at Bill and the boys at some point…

I’ll have to start scheming and planning and plotting…

Back to the surprise… I’m not nearly the introvert that Mr. Markham thinks I am, but his two emphatic tweets from the 7 Days A Geek Twitter account (@7dagpodcast) about this surprise visit seem worth sharing again:

There’s really not much more to say other than listen to The Wicked Theory Podcast Episode 54 or my proxycast Ep 24, since they are one and the same, and enjoy! Though I don’t think you’ll have as much fun as we did recording, you certainly can make a valiant attempt at it!