Need for Speed: The Run feels like a “Grown Up” Cruis’n USA 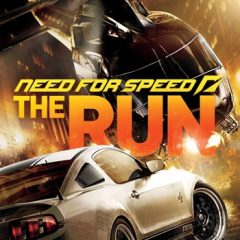 Racing “The Run” a 3000-mile event from San Francisco to New York, Jack Rourke needs to finish first. He is in debt to the mob and needs to get out.

It is that simple in story mode.

The Run is broken into 10 stages because even for a game, having you drive all 3000 miles from coast to coast would be a bit excessive. The stages are;

Now, this is a Need for Speed game, so the cops do give you some trouble during your race, but beyond that, Jack’s mob ties means that there is another enemy to get in your way, The Mob, itself. This manifests itself through being shot at, by cars and even helicopters, and beyond that gives you another hindrance while you’re racing for the finish line beyond the cops.

But deep down, this is a “grown up” version of Cruis’n USA. It’s hard to see it any other way. Back in the day, especially on N64, I loved Cruis’n. I still really enjoy going back to the series, but The Run is that grown up; not a modern version or a serious version, but a grown up version. 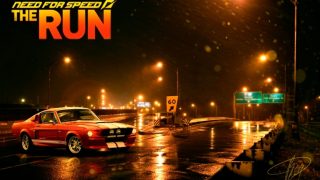 It’s not a more modern version of Cruis’n because both utilized the top technology of their time, so it’s unfair to compare something of today to something of yesterday. And it’s not a more serious version, because as fun as Cruis’n was, The Run is also fun. You can’t really get caught up in the drama of the the loose plot too much, when mobsters have easy access to a helicopter.

But it is a fun game. And the soundtrack is probably the most perfect part of the game. I get that normally there are usually industrial tunes in these type of games, but the variety of tunes as you drive across the country is extremely well selected:

Heartbroken, In Disrepair by Dan Auerbach
Don’t Owe You A Thang by Gary Clark Jr.
Treat Me Like Your Mother by The Dead Weather
C’mon Lets Go by Girlschool
N.W.O. by Ministry
On The Road Again by Canned Heat
Bullet Proof Cupid by Girls Against Boys
Beat The Devil’s Tattoo by Black Rebel Motorcycle Club
Big Red Rocket of Love by Reverend Horton Heat
Lonely Boy by The Black Keys
Get Some by Lykke Li
La Calle by Ritmo Machine

There are a lot of good songs on there, but when “On The Road Again” by Canned Heat came on as I was driving somewhere in the midwest, it was wonderful and literally something I would probably have on my own road trip list, which might be why I enjoyed it so much. 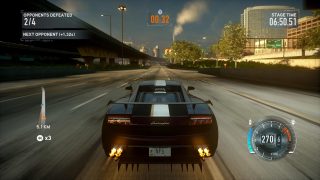 The other thing about this game is that you are traveling from West to East, which I’ll admit with my own “east coast bias” was the opposite of what I was expecting. That being said, the realism of environment that was put into this game, not just in the driving and the road conditions, but the blinding sun coming up in the east when you’re driving straight into it in the morning, is as glaringly annoying as it is in real life.

I know I’m about 6 years behind in putting the key in the ignition for this game, but I’m always behind when it comes to gaming. All of that being said, I have to say the only drawback to the game is how much time you spend in the loading screens. You’d have to think at some point these games would focus a little harder on the programming to keep those screens to a minimum.

But it wasn’t enough of a detraction from the game for me not to recommend it as a good weekend play. And I’ve only scratched the surface on the “Challenge Series” I unlocked as I drove across the country, so the replayability(at least in the challenges) makes it seem like there’s a lot more content there. 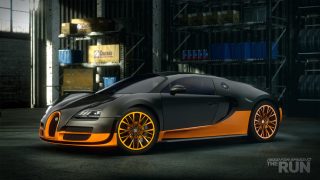 Now, you can’t talk about any part of the Need for Speed franchise without mentioning the garage of cars, and this game has quite a few to choose from. From the Aston Martin V12 Vantage and Audi Quattros, to the BMWs, Chevy Camaros, El Caminos, Corvettes, the Dodge Challengers and Chargers, the Ford Focuses, GTs, and Mustangs, to the Lamborghini Aventadors, Countaches, Diablos, Gallardos, and Murcielagos, to the Lotus, Lexus, Maserati, Mazda, McLaren, Mercedes-Benz, Mitsubishi, Nissan, Pagani, Pontiac, Porsche, Toyota, Volkswagen, and more.

There’s always a car you can’t afford waiting to be taken out for a spin during The Run or in the challenges.

But the final word here is enjoyable. Even on Normal mode, it doesn’t take long to get the hang of driving the cars. This is the most modern of the Need for Speed series that I have played. Prior to this, I’ve only ever played on my GameCube, so moving forward and actually utilizing my PS3 as more than a Netflix box was great.

Of all the games to have picked up, I’m glad I finally joined the race and picked up The Run.

Look forward to great fortune and a new lease on life!
Things are turning for the bright side.
Good clothes open many doors. Go Shopping.
More Fortunes >