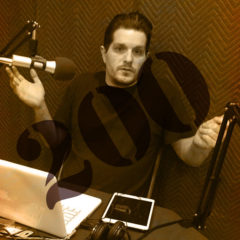 This past week The Wicked Theory Podcast celebrated its 200th Episode with the Roast of William Sweeney, Esq. And after a night of laughs and looking back, Bill dropped a bomb about changes coming to the show.

And while I am on the inside, I don’t want to speculate about the future of the show, I want to take this opportunity to say some very nice things about The Wicked Theory Podcast, but more specifically it’s host with the most, Bill Sweeney.

While Bill gets his fair share, or perhaps more than his fair share of the blame, I’m not so sure he gets enough of the credit and praise he deserves. That’s right, I said credit and praise. “How many blog posts are you going to milk out of this” was part of Bill’s roast of me, and while he spoke of other things, he knew the answer before he asked the question, even in jest.

Now, he probably expected the detailed timeline of my journey to Staten Island, and the three days and two nights I spent on that small piece of real estate with him, as well as, Stef, brother Bob, Ed, Uncle Jay, and John Zombie John Thompson, but that’s not what this is. This is a look back at all of Bill’s podcast accomplishments because there were many.

First, and foremost, he actually started the podcast. Now, Bill won’t want you to go back and listen to the first ten or so episodes, but Bill is a process guy who loves to remind me that sometimes talking about doing something is just as fulfilling to the brain as actually doing the thing, so it’s no small step for Bill to move from talking about to doing. Especially when you consider it took him over six months to actually get to the recording of the show, from the internal monologuing, which must have been going on for quite some time. 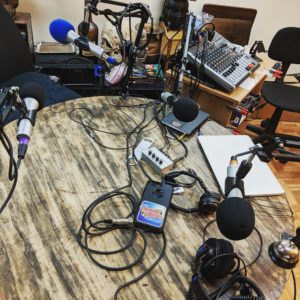 The Wicked Theory Podcast Setup for 200

Second, you have to look at the on-air talent Bill surrounded himself with, and while some have come and gone, they have all left their mark. It all started with Bill, Bob, and Dom, though Bob wasn’t actually introduced during the pilot episode. It’s ok because Bob wrote the theme song. Dom was there from the beginning, but faded like a shooting star and hasn’t been heard on the show since he randomly stopped many moons ago.

Ed went from avid listener and active emailer to “regular guest” as I’m pretty sure Bill never officially gave him a “co-host” title, though he is the only show regular to have a successful spinoff with The DC TV Report.

Ed overlapped with Dom, and then Ed overlapped with Uncle Jay who came in and whipped the show up into a cigar and booze-filled frenzy. Don’t worry, most of the extravagance is an act for Uncle Jay, who since he joined the show has launched a successful acting career by padding up the IMDB with geek shows like Daredevil, The Punisher, and Gotham.

Meanwhile, I stepped in behind the scenes to be ignored most of the time, but I managed the chat room, where a community was forming with regular listeners such as Wes, Brian, Bryan, James, Benny, Dan, and Zombie, who were always down for some chat room shenanigans.

It’s not the easiest thing to start a podcast, but what is even harder is to remain consistent. Those regular listeners have been treated to one of the longer stretches of consistent podcast content in the independent podcast community. In fact, the two weeks the show took off earlier this year, were some of the first breaks the show had ever taken. 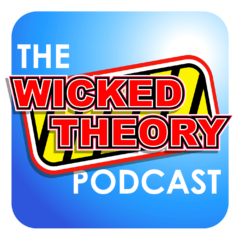 Even back when Bill and I were driving back from Michigan and the second Podtoberfest we had arranged for a filler episode to be released while we were on the road. My point is that Bill deserves the time he’s got coming to him. As a producer, friend, and fan of the podcast, I’ve seen what Bill put into the show and he didn’t skimp. While he sometimes makes light of his output and even his effort, it’s always 100% of what he has to give.

Remember, this isn’t Bill’s only gig. He has a day job, he has art projects, writing pieces, and scripts that he dabbles in from time to time. So Bill, enjoy the time away. It was well earned and well deserved.