On April 1st, LEGO released five sets commemorating the 20th anniversary of the LEGO Star Wars theme, each set came with a new version of an old set, as well as a limited edition minifigure presented in their original guise.

Today’s review is for the cheapest set in the line, priced at $19.99 (£19.99), and comes with five minifigures and the little dropship, 125 pieces in total. The original Imperial Dropship set came out in 2008 and was built from just 81 pieces.

There’s not a huge amount to say about this, the set comes with two bags of elements (not numbered) and was put together within 20 minutes. There are just four stickers in the set and these are used for the Imperial logos and cockpit instrument panel.

It’s a good little build, the dropship obviously takes its design cues from the set it homages, but also improves on the 2008 set by taking advantage of more recent parts. The platform release feature works well, although there’s only space for three Stormtroopers in the platform, compared to four on the original. It’s a solid little ship though and includes extra storage for the troopers’ weapons. 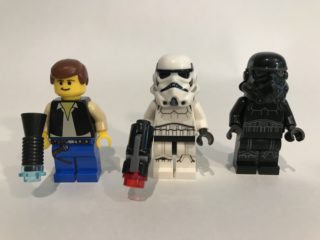 The minifigures themselves are a bone of contention, the LEGO Stormtrooper has been redesigned over the years, and this set comes with the new versions, which not everyone likes. I dig them though. The Shadow Trooper pilot has also been redesigned.

Omitted from the set however are the classic weapons for the troopers, replaced instead with stud shooters. This mirrors the recent trend with LEGO’s Battle Packs and adds playability, but purists may not approve.

The original set retailed for $10 back in the day, even with adjustment for inflation, you’re pretty much paying an extra $8 bucks (ish) for the Han Solo minifigure and stand.

That said, this is the first time LEGO has redesigned a battle pack and to get a key figure like Han, in the cheapest set of the line is a good move by LEGO. The set is fun, looks cool and while $20 seems a bit steep, it’s kinda par for the course with LEGO Star Wars sets and if you like the look of it, you should pick it up. 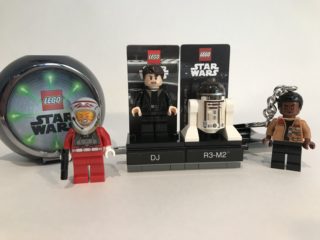 If you spend over a certain amount on Lego.com, you qualified for a bonus gift box featuring five gifts (from a selection of about 15 or so), and competition entry to win either Platinum R2-D2, A sterling silver R2-D2 or a signed and graded TC-14.

I got lucky with my box as only of the polybags was already in my collection. I received the Darth Vader Pod, DJ and R3-M2 minifigures and stands, a Rebel A-Wing Pilot and a Finn keyring. Your mileage may vary.

Aside from DJ, who I already had and wasn’t exactly thrilled the first time, the rest of the gifts are very cool. The Darth Vader Pod with his little Tantive IV corridor vignette is awesome, and everybody loves Astromech droids.