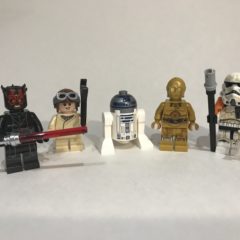 If you’re wondering why the diversion from the 20th Anniversary sets? Well, I don’t have the two of the sets yet, and the Slave 1, as beautiful as it, can’t stand up without additional support. I’ve ordered a custom stand so worry not. It’ll be here soon.

Microfighters divide opinion amongst fans of Lego Star Wars as their super-deformed style doesn’t appeal to everyone. On the whole, though, I’m a fan, and the kids love them. At less than ten bucks, Microfighters are relatively cheap and in recent years, have been an inexpensive way to get some decent mini-figures.

Microfighter series seven was released earlier this year and consists of three sets; Naboo Starfighter, Sith Infiltrator (aka Darth Maul’s Scimitar) and the Escape Pod vs. Dewback double pack. Should they be in your collection? Let’s take a look, and for some reason, score them. 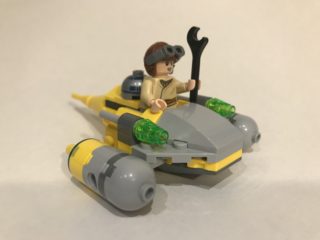 Let’s start with what I’d consider the weakest of the three sets. It’s not that it’s bad, it’s just not that good either, and if it hadn’t been marked down, I probably wouldn’t have picked it up. Yes it’s immediately recognisable as the N1 starfighter, but it’s also oddly proportioned (even by Microfighter standards), and while the build quality is mostly solid, each engine is only connected by a single technic pin, so are easily knocked out of position.

The Anakin minifigure is fine, understandably doesn’t come with a weapon and is instead given a spanner to wield. The set also comes with R2-D2’s head to sit behind the pilot. The flick-fire missiles add playability but aren’t easily removed which is a little annoying. 5/10 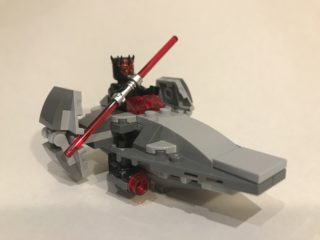 With its long sloping nose, the Sith Infiltrator Microfighter is more true to the in-universe design than any of the recent larger sets. It also captures the curve of the wings better, although these don’t fold, which is an understandable sacrifice. The distinct narrow silhouette between the bow and cockpit has been lost completely by the addition of twin stud-shooters. These are easily removed which makes the ship look ten times better.

Intergalactic badass Darth Maul is the same figure we’ve seen a few times now, albeit without his cape. If I were to complain about one thing, it’s that although Maul comes with his trademark double-bladed lightsabre, it can barely be held while he’s piloting his ship, and there’s no clips to store it. 8/10 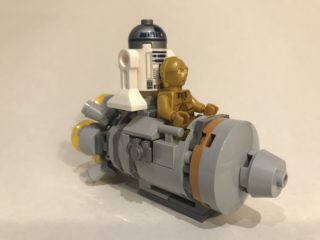 The cool thing about the twin packs is that you get two sets of instructions so you can split the set between two people can build a Microfighter each. With the Escape Pod Vs Dewback set, you can re-enact the scene of R2-D2 and C3P0 traipsing through the Tatooine desert, while a miserable Stormtrooper fails to find the droids he’s looking for.

The escape pod build is highly detailed, especially around the engines, but at the same time is frustrating as while C3P0 can sit comfortably in the pod, poor R2 is relegated to sitting on top, attached by one stud on a lowly jumper plate. In this instance, some detail could be dropped to make increase playability. Both are the standard figures we’ve seen a thousand times. 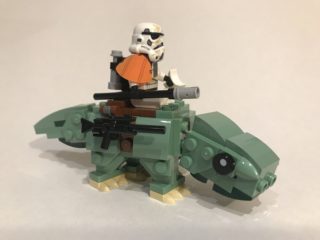 The Dewback however, is awesome. It makes use of some Mixel joints to give the head and take limited articulation, and the build style is perfect. Brown elements are used perfectly to simulate the saddle, and there are connection points either side for Stormtrooper’s weapons and accessories. I’m just gonna say it. The Dewback is adorable.

The Stormtrooper himself has the appropriately dirty armour that we’ve seen in other sets located on Tatooine, as well as a nice little brick-built backpack. Were the Dewback released on its own? It would get the top score, but this is a twin pack and the escape pod itself is weak. 7/10

Nothing in the world can take the place of persistence.
Your moods signal a period of change.
Whoever wants to reach a distant goal must take small steps.
More Fortunes >