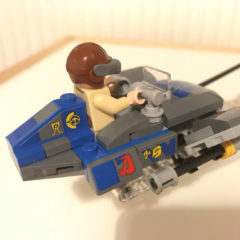 Anakin’s Podracer is a set I wasn’t overly hyped about as I never had the original, but I am a completionist and unsurprisingly the set is already available at a marked-down price if you shop around. Officially it’s an homage to the 1999 set (7371) which also came with Anakin and Padme. The design, however, borrows heavily from the 2011 Anakin Vs Sebulba set and a lot of the designs are the same. 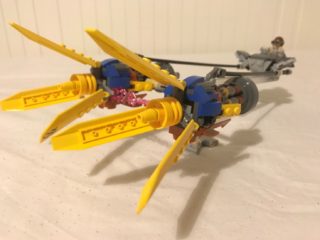 Anakin’s Podracer is built from three bags. The first contains the cockpit, stand and anniversary version of Luke Skywalker. The cockpit itself is compact and doesn’t use any unusual building techniques, but aside from the eight (!) stickers, is fun to build.

The second and third bags contain an engine each, and the latter bag has the set’s other two minifigures. The engines are quite involved given the relatively small number of parts, but I didn’t really enjoy the build. Some of the assembly designed to give texture was a bit fiddly. There are a further three stickers on each engine. 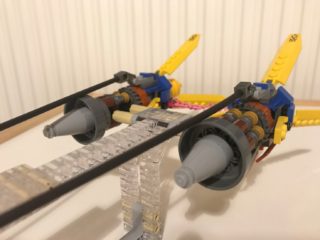 I knew there was a reason for holding off on this one, and that reason was justified. I don’t really know who this set is aimed at. I’m reminded of the AT-RT is as much as it looks good, but it doesn’t look enough like the source material to be a quality display piece. The display/flight stand is great for kids (with tiny hands) but detracts from those looking for something that will grace a shelf. The engines are over-textured and feel more could have been better done with fewer elements.

The many stickers add to screen accuracy, but most are small and tricky to place. The 1×3 slope at the back of the cockpit has three stickers on it alone. Anakin and Padme also graced the original set, albeit they’re more accurate now as neither has adult sized legs anymore! Both figures look good, as does the Luke Skywalker figure. I wish it came also came with Anakin’s pit droid like the original set.

If you can pick it for $20 or less then sure. When built the set is 14” long so does take up a surprising amount of shelf space and despite adjustable vanes, has little play-value. If you only have $20 and need to choose, I’d take the Imperial Dropship instead.

Today it’s okay to make a few choices by going with your instincts.
Courtesy is the password to safety.
Fame and fortune are coming your way.
More Fortunes >