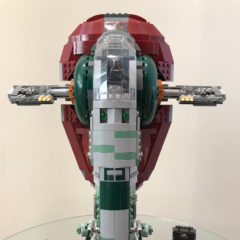 Boba Fett’s Slave 1 is one of the most iconic ships in the Star Wars galaxy and has had a number of Lego versions, which is impressive considering how little screen time it got. In-universe, the modified Firespray 31 Class patrol and attack craft previously belonged to Jango Fett, before Boba inherited it. Originally blue and white, the ship was repainted by everybody’s favourite space pirate Hondo Ohnaka.

This Lego interpretation of the Slave 1 kinda supports itself on some surfaces but it’s sketchy at best, so I ordered a stand from Wicked Brick, which we’ll also look at throughout the review. 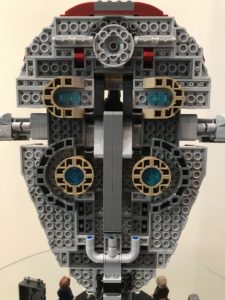 This is the set that sealed the deal on the Anniversary sets and the thought of building it was genuinely exciting (I’m a massive nerd). Building the set doesn’t disappoint, there are a lot of interesting building techniques, and the set uses new (for 2019 anyway) elements. There are 1007 pieces in total.

The techniques used to make the different sections of the ship angle away from each-other borrow from the larger Ultimate Collectors Series, but the result is a super sturdy, super swoosh-able ship. Often as you’re building a section, it’s not always obvious what it’s for, or how it fits into the finished model, but I like this mystery.

Firstly the Minifigures. All good, although we’ve seen them all before with the exception of Zuckuss, who’s making his first appearance in Lego. You also get Boba, Han, and the Protocol Droid 4-LOM. Leia is good, but you know the deal by now with the anniversary figures.

It’s a superb set but there are a couple of minor niggles that keep it from being perfect. This isn’t to say you should have any hesitation about buying it, just that there are a couple of small things that annoy me. The set has two spring-loaded shooters which are very well concealed and remotely activated by triggers on the back of the ship, which is awesome. 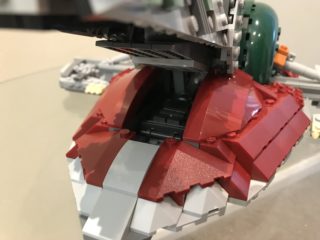 Aside from this and the two blasters (which aren’t connected), the ship has no other weapons. The Slave 1 should be armed to the teeth, and we’ve seen other weapons built into other Lego versions.

My other niggle is the cockpit area, the seat (and wings) rotate when you rotate the ship to its landing position. But this doesn’t always happen. There’s also an open space behind Boba and you can see straight through the ship. This feels like a sacrifice that was made so a collapsible handle could be built into the back of the vehicle, which is a nice feature, but still a slight annoyance. There’s a lifting hatch by the boarding ramp, under which you can store the Han-in-Carbonite element. 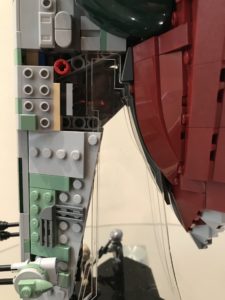 Sure the Slave 1 can sit on its base, and if you’re displaying it in a loading scene then that’s fine, but that’s not what the ship is meant for. It’s a beautiful design and deserves to be displayed in its vertical flight mode. The Wicked Brick stand is available in a selection of variants, from just the stand through to information plaques and even an entire case. I went for the stand and Minifigure add-on.

I’ve bought a fair few stands from these folks and they’re always solid (this isn’t paid-promotion, although my door is always open guys!). The stand slots into the spaces behind the panels and displays the set beautifully. Some people don’t like mixing Lego with stands that aren’t Lego-built, and I get that, but I feel this (and lots of the others) enhance the set, so are worth getting. The stand is made from Perspex and you have to remove the backing paper yourself, which can be a bit fiddly.

The path of life shall lead upwards for you.
Nothing in the world can take the place of persistence.
A difference, to be a difference, must make a difference.
More Fortunes >