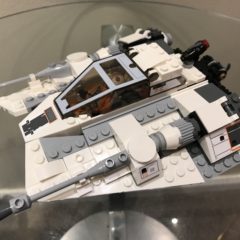 Here it is, the last of the five sets released in April, and it the set I was least looking forward to. Why? Speeders are cool, but it’s only been a year since Lego released the Sandspeeder set, and aside from the colours used, the two vehicles look almost identical not only to each other but the thousand other Snowspeeders we’ve had over the years. By this stage though I had four of the five sets and the anniversary Minifigures just didn’t look complete without Lando. 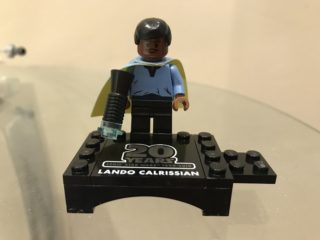 If you’ve built a speeder before, you already know the deal. However there are differences between the Snowspeeder and Sandspeeder (don’t worry, the comparisons will stop soon) and I prefer the techniques used on the newer model. That said, some of the sections are near identical cockpit area and wings. The first bag contains the turret, Rebel Trooper, and Lando. Bag two has the cockpit and Luke. Bag 3 is the left wing, while bag 4 is the right wing, blaster, tow cable and Dak Ralter.

It’s a good set, although you’ll have deja vu if you’ve built previous speeders. The turret is a good size and is posable. The speeder holds together well and is very swooshable. The pilot suffers from having to lean back to fit in the cockpit, but this is nothing new. The cockpit opens in two places, but you’ll only ever really open the whole thing as the front canopy is prone to falling off.

The set is sticker-heavy but this is forgivable given the end product. The wings have movable flaps which reveal more sticker detail. The turret has a stud-shooter and the speeder has two spring-loaded shooters, but the speeder conceals these well under the wings, and these can easily be removed if you want. The shooter on the turret can be replaced with one the spare 1×1 wedge pieces to complete the look. 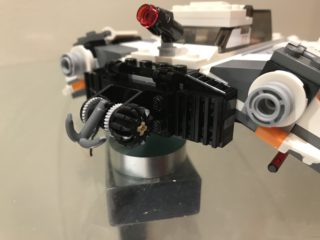 The grappling hook and string is the same as we’ve seen forever, however, there is a spare hollow, round stud in the set and you can use this to launch the hook from the rear stud-shooter. This is much more fun than it ought to be.

The Minifigures are good, although Luke and Dak have the same bodies, so only the heads and helmets are different. Luke has a pistol and lightsaber, the blade of which can’t be stored anyway sensible, which is annoying. The hilt and pistols can be stored behind the gunner in the little storage space.

The Rebel Trooper is cool, but I’d have preferred an Imperial Snowtrooper and turret instead, as that would give you a full playset. Much like how the AT-RT came with Clones and Battledroids.

Erm… yes. But only if you don’t already have a flotilla of speeders, because aside from Lando, it’s just more of the same. If you have any of the other Hoth based sets or a walker, then you can create a fun little diorama.

Today it’s okay to make a few choices by going with your instincts.
Whoever wants to reach a distant goal must take small steps.
Even a broken clock is right two times a day.
More Fortunes >