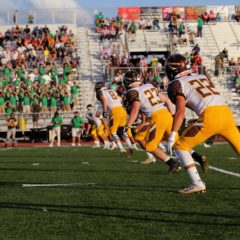 Before the 2019 College Football Season kicks off, I’m joined by Matt (formerly of the Reasons Are Several Podcast) to preview the season with Conference Winners, Playoff Matchups and a National Champion!

Our only qualifications are that we enjoy watching, talking, and speculating about the College game!

And before you head off into our picks, you can hear Matt and I wax poetic on the Reasons Are Several Podcast about our picks for the 2016 Season, but we also tackle our Top College Football Rivalries.

Matt: Most will pencil in a third straight conference championship game featuring two-time defending champ UCF vs. high-scoring Memphis. However, the hiring of Dana Holgerson makes Houston a contender. The Cougars might start the season 1-2, but they will ride the electricity of D’Eriq King to light up the conference.

Palmer: Not going out on a limb with this pick; the AAC Champion will come from the Sunshine state. The question is whether it will be Central or South and I believe it will be the Knights of UCF, getting into the conversation for a Big Six Bowl.

Matt: How could you pick anyone else? Miami is stout defensively but young on offense, while Syracuse has been a bit of a bogey team for the defending national champions but they lost their all-world QB. Clemson is loaded and if they get through week 3 without a blemish, they should roll to another undefeated season.

Palmer: Clemson is still the favorite, however, there could be a spoiler brewing in an unexpected place, don’t look to the Bulldogs, look to the Volunteers. But that’s just to spoil the perfect season, I still expect the Tigers to roll.

Matt: That twat, Urban Meyer, is gone but he leaves a fairly stocked roster in the capable hands of Ryan Day. This is probably the year that people predict Harbaugh and Michigan to get over the hump – especially given they host ‘The Game’ but their schedule is fairly brutal with a couple tough road tilts. Nebraska is a bit overrated, Penn State is reloading and Michigan State can barely get a first down, let alone score. Wisconsin and Iowa might surprise, but each could easily lose 3-4 games. I can’t decide if Ohio State is gonna be 9-3 or 11-1. The margin for error will be smaller this year but the Buckeyes always seem to get it done and they probably do again.

Palmer: And I am one of those people, Matt! Michigan finally gets it done. A new coordinator from Bama brings in some fresh blood to a program that has been underperforming the last few seasons. A good QB and solid offensive line mean it’s time for the Wolverines to actually outscore opponents, instead of doing it all on defense. Plus, Mr. Khaki needs a good result. And the sleeper in this league is Penn State. So, hedging my bets be mentioning them here. 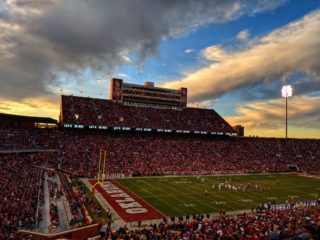 Matt: Heisman winner, Heisman winner, national championship-winner – yep, it’s another reload at the quarterback position for Oklahoma. Given all the talent around Jalen Hurts and his ability to win big games, Oklahoma is a shoo-in for the conference championship game and the big favorite to win it. The Texas hype train is rolling loud this year but they will lose at least three games (probably four with the conference championship). Nobody else will really challenge as this is a two-team conference.

Palmer: With two College Football playoff semi-final losses, Oklahoma has reloaded at QB once again with Bama transfer Jalen Hurts, which will help them navigate through the Big12. Will it be enough to get to the promised land after being so close for two consecutive years? That remains to be seen.

Matt: I appreciate that Butch Davis v. Lane Kiffin is a battle of the FUs but I think the winner of this conference comes down to November 9 when North Texas visits Louisiana Tech. Slight edge to Mason Fine and company.

Palmer: Yet again, I’m predicting the winner of a conference to come from Florida with a choice between two Sunshine State teams. This time it’s between two teams with high profile coaches, Butch Davis and Florida International University and Lane Kiffin’s Florida Atlantic. This year, it’ll be Davis’ high-powered FIU offense that makes the difference.

Matt: Toledo, Western Michigan, and Northern Illinois will all have a say in who wins the MAC, but my money is on the Bobcats. Coming off an impressive bowl win over San Diego State, Ohio is primed for a big season. The schedule is very manageable and Nathan O’Rourke should put up big numbers to go along with a defense that got better as the 2018 season wore on.

Palmer: For Ohio, the cliche of reloading not rebuilding is true of an offense that was prolific last year. There may be no more school records this year, but it’ll be enough to them from the pack and emerge on top of the MAC led by senior Nathan Rourke.

Matt: The easy pick – every year – is Boise State. However, losing their defensive coordinator and facing a tricky schedule will take its toll. Many predict that Utah State and San Diego State will be the main obstacles for the Broncos. However, it’s the defending conference champion Fresno State Bulldogs who should be the favorite to win the title again in 2019. Jorge Reyna takes the keys to Jeff Tedford’s offense but the pressure will be eased by what should be another solid defense.

Palmer: Besides starting the season in Jacksonville against Florida State, the Boise State Broncos avoid a regular season contest against Fresno State, which is who I expect them to meet and beat in the Mountain West Championship game. 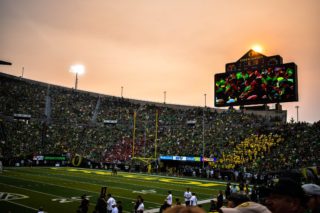 Matt: I never, ever pick my team to win anything – whether that is out of superstition or anxiety. The smart pick is probably Washington/Utah in the conference championship, especially since the Utes avoid Oregon on their schedule and the Huskies host the Ducks mid-season. The schedule isn’t optimal for Oregon either with tough road games at Stanford, USC, Arizona State and the aforementioned trip to Seattle. This is going to be another one of those years where the conference eats itself and the division winners have multiple losses so bye-bye playoffs!

Palmer: Honestly, I think the Pac-12 comes down to Oregon, Washington, and Washington State. This is the North’s year and I’m going to give it to Chris Petersen’s Washington Huskies. Wazzu is going to lose to Stanford or one of the lesser of the North’s teams and Oregon is yet again going to find a way to beat itself, leaving the Huskies to beat up on the winner from the South.

Matt: I know, I know, what a boring pick. With all the talent in the SEC, it won’t be easy and Alabama might lose a regular-season game but they will win the conference championship. Texas A&M’s schedule is a nightmare. LSU and Florida will make noise and Auburn should be a tough out but this will come down to Bama v. UGA once again. The Dawgs will do just enough to sneak into the final four, however.

Palmer: Georgia, Florida, LSU, and Texas A&M will all provide themselves with Collateral Damage, in a way that if one of them manages to upset Alabama, the Tide will still have a better conference record going into the Conference Championship. So it’s Alabama again, but the rest they’re coming back to the pack a bit.

Matt: I’ll be honest, I know fuck all about this conference. I know a guy who lives in Jonesboro so I really want to pick Arkansas State but I’ll ride with App State who has won or finished second in the conference the past four seasons. I mean, remember that huge upset of Michigan in 2007? That’s all I got…

Palmer: Ever since they moved into what I still call Division 1, Appalachian State has been winning. I see no reason why this won’t continue this year with a new coach and the league’s top QB in Zac Thomas who, most importantly, is protected by the best offensive line in the Conference.

Good clothes open many doors. Go Shopping.
Let’s finish this up now, someone is waiting for you on that.
Things are turning for the bright side.
More Fortunes >