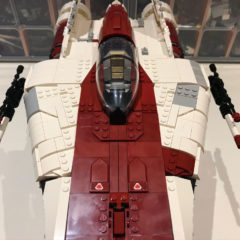 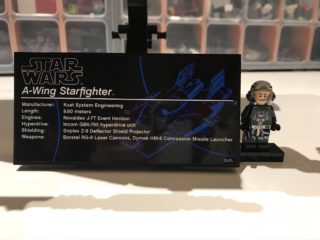 The first thing you notice is the quality of the instructions (see the end of the video), these feel like a higher quality paper stock, and the black backgrounds really make the colours pop on the pages. It tales 270 pages and 570 steps to put this beast together, there’s also some information about the vehicle and interviews with the designers in the booklet.

This set is recommended for ages 18+, and I’m not really sure why. There’s nothing here a 15-year-old couldn’t manage. You can watch my speed build in the video below to see how the A-Wing was put together:

The build starts with a Lego Technic box, around which everything else is added on, it feels surprisingly hollow at first. As soon as you start to build the nose of the fighter, you realize there are some special building techniques here that must have taken a lot of trial and error! I’ve never built the Saturn V set, but it looks complex. This set has a few ‘how did they figure that out?’ moments which are pretty rewarding. 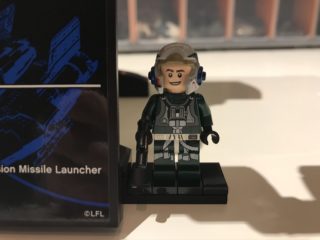 Although most of the fighter is super sturdy, the engine sections are only held in quite loosely, and I’m not worried they’ll fall off on the shelf, I do think Lego could have done a slightly better job.

There’s only one Minifigure with this set, but to be fair it’s a single-seater ship. The pilot isn’t officially named in the set, but the Q&A identifies the fighter as being modeled on the same ship that (37-YEAR-OLD SPOILER) crashes into the bridge of Darth Vader’s Super Star Destroyer, in turn destroying it, somehow. Since this is that same fighter, the figure is therefor Arvel Crynyd aka Green Leader. 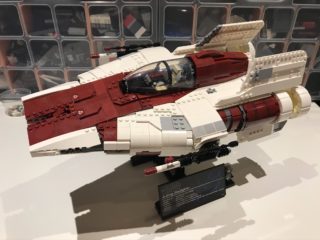 This is a thing of beauty, and there are some superb techniques employed to get the iconic angles and lines that make up the fighter’s design. The stand shows off the set well and is adjustable. I have some minor gripes, the cockpit stickers are annoying, and there are some QC issues with the red elements, i.e. they’re not all exactly the same shade. The biggest bone of contention is the price. This is an expensive set for what it is. While I loved building it (twice now) and it looks stunning on the shelf, it feels like it should be $20-$30 cheaper. It’s the same price as the Tantive IV set which is also huge, has more pieces, and comes with a selection of Minifigures and Droids.

If you want to experience building a UCS set, then get it. It’s a good way to spend five hours. If you’re not in love with it though, spend your money on other sets. There’s a lot of cool stuff coming out soon from Lego Star Wars.