IndyCar could learn something from NASCAR a.k.a Don’t finish the race under yellow! 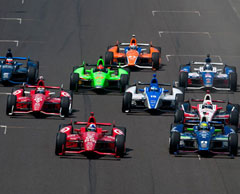 Yesterday, The Greatest Spectacle in Racing, the Indianapolis 500 ended under caution. I repeat, it ended under a yellow flag! Thus race winner Tony Kanaan followed the pace car for the final two laps to take the checkered flag. This is legal as it follows the current IndyCar rules, it’s just not good for the sport. Hello, is any one there? This is racing isn’t it?

Such a finish can’t happen in NASCAR. They have a Green-White-Checkered finish, like overtime, and they have three tries to get it right. If a caution comes out before the white flag, they do it again, up to three times. That’s at least three attempts to let the race be decided on the track and I like that rule. 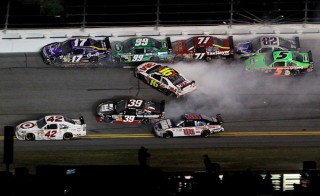 A crash in NASCAR during a restart

Three tries? Why not four or until they get it right? Because this is the real world and I’m sure after the fourth time they’d need to pit. Cars run on fuel, which is painstakingly measured out to get them to the end with the least amount of stops, which would detract from the race on the track and put it squarely in the pits. Also, after about the fifth time, there may not be many functioning cars left for an exciting finish, remember they only try again if the caution comes out. Why do cautions come out? Because people crash.

This isn’t the way IndyCar functions at the moment. I completely understand that these are open wheel racing vehicles and crashing for them is much more dangerous than in NASCAR, but your premier event ended two laps too early and although there is a little consolation in the fact that fan favorite Tony Kanaan won the race after a career long Indy 500 drought still, even he was a bit conflicted about the way he won the race. 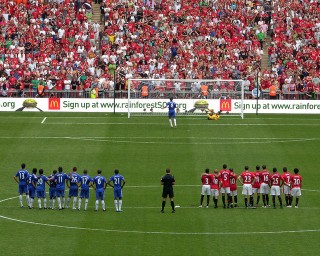 Overtime rules aren’t usually this complicated. The only other controversial finish is soccer or football to the rest of the world.

In tournament settings, where there must be a winner, they use an additional two 15 minute periods plus extra time and then if it’s still tied, they go to the penalty shootout. The quote that I hear most often about this is “it’s not the greatest way to end a match, but no one’s come up with anything better.” This is a great case study.

In the case of IndyCar, they should incorporate the NASCAR rules, maybe only doing two tries instead of three, because it may not be the best way to end a race, but nobody has come up with anything better!

Good clothes open many doors. Go Shopping.
Let’s finish this up now, someone is waiting for you on that.
Sharing little joys offer great hope to others.
More Fortunes >