What you should listen to: SModCast the Flagship of S.I.R 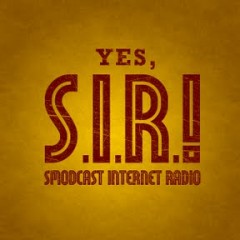 SModCast is, as I said in the title, the Flagship of SModCo Internet Radio (S.I.R.) is a must listen. It’s not just for fans of Kevin Smith movies, it’s for all geeks. SModCast usually consists of Kevin Smith and Scott Mosier, although others join in from time to time.

At its core are two geeky friends talking about ridiculous news, hypothetical situations, movies and just about anything else, you’ve ever overheard at a comic store.

In the interest of being honest, this was the first podcast I ever really listened to on a regular basis. I found that the duo of Smith and Mosier the S and M in SModCo, make up a great dynamic. Kevin talks a lot and has a fantastic wit and imagination while Mr. Mosier is right there as a fountain of information, and as a rock of realism in an otherwise whimsical podcast. 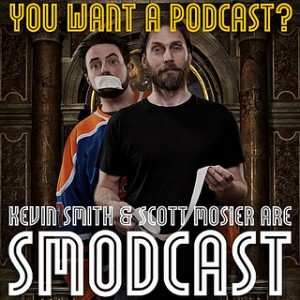 Why should you listen? The simple answer is that it is funny, outrageous and it’s full of what we geeks do; role play. Kevin and Scott don’t just read ridiculous news stories, they tend to pick parts and act them out and they do the same with whatever crazy situations come out of Kevin’s imagination.

In addition, the live shows that are sprinkled throughout the (at current count) 255 episodes are quite a little departure. The dynamic duo doesn’t just get up there and to the podcast in front of people, they interact with them as well, which adds to the depth of those live shows.

What you need to know. Nothing. Although they do reference earlier shows from time to time, you don’t need the full timeline, you can pick up from the beginning or just pick a random one to listen to. 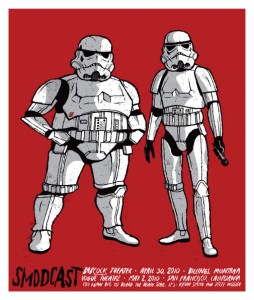 When to enjoy the podcast? I listen to SModCast at work, but it does at times lead to some awkward moments, as I listen through my speakers and not through headphones. If a coworker stops by while Kevin is talking about how much he loves his fleshlight, well, that could be awkward, so don’t listen at work without headphones unless your workplace is open to crazy. I would suggest listening to this while you work, the stories are interesting and the funny and hysterics aren’t a constant flow, most need setup and you’ll get a good laugh from time to time. I just suggest you use headphones. 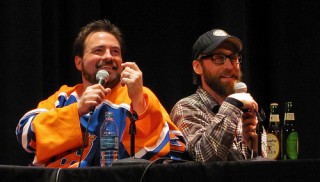 Kevin Smith and Scott Mosier do a Live recording of SModCast

The last statement. You don’t have to like Kevin Smith movies to like this podcast. I enjoy the dynamic between Kevin and Scott, it’s the glue that keeps the podcast together. Honestly, I have a bit of a man-crush on Scott, the dude isn’t your normal comedic straight man and it just adds more depth to what at times can be a shallow or deep podcast, usually, all in the same episode.

Extras: SModCo has SIT! SModCo Internet Television! Where you can find animated vignettes of many SModCo podcasts including SModcast. If you want to test drive some SModCast, I suggest you start by watching a few of their animations on YouTube first. It’ll give you a great idea of what you’re getting into. From there you can make up your mind. Or just take my word for it… Listen and laugh.