Palmer and Max: An Odd Pairing of Two Old Cats 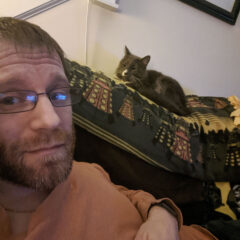 Max is my friend. It was unforeseen and evolved in a way that has baffled my partner Stef since he took a strong liking to me, especially since she would love to have that connection with him.

How did this happen? I have some ideas, but it’s probably a combination of many things – some are worth sharing while some are still unknown.

Max first came to my house with Stef’s mother who was staying with us for a while. He arrived after a long car ride and basically spent his life with two women until that point. I was not the first male he ever encountered, for sure, but I was the first one he would be living with. We certainly kept each other at a safe distance for a while.

I wasn’t entirely open to having a cat, but I welcomed him as part of the family because to Stef and her mother, he is. So, there he was. Then, Stef’s mother moved to an apartment that was not pet-friendly, and Max’s stay was extended indefinitely.

While Stef’s mother was still staying with us, she got up with Max to feed him breakfast. He gets wet food in the morning and at dinner, he receives his hairball remedy treats as fed to him by whoever was around at that time. In the beginning, it was not me because I wasn’t “programmed” to think about feeding a cat. 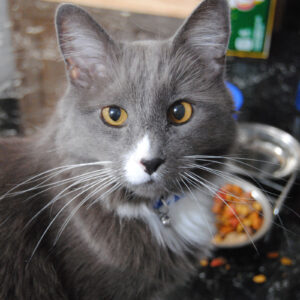 With just two of us humans remaining in the house, and his normal breakfast caretaker gone, Max chose who would get up with him next. And while that was originally not me, I am the one who gets up earlier. Eventually, because cats are not dumb, he figured that out. Now, he is pretty much my furry alarm clock, waking me between 5 and 6:30 a.m. with no discernable snooze button.

When he wakes me up before 5 a.m., I close the door with him on the outside because I do need to function. But when I do eventually relent to his vocal stylings, pawing, clawing, and head-butting (called bunting apparently), down to the kitchen we race. He always has to be down the stairs first, but I have no idea why.

From there, Max has come to understand that coffee comes first. Once, the coffee is brewing, I turn my attention to getting him his wet food breakfast, freshening his water, and making sure his dry food is topped off.

That’s the morning routine. But that’s just one piece.

Let’s talk about consuming media on the living room television.

When Stef’s mother was here, Max spent most of the time with her. When Stef moved in, Max and her mother were together all of the time, so it makes sense that their habits continued here in the house. But occasionally, Max would climb up on the top of the couch and curl up late at night while I was watching television, no matter what it was.

That’s where it remained for a while. Even after Stef’s mother was gone, he would just be up on top of the couch, or in his cat bed, which for his first few months here virtually didn’t exist to him. 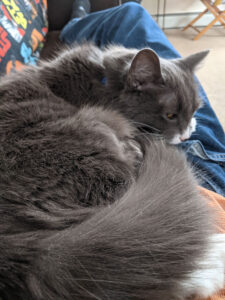 Then, and it’s been so long now that I don’t know when it happened, one day he jumped on my chest while I was lying down on the couch and decided he was comfortable enough with me, or perhaps just comfortable enough anyway to lay down on my chest. This has now become part of our routine. If I’m laying on the couch, even if I’m reading, Max will come to the side of the couch, give a slight meow and then jump onto my chest. Then, occasionally there will be some bunting, and then he makes himself comfortable. In this way, I cease to be a person to Max; I’m just a bed.

It progressed slowly. First, he became used to me being the man who feeds him in the morning. Then, he grew to be physically comfortable on top of me. Now, he even lies in bed with me.

When I lay down for the night, whether it is to finish watching something, to read, or to sleep, Max will jump on the bed and make himself comfortable between me and the side of the bed. He could decide to make himself comfortable between Stef and I or, as was the case for a long time, at Stef’s feet, or in the chair of the bedroom that has become his. But for at least 10 minutes on average, he now curls up next to me on the bed, no matter how much room he has. He seems to enjoy having some limbs off the side of the bed. I’ve given him more room, and he doesn’t seem to care. 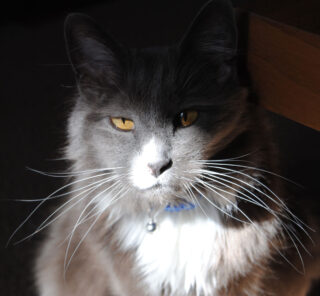 This wouldn’t be odd, excepting that one night I was at my computer later than normal, and he came into my office and was very vocal. I finished what I was working on, shut it all down, freshened his water, and topped off his food, and he was still agitated. It was late, so it was time to turn in. Once I got into bed, he curled up beside me and his motor started to run, so I can only imagine that he wanted to go to bed and it was my fault for keeping him up late.

Yes, of course, Max has grown on me as well. I’m not a heartless person, but I don’t know who’s more attached at this point. He was a guest, and now he’s part of the family and this is his home. Will he eventually end up back with Stef’s mother? It’s not a conversation anyone is willing to have. Stef has become attached to having him. Max has become attached to me, and that’s where I leave it for now.

There are plenty of other stories. He has a “producer” chair in my office, where he sleeps while I work. If I spend too much time in the basement, especially when Stef is out on errands or traveling, I get followed around the house as if I had left and finally came back. He’s also always begging for food, despite knowing that I am not weak enough to give him anything, compared to some others. I will say this, though – there have been huge jumps from the strangers we were to the housemates we are now.

Max and I have become friends. We have a routine, and it didn’t happen overnight. But he’s no spring chicken, so perhaps he senses my “old soul” and we’re just two old men connecting on a different level. Perhaps he just likes that I feed him and that I’m a warm couch. Perhaps it’s much more than that.

I’m not going to question it. It is what it is. He’s my furry alarm clock, a sometimes blanket, and not just a pet but (and this is as much a shock to Stef and her mother as it is to me) my friend. 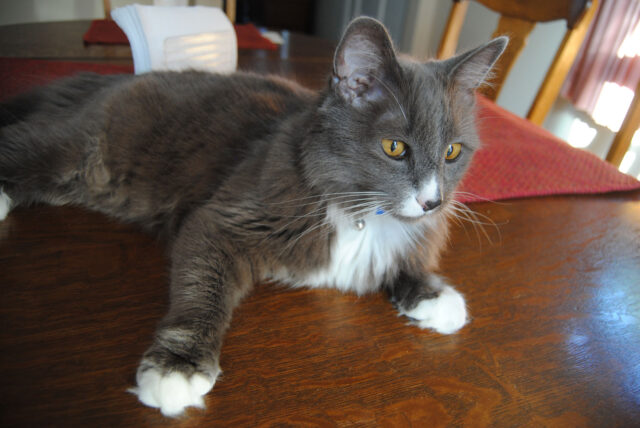 Look forward to great fortune and a new lease on life!
Nothing in the world can take the place of persistence.
Fame and fortune are coming your way.
More Fortunes >