The Blue Bomber, the Maverick Hunter, the one and only Mega Man Coming to Super Smash Bros. 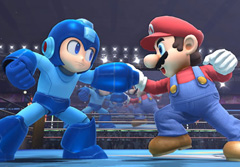 Fewer things made me happier today than Nintendo’s announcement about additions to the lineup of fighters in the “Super Smash Bros.” series. No, I’m not talking about the “Animal Crossing” villager or the “Wii Fit” trainer. (Seriously, Nintendo, what the hell were you thinking with THAT one? No Little Mac announcement during E3? Blech.)

I AM talking, however, about the addition of the Blue Bomber, the Maverick Hunter, the one and only Mega Man! There’s plenty to dissect in the trailer released today as part of the Nintendo Direct address, so we’ll start there.

First of all, there’s the obvious Dr. Wily stage outside of one of the many iterations of the evil genius’ skull-shaped castles of doom and reanimation of dead robots. Honestly, how many copies of Guts Man did he have in the first place? 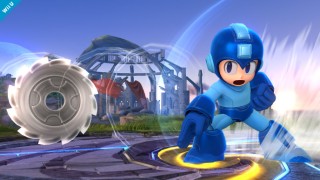 Mega Man’s attacks hit a pretty wide range in the first portion of the trailer, but it’s also where we have to begin to add a lot of speculation to his gameplay. There’s the expected Mega Buster, slide attack (thank you MM3 and all games that followed), but then we get something pretty unexpected.

Is… is that a Shoryuken knocking Samus into the air above a boxing ring? If so, how many other Capcom goodies are hidden in his programming? Could we see the return of the secret Hadoken from Mega Man X? And do we have any legit hopes for Little Mac to be a true playable character?

We spot Rush, briefly, and there’s a hint of the charged Mega Buster before Rock is thoroughly thumped by some of Nintendo’s finest. This is where things get interesting.

For a trailer, there sure are a lot of special moves illustrated from Mega’s extensive lineup.
In order of their appearance in the clip, we have:

That’s five more weapons than a traditional B+ arsenal can handle, which only leads to more speculation.

Harkening back to the MMX days, will players be cycling through the special powers with left and right triggers (and will his color scheme cycle with it)? Or could this signal the introduction of a sophisticated combo system in SSB?

More-so, will players be limited to the number of powers they can use in battle (a la Pokemon trainer, who has just three Pokemon to fight for him)? Would you choose three powers per match as you select the color of your outfit? 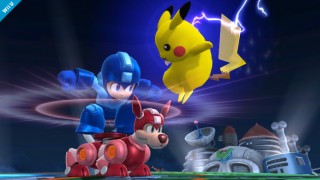 Personally, I’m interested to see if Mega has all of these powers as soon as he’s unlocked. I’d actually prefer a deeper reference to the Mega Man games themselves. Knock out Mario and pick up the flame blast. Kick Pikachu to its doom and earn the spark shock. Blast Bowser and unlock the slash claw. There are plenty of ways to assign classic powers to the Nintendo universe.

And what’s going on with the Yellow Devil cameo? Will it be a mini-boss in some yet undetailed adventure mode?

Finally, because new gameplay shows a return of the SSBB Smash Ball via shots of Samus’ Zero Laser, I’m dying to find out what Mega’s final smash will be. Will he adopt his X armor and wield Zero’s light sword? Will he tag team opponents with his “big brother,” Proto Man? Will he create some crazy Rush-Beat-Rock hybrid like he has in other fighting games?

There’s a lot of questions left unanswered, but that’s half of the fun with trailers like this.

Good clothes open many doors. Go Shopping.
Even the greatest of whales is helpless in the middle of a desert.
You are interested in higher education, whether material or spiritual.
More Fortunes >