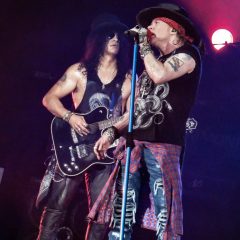 I’m a fan of Gun ‘N Roses. I love the old stuff, I love the solo stuff and I like and love some of the new stuff. So the other day when I was listening to Duff McKagan’s Loaded album Episode 1999: Live, I noticed something peculiar, albeit completely understandable considering the facts.

During Mr. Brownstone on Guns ‘N Roses: Live Era ’87-’93, which is track 2 for those people who still have CD’s around the 4 minute and 20 second mark you can hear Axl chastise the crowd and ask them to take a step back, because the people up front are getting crushed. For the sake of the set up I should point out that that live track was recorded in London during a concert on August 31st, 1991.

Now, on Mezz, track 8 on Duff McKagan’s Loaded Album Episode 1999: Live, about the 3 minute and 19 second mark, you can hear Duff say “Hey, you’re crushing those people up front. Everybody move back.” Eight years apart and yet you have to consider that Guns ‘N Roses members, the original members more specifically would be vary wary of situations like that. Why?

Well, the original lineup was on the stage in 1988 at the Monsters of Rock concert in Donington Park, when 2 kids were trampled to death while the band played on due to a surge forward in the crowd. Although, they were not told of the deaths until afterwards, the press and the public had a field day and bad press came a calling.

While the facts now suggest, they did the right thing playing on, as the crowd, in hindsight, probably would have rioted, then they were essentially handed a black spot. The riots Axl caused by being Axl excluded, I would assume that those original members, remember the pain and helplessness they felt and thus in two live albums recorded 8 years apart, you can hear them trying to be proactive when they look down into the front row and see pain, not the expected emotion in the front row of a rock concert.

So, is it something that plagues Guns ‘N Roses and it’s original members or is it just a coincidence? I’ve been to concerts and listened to live albums and still those two instances are the only times I’ve heard the act ask the crowd to step back. Thoughts?

Even the greatest of whales is helpless in the middle of a desert.
To let another into your heart, first let yourself in.
Let’s finish this up now, someone is waiting for you on that.
More Fortunes >